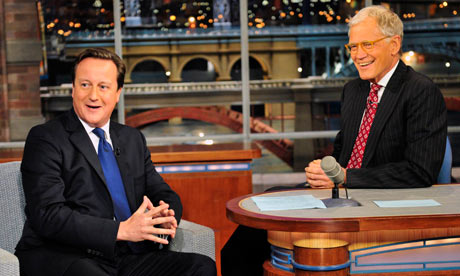 By now you will probably know that David Cameron, Prime Minister of the United Kingdom of Great Britain and Northern Ireland and leader of the Conservative Party, made a fool of himself on the David Letterman show a few days ago. When asked to answer who'd composed Rule Britannia and what the meaning of Magna Carta was he fluffed his lines whilst looking rather uncomfortable.

As soon as I found out the first thing I said to myself was: send that boy to Cuba! There's still time to save him. You see, in my native land he'd have been given a ticking off by his teacher, sent to the back of the class first and straight after that to the headteacher, because of "ideological problems".

On a more serious note, I can understand the brouhaha about posh Cameron not knowing bits of the history of his own country. Especially when those two questions are apparently included in the citizenship test all non-Brits have to sit in order to become a citizen of this nation. Shall we, then, deport our PM? Perhaps to France?

However, I suspect ulterior motives behind Dave's alleged "lapsus mentis". His slip happened days after the Andrew Mitchell incident. The Rt Hon MP for Sutton Coldfield, supposedly insulted a police officer at Downing Street, swearing at him and calling him a "pleb". All hell broke loose. Both broadsheets and tabloids laid into the Member of Parliament. Comment pieces remarked on the very conspicuous fact that the coalition is made up of "toffs", rich boys who have turned the government into the equivalent of a private club. After everyone calmed down, though, I began to think, oh, well, that's a coincidence. First Andrew allegedly insults a police office, then, Mr Cameron goes on the Letterman show and... hmmm... I smell a rat here. And I think that we, Joe and Joanna Public, have been taken for a ride.

Look beyond the smokescreen created by Mitchellgate and Cameron's Rule Britannia "moment" and you'll be able to see what the government doesn't want you to notice The coalition knows that they're in deep trouble. The cuts they've implemented for the last couple of years are not working. On top of that they had no mandate to do so. Andrew Lansley was fully aware that by messing with the NHS he was playing with fire. And yet he did press on. And even though he got his wish in the end, most of his reforms were passed through Parliament, even David Cameron realised that Lansley was damaged goods. He was moved to another department during the recent cabinet reshuffle. The word on the street is that Labour wants to call a general election as early as 2013. And the polls point at a heavy defeat for the Tories.

Hence David's "oops" moment. Even a posh boy like Mr Cameron should know very well that Americans are suckers for all things royal and historical. They don't mind the Queen as long as she doesn't attempt to rule them again. Look at the reception the Jubilee got across the water. I remember reading a piece in The New York Times online (luckily, it was one of the freebies that you didn't have to pay for). I was surprised at the sycophantic tone used with Ma'am and family.

My guess is that David knew the type of questions he would be asked. And his spin doctors gave him just the one option: pretend you don't know the answer, that way you don't come across as too public-school boy (thus, distancing himself from Andrew "pleb" Mitchell). Plus, you can put one over Boris Johnson, the London mayor, who had been on Letterman a few months before and proved to be a very likable and funny guest.


These are not easy times in the UK. Contrary to The Economist's recent editorial, growth is still too negligible for us to make a song and dance about it. And the scenes being streamed to our television sets from Spain and Greece are not pretty. Massive protests and rubber bullets being used on protesters. Graffitis showing that people have no fear because they have nothing to lose. I don't think the coalition would be too happy about a UK version of these events. And if in order to avoid this it takes the British Prime Minister going on a  popular talk show and making a total tit of himself, then it's a price worth paying for.

There's a similar situation across the pond, in the States with the race for the White House in full swing. When you get political spouses like Ann Romney making comments like: "I guess we better unzip him and let the real Mitt Romney out" you know that she's trying to divert your attention from the issues that really matter. Sorry, luv, thanks, but, no, thanks, put it away. Alternatively, can you two get a room, please? Because I don't think the US electorate is interested in seeing that Romney. What they would like to know is what sound policies he's got in store. If any.

That's why I couldn't give two hoots about what Andrew Mitchell thinks of hoi polloi. I know exactly what he thinks of people like me. Same with Cameron. Who cares if he can't remember who wrote Rule Britannia or Beowulf, for that matter? No more distractions, please. We're intelligent people. Tell us how you're planning to fix the country. Otherwise, I will have to send you, naughty boys, to the headteacher.

Labels: A Cuban In London, Cubans in London, music, The Richest Man In Babylon, Thievery Corporation