Literature is made up of some essential ingredients in my view. For a start the book in my hand has to entertain me. But not in a way that might be interpreted as condescending. I can't stand authors who show no respect for their audiences and appeal to their lowest common denominator. Hence my preference for literary pieces that have an in-built mystery, a je-ne-sais-qoui about them that lures me into their plot. After the entertainment part come story, characters, setting and the like. The meat, so to speak. Sometimes I like a lineal structure, some others I like a bit of experimentation with the narrative. Regardless of the genre I usually like a bit of adventurousness, a bit of spice. The author's literary pedigree also plays an important role in my decision to pick up a certain book. I am very loyal when it comes to reading.

The fourth elements are joined at the hip: the when and where. I have on occasions begun books for which I wasn't ready yet at the time of picking them up. The result has often been disappointment, especially when I was a teenager. However, years down the line I have opted for the same book and the outcome has been more satisfactory. The where refers mainly to the place(s) in which  I choose to read. My holiday list is usually full of re-reads as I have been in that awful situation before where a newly-purchased book you have high hopes for turns out to be a dud. What I read on a beach differs greatly from what I read at work during my lunch break. This where is also rooted in  my penchant for certain places. For instance, I have a couple of corners in my house where I can be found in the early hours of the morning devouring a good novel or poetry collection.

But life has a way of throwing unexpected surprises in one's path and this summer I found myself breaking my own rule. During my recent holiday in Ravello, Italy, I took three books with me which I'd never read before. One was a non-fiction tome (I must admit that my decision was based more on the fact that I hadn't yet finished reading the book in question by the time I'd boarded my flight to Italy than unbridled passion for its subject matter). This was followed by a collection of short stories that came free with The Guardian some months ago and lay unthumbed on my bookshelf. Then just as my holiday was almost over my eyes alighted on a collection of poems by the author and fellow blogger Judy Croome.

It's the latter that makes up the bulk of this post tonight. Because it deals with that when and where I mentioned before. Judy's book, a Lamp at Midday, is divided in two sections: Into the Full Moon and Vignettes of Life and Love. The first one deals with Judy's father's death, an event about which she even wrote on her own blog and which I imagine left an indelible mark on her. The second part focuses mainly on Judy's celebration of her own endless questioning of all things spiritual. 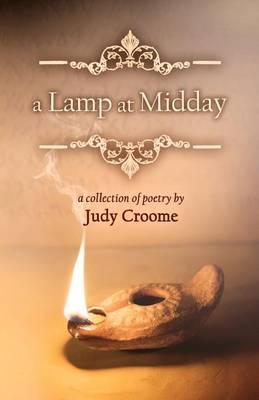 a Lamp at Midday (I've decided to keep the title in the same way it appears on the cover) is that rare creature that manages to confound expectations. After reading the introduction I wondered if it'd been a wise decision on my part to bring a series of poems about death on vacation with me when all around me was bursting with life. But I'm happy to say I was wrong. Very wrong. First of all, Judy's book is not about death per se but about emotions. Especially the opening section is about this person whom she calls her "'pardner', hero and father". As the author herself explains, the inspiration for many of the poems came from her father's obsession with the full moon. Apparently after his first major stroke he was convinced God lived in the moon and, according to Judy, he would spend hours watching and praying to the moon. As a full moon, similar, I'm sure, to the one of which  Judy's dad had gradually grown fond, lit up the beautiful expansive Ravello coast, I became convinced that I'd made the right decision about bringing this book with me on holiday. The when and where began to make sense.

The opening salvo in the collection is a beautiful reflection of a particular moment shared by father and daughter together. Called simply The Painters, the pair's internal dialogue alternates with the hustle and bustle of the streets outside.  There's mention of children's laughter and dogs barking. And also of Changing worlds from grey to green/Never touching our love.  The Long Corridor starts with two questions that later echo throughout the poem: Can love run dry/Can love run out... even die? I read Full Moon during one of the most beautiful thunderstorms I've ever seen in my life. Its lines were pregnant with a lyricism that matched perfectly the syncopated rhythm of the fat raindrops hammering on the roof of our house. The first stanza had a magical, mesmerising melody of its own: Walk with me/O my soul/Walk into the white light of the Moon/Where my loved ones cannot follow?Nor I return. It will probably spook readers a bit when I tell you that our very own Italian version of a full moon came out brighter than ever after the downpour.

I read the second part of the book, Vignettes of Life and Love, on the way back to London. I started it at the airport in Naples and finished it as our aeroplane circled around western London, Heathrow bound, ready to land. The title poem, A Lamp at Midday, was a mystical rumination on a man's search of his beloved. The metaphor of the burning wick flickering in the warm breeze, waiting to be quenched by the breath of my beloved was a fine homage to those of us who spend our lives looking for "the one who flies", to half-quote the Argentinian poet Oliverio Girondo.

With so much richness of verse and tropes, I could even forgive Judy her moment of self-doubt. This arrived in the last poem of her fantastic collection, Will Anyone Ever Read This? I could sympathise with her feelings and emotions and I wonder who, amongst us, writers and bloggers, hasn't felt exactly the same: I pour my soul onto the page/Word after word/I tear from the ether of my mind (...) But no one will ever read this/My voice drowns/In the resplendent chorus of a million voices/Each with a story of their own/Who, then, is left to read my ordinary dreams?

Us. That's my answer. Literature is made up, in my humble opinion, of some essential ingredients: plot, magic, characters. But there's also the when and where. The moment when you realise that you were meant to read that particular book at that particular moment in that particular place. It happened to me with a Lamp at Midday, and I hope it happens to you, too.

Next post: “Sunday Mornings: Coffee, Reflections and Music”, to be posted on Sunday 14th October at 10am (GMT)
Posted by A Cuban In London at 23:59

Labels: A Cuban In London, a Lamp at Midday, Cubans in London, Judy Croome, Of Literature and Other Abstract Thoughts, poem, poems, reading