There she is just like everyday. Dirty, blue coat covering her slender frame, thick-rimmed glasses sitting on the bridge of her nose and a hunched back pinned down by the weight of her years. There she is just like everyday. Braving the cars while kneeling down on the road named after a county in East Anglia, checking under the parked vehicles, not once looking around to see what the traffic going past her is up to. She just keeps searching, checking, seeking... what? I don't know. I see her when I drive my daughter to school. My little one's also noticed her. The elderly, grey-haired woman who's always clutching the same dirty, blue coat, rain or shine, winter or summer. My daughter asks me "What's she looking for?" I don't know is my answer. At first I thought it was cigarette butts. It was common in Havana in the 90s, why should it be different in London in the noughties? But no, this woman is searching for something else. Her lost past, a dear relative who died in dire circumstances, or shall we go for the grandstanding statement: her soul? Or maybe there's no rational explanation for her out-of-the-ordinary daily activity?

If all the world's a stage on which we're merely players, surely it should follow that there ought to be leading and supporting roles on it for all of us. It's the latter we rarely remark upon. The bit-players, like this woman, who help (involuntarily, mind) make our lives more bearable and colourful. Even if sometimes their contribution comes at the cost of their health, physical and/or mental.

We all know who these characters are. They're the silent ones (although that doesn't necessarily imply introversion) who become accidental backdrops to our lives. The irony is that we only notice them when we stop seeing them all of a sudden. It's like the unexpected realisation that Cezanne's Still Life with Onions is missing a pungent bulb. That happened to me once, actually. I dreamt that a couple of onions were gone from the painting. The dream was so vivid that I woke up concerned that there were just ten onions instead of the sixteen - if I got the number right - that appear in the still life originally. 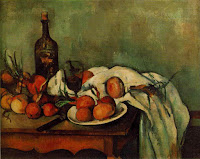 It's strange to think that this supporting cast can have such a deep impact on someone's life and yet sometimes we're unaware of it. Cuban readers of my generation will probably still remember Guagüita, a tall, lanky, black guy who pretended to be a bus (hence his nickname, "Little Bus") and travelled down Havana's main avenues standing his ground against the mad traffic around him. He obviously had mental problems and legends about him abounded. Some said that he'd been a bright university student once who'd burnt out too soon. Others attributed his state of mind to love; he'd been rejected by a woman for whom he'd fallen head over heels. Whatever the reason for his mental deterioration, Guagüita became part of the cityscape with which I grew up. I can't recall when I first saw him or when I last spotted his registration number (he had one, tucked in his belt and beaming at the vehicles behind him). I do remember once my friends and I riding our bikes, cycling past him and shouting out: Guagüita! Guagüita! And he waved back. Ironically he could have taught some drivers a thing or two about being careful behind the wheel. He did all the manoeuvres perfectly, including indicating, braking and overtaking.

These are the real characters of one's life, the unsung heroes whose presence we recall with misty eyes and grey hairs. Like the elderly gentleman who turns up at some salsa events in London (I've seen him at the Southbank, Clissold Park, Victoria Park and Barbican) dressed smartly and dancing his head off. By the way, it's not precisely salsa what he's dancing, but who cares, he's having so much fun that it's hard to be pedantic about his style.

Our lives are full of leading actors and actresses: our parents, other relatives, our children - those of us who have them - and our friends. Occasionally we step into that role, too. These characters are the ones to whom we delegate the most important lines, the soliloquies that will accompany us for most of our lives. Yet, there're also the brief appearances by a supporting cast whose cameos steal the show every now and then. Their charisma, whether intended or not, is enough for them to leave an indelible mark on our lives. It could be the woman with the dirty, blue coat looking under parked cars, or the young, tall, black man pretending to be a bus, or the actor who played Hamlet the night before and is now on the same queue the morning after. Queuing just like you, laughing at your jokes, fixing you with his tired eyes and asking you about your family. And reassuring you inadvertently that there are still sixteen onions in Cezanne's painting.

And this is all from me for the time being. I will be taking a cyber-holiday for Easter and will return on Sunday 29th April. In the meantime my blog will have music and I'll probably publish a couple of older posts again. Think of them as a couple of tracks from a "Greatest Hits" collection. I wish you all a Happy Easter!