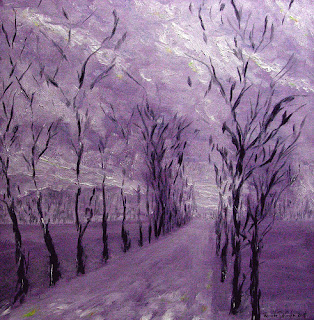 Rain, midnight rain, nothing but the wild rain
On this bleak hut, and solitude, and me
Remembering again that I shall die
And neither hear the rain nor give it thanks
For washing me cleaner than I have been
Since I was born into this solitude.
Blessed are the dead that the rain rains upon:
But here I pray that none whom once I loved
Is dying to-night or lying still awake
Solitary, listening to the rain,
Either in pain or thus in sympathy
Helpless among the living and the dead,
Like a cold water among broken reeds,
Myriads of broken reeds all still and stiff,
Like me who have no love which this wild rain
Has not dissolved except the love of death,
If love it be towards what is perfect and
Cannot, the tempest tells me, disappoint.

Rain, snow, earthquakes. Death is sometimes represented as an uprising of the elements. Nature's way of imposing order, albeit chaotically. Some of us hate to think that we could die on a nice sunny day with a smile on our faces, while out in the countryside with our beloved ones, just as we're living life to the full. Death is the last mile in the loneliness of the long distance runner. All those tiny, teeny, wee, itsy-bitsy steps we take when we're toddlers is a preparation for the marathon of life. Some of us can't bear to consider that there'll be a moment when our bodies will cross the Finish line. Some of us can bear it even less when we imagine that Finish line hovering, unexpectedly, into the field of vision of someone we care for.

Death is the concept with which we'll never be able to reconcile ourselves. It's a fundamental part of our life, but we make light of it, or ignore it. Sometimes we write about it as if to exorcise the demons that embody its omnipresent nature. A few weeks ago I attended the funeral of a close relative of my wife's. He'd been suffering from a long-term illness and I guess that we all, including his wife, expected his demise at some point soon. Just writing those words makes me want to go back and wipe them out. That's what death does to you; it leads you to a point of denial and self-denial. And yet, how can we deny its starring role in our lives?

This man's existence was punctuated by many virtues, but one stood out amongst the others: he was always laughing. Whenever I saw him, he always had a bright smile on his face. I'm sure that his three children, present at his funeral, will have stories to tell of moments of strict parental discipline, but as each of them faced the congregation on that day, they spoke of many well-lived moments, full of humour and merriment.

He died on a Sunday. The funeral was nine days later, on a Tuesday. Why so long? It's a tradition in the UK. Another custom is to celebrate the person's life. Therefore there was music on that sad day. A The Beatles compilation played on piano welcomed those in attendance, followed by a rendition of Standing on a Corner by Frank Loesser.  Irving Berlin's Blues Skies was another melody performed that day and sung by a choir. After the service the family went to a pub where I'm sure - I couldn't join them - many an anecdote about this man's life was shared, many a moment was relived. The "rain did rain upon him" in the end, but amidst the grief, I'm certain that for an instant everyone had the same thought: how lucky they were for having had him in their lives.


In Cuba, we have a different way of dealing with our dead. We bury them straight away. My auntie passed away more than twelve years ago. She died on a Thursday (close to midnight), the wake took place throughout the night and by eleven o' clock on Friday morning we were all making our way to the Colón cemetery. Over the years our attitude to death has made me feel sometimes as if we can't wait to close that chapter. The pain is too much and no amount of happy memories can quench it. We still remember them, our dead, but unlike in Britain where there's a period of mourning, of reconciling oneself to the idea that that person will be no more, back home we tend to shovel soil on the coffin the moment they close their eyes forever. Since my auntie's death I have had an uneasy feeling about things I would have liked to say to her - a second mother to me - even though she was already dead. Then, again, I was only eighteen going nineteen (she died eight days before my birthday ) when she left us. Given half a chance, I might or might not have had the strength of mind and spirit to stand up in front of a congregation of people and tell them how much she meant to me. How lucky we all were for having had her in our lives.

This is not a vis-à-vis comparison between how people deal with death in the UK and Cuba. Nor is it a statement declaring a preference for a tradition over the other. It's rather a mere adumbration, an impressionistic sketching, if you like, of what happens when we give back our life. Today's reflection is full of short brush strokes of bright colours that juxtapose each other creating an odd image. One that is full of light, but also of darkness. Because as one of the greatest singers in the Spanish language, Joan Manuel Serrat, said once: "La vida te la dan/pero no te la regalan/La vida se paga/por más que te pene" ("You get a life/But it's not for free/You return your life/No matter how much this hurts"). And despite our best efforts to seek shelter under our umbrellas, one day "rain will rain upon us".