My late grandmother on my mother's side used to invoke the Divine Providence whenever something went her way. She would raise her eyes to the heavens, beam out that broad smile to which we had all grown accustomed by then and forth her gratitude would pour to whom she believed to be her Maker for his alleged guardianship. Hers was one of those phrases which, no matter where you found yourself on the religious spectrum, had a certain comfort to it. Like the butternut squash and sweet potato soup my wife makes in winter time. 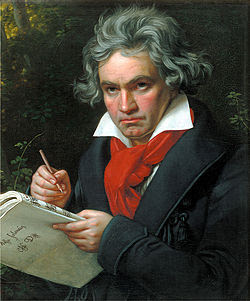 Recently I had cause to also thank a similar Divine Providence, although this one was of the earthling variety and likes writing in the kind of language I call colourful and others label pretentious. The reason for my delight was Will Self's recent essay "The symphony and the novel – a harmonious couple?" (The Guardian Review, Saturday 8th October). In it, good ol' Will explores the reasons why both art forms, although having developed almost at the same time, in the 19th century, have supposedly moved in different directions; whilst one (music) has retained its risk-taking approach, the other (literature) has pressed its finger firmly on the "safe mode" button.

At first sight Mr Self's article smacks of snobbery. He reprises the usual line about novelists not living up to and failing to capitalise on their innovative and modernist moment in the first decades of the 20th century, namely, James Joyce's Ulysses, Proust's Remembrance of Things Past and Virgina Woolf's Mrs Dalloway. Had it carried on in the same vein, Will's article would have ended up in the recycling bin. But his outing contains so many gems, that not discussing them with you, my dear readers and fellow bloggers, is tantamount to treason.

For a start his insight into composing a score and how it compares to writing a novel is thought-provoking. Earlier this year, I mused in this very space over the influence of music on the process of writing. On that occasion, however, I was focused more on the effect certain melodies have on authors, journalists or bloggers and less on the similarities that might exist between the score and the written word. Yet, Will goes one better. For him the symphonist and novelist share key artistic objectives: "The search for motifs, or themes, the creation of an alternative world in words, the struggle for authenticity of narrative voice, the counterpointing of different protagonists' views".

One of the aspects that differentiates us, rational animals from non-rational ones is the way we come up with pictures in our heads of people and situations we haven't seen yet but which fit neatly into the alternative world we want to create. We're capable of widening up the scope of our objective and material world in ways that defy categorisation. In that sense, the writers mentioned by Will did deserve to be included in his list as pioneers. My only grievance is that in his essay he stopped half way through the previous century. But more on that later. The musician works in a similar way to the writer. In my opinion, the composer has an image, a picture in his or her mind that represents the notes that will make up the score. That this language sounds and is more abstract than the written one should not deter us from the fact that it still contains a narrative and characters.

A typical symphony will be structured in different movements. Some will be slower, others faster. But the intention is the same: to induce a state of mind, to manipulate, or tap into the listener's own emotions and feelings. Writers usually work towards a similar goal through a variety of "movements": introduction, development and conclusion. That some authors play around with this formula, tweaking it here and there, doesn't mean that the conflict they present to the reader hasn't got a solution by the end of the story. It just means that the emphasis is on the "how" and not the "what".

On writing about the composer's "sonic cosmos", Will Self addresses the perennial questions with which artists (whether writers, painters or film-makers) are faced: how much do I reveal about my unique inner world? And will this chime with the reader/viewer/listener? The answer is: you reveal as much as you like, or as much as your manager/publisher/agent allows you to; and you might or might not care one jot about what your future audience thinks of you work. Which, some of us might say, is almost career suicide. 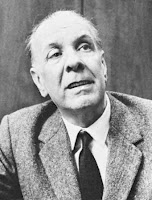 And yet without the bolder approach question two demands, we wouldn't have had the likes of Astor Piazzolla and Jorge Luis Borges.

Borges' inclusion was not accidental. Mr Self only gives examples of novels, mainly from a distant era. It's as if Kundera and Rushdie had never happened. As chance would have it I've just read two books (plus a third one, being digested as I write) that could well serve as an example of Will's thesis despite the fact he refuses to acknowledge contemporary fiction. The Road is a sparse and laconic novel which takes place in an apocalyptic future. The language used is redolent of literary thriftiness, bereft of tropes and as bare as the grim and cold environment the book depicts. We could probably compare it to a piece by Phillip Glass. The Road was followed by Interpreter of Maladies, a fantastic collection of short stories that functioned better as a well-written exercise in voyeurism than as straightforward literature. It reminded me of Mozart's Symphony No. 25 in G Minor (or Little G Minor Symphony). The Curious Incident of the Dog in the Nightime, the novel I'm reading now, falls within Will's remit of "struggle for authenticity of narrative voice" and "the counterpointing of different protagonists' views". The main character suffers from Asperger's syndrome and everything we experience in the novel is perceived from his point of view. It's challenging for the reader, I can only imagine how difficult it must have been for the writer. The musical equivalent? One of piano prodigy Art Tatum's short compositions.

And therein lies the rub, too. Will mentions jazz briefly at the beginning of his essay (John Coltrane and Thelonious Monk) and you can see why. Jazz, especially in the States, became one of the most revolutionary art forms after the Second World War. Against the safe, rhythmic patterns of a Gershwin or an Armstrong, you suddenly had the likes of Charlie Parker blazing the trail with the hard sound of his bebop. But in literature there was also a shift. The Beat generation, just to give one example, possessed that "self-enclosed expressiveness", which Mr Self attributes to Monk and Coltrane. Their writing might not have had the same degree of experimentation Joyce and Woolf displayed, but there was inventive craftmanship aplenty.

On the whole Will's article is a beautiful elegy to two art forms that have brought pleasure and joy to millions and whose essence remains (despite the current Ikea approach to fiction- and song-writing. Your work is already boxed in; all you have to do is assemble it) the creation of alternative scenarios in which the human experience can be seen in all its glory. Whether guardianship of a Divine Providence is included or not, it doesn't matter. It's still welcomed all the same.

Next Post: “Sunday Mornings: Coffee, Reflections and Music”, to be published on Sunday 4th December at 10am (GMT)
Posted by A Cuban In London at 23:59