I was recently on a train, travelling from Gatwick airport to London with my earphones and mp3 player on. Up until then my little device had behaved itself, sending up tunes that were suited to my mood: I'd just said goodbye to my mother, who had stayed with us during the summer. I wanted music that was neither of the weepy type, nor of the uplifting kind. My mp3 had seemed to copy my brain's instructions fairly well; I did not have to press once the 'skip' button as I made my way to the train station.

The book I'd brought with me to read on my way back to London also fell in the 'neutral territory' category. It was 'A History of God' by Karen Armstrong, a British author who has written extensively about religion, its origins and influence. However, whilst I welcomed the distraction the book brought me, how it took my mind off my mother's return to Cuba and the fact that I would not be seeing her again for some time (years maybe?), I had no reason to suspect that both my brain and my mp3 player had colluded, unintentionally, to give me a little surprise. 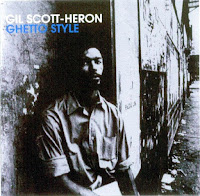 Halfway through my journey Gil Scott-Heron's 'Did You Hear What They Said?' kicked off on my mp3 player. This song is a powerful lament about the loss of a young person's life, the circumstances surrounding it and the author's blatant refusal to believe something like this could happen. Precisely at that moment I was finishing the first chapter of my book, 'In the Beginning'. To be even more exact, I will quote the fragment I was reading as Scott-Heron's melody reverberated in my ears:

"Despite his earthbound approach and his preoccupation with scientific fact, Aristotle had an acute understanding of the nature and importance of religion and mythology (...) Hence his famous literary theory that tragedy effected a purification (katharsis) of the emotions of terror and pity that amounted to an experience of rebirth."

Unlike Karen's 400-page treatise on religion, Gil uses only twenty-six lines to express his incredulity and anger. Out of this twenty-six verses, though, nine are repeated throughout the tune. This renders his song poignant and cathartic, especially as it crescendoes towards the end. Listen to the final stanza and I dare you to remain dry-eyed: "Did you hear what they said/Yeah did you hear what they said/Did you hear what they said/About his mother and how she cried/They said she cried, 'cause her only son was dead/They said she cried, 'cause her only son was dead/Woman, could you imagine if your only son was dead/And somebody told you, he couldn't be buried/hey, hey, come on, come on, come on, come on/this can't be real."

Reading and listening to music at the same time are like the coloured lines I see in those charts in The Economist magazine. One indicates domestic growth, whilst the other points at per capita spending. At some point they will cross paths, but this happens very rarely. I admit that I like listening to music whilst I read, usually of the non-intrusive variety. Jazz and classical music get thumbs-up whereas anything with words in it is either skipped or muted. However, this attitude puts me in the pro-Muzak group, an association I strongly dislike, as I'm all for listening to music with intention, not as if one hated it so much, that it has to go and stand in a corner like a child that's been grounded. There's another quandary when you listen to music (with words) whilst reading. In the best case scenario the lyrics will add value to the book you're reading. Yet, do you really need that addendum? After all, the reason to read a book is to immerse yourself in the plot (in the case of fiction). The downside, on the other hand, is that you might end up paying more attention to the music - that's what usually happens, doesn't it? - and will forget about the plot. Then, why bother to read at all?

But occasionally, especially when I'm on the go, book in one hand, mp3 player in my pocket, I don't mind tunes with words in them. In fact, sometimes the phrases on the page complement the lyrics in my ears. That's what happened with that Gil Scott-Heron song. I've listened to it many times; it's one of my favourite tracks by the so-called grandfather of rap. And yet, on that train journey from Gatwick to London, I was moved by it more than at any other time. Mathematically speaking, it was the combination of both 'neutral' and real elements that did it for me: non-fiction book about religion+electronic gadget churning out high-quality pop+my mother's return to Cuba=reflection about the end of polytheism and the start of monotheism in the world and the consequences of this transition.

Gil's song builds rapidly due to its short duration. Still, even after having heard it countless times that second verse is probably one of the more distressing ones I've ever heard in my life: "Did you hear what they said/Did you hear what they said/Did you hear what they said/They said,they shot him in his head/a shot in the head to save his country/a shot in the head to save his country/Come on, come on,come on,come on/this can't be real." Involuntarily, as I listened to these lines, I somehow created an internal debate where on one side I had Scott-Heron's harsh, poetic reality playing against Karen Armstrong's explanation of Nirvana on the other side: "We are told that Nirvana is a permanent, stable, imperishable, immoveable, ageless, deathless, unborn, and unbecome, that it is power, bliss and happiness, the secure refuge, the shelter and the place of unassailable security..." Well, no, it isn't, if you get shot in the head and then can't be buried.

I already anticipate posters leaving their comments this week to be split between those for whom silence should be the only companion when reading (or writing) and those who don't mind the nasal intonation of an Amy Winehouse or the drunken inflection of a Tom Waits when diving into the depths of Borges, Munro or Chesterton's works. What I've personally found is that when I listen to music whilst reading not only does the world around me change slightly, but also the one inside.

Next post: ‘Sunday Mornings: Coffee, Reflections and Music’, to be published on Sunday 16th January at 10am (GMT)
Posted by A Cuban In London at 23:59

Labels: A Cuban In London, Cubans in London, Gil Scott-Heron, Karen Armstrong, literature, Of Literature and Other Abstract Thoughts, reading