Some years ago, when I still worked for a local arts organisation as a project manager, I walked to work almost every day (or else I biked). Every morning I made the same short journey, accompanied only by the sound of my CD player (these were pre-mp3 player days). And on every occasion I ran into the same familiar face: the road-sweeper who kept our streets clean. Sometimes I would stop to ask him how he was, or to enquire about the music to which he was listening (he, too, wore headphones whilst doing his job). 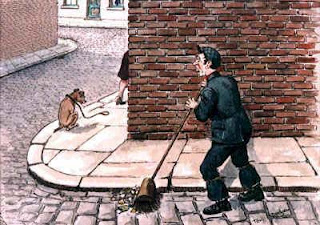 His mood was usually cheerful, his demeanour humble, his features youthful, although a few wrinkles on his face pointed at an older age than the one I accorded him.

In my mind this road-sweeper was a hero of some sort. Yes, I know that he was only fulfilling his professional duty, but the way he went about his work, not only making sure that the pavement was litter-free, but also that there was no rubbish anywhere near the kerb, was a spectacle to behold and praise.

Throughout my childhood and adolescence I grew accustomed to heroism with a capital 'H'. We, Cuban students, were educated in the shadow of all the men and women (especially the former, less attention to the latter) who'd given up their lives fighting for our independence. Our pledge ran thus: '¡Pioneros* por el comunismo, seremos como el Che!' ('Pioneros for communism, we shall be like Che!'). Of course, there was always the joker at the end of the line who whispered: 'What? Asthmatic?'

Hence my change of mind when I hit my twenties. I began to see more heroism in the modest woman who turned up to work at my local cinema everyday, despite the lack of viable transport options, than in the general speaking on the telly about courage and selflessness, then retiring to his big house in the suburbs where a table full of food awaited him.

My initial scepticism about all things heroic was given a boost when I moved to the UK. I realised very soon that I shared the same cynical British attitude towards what sometimes was nothing but emotional blackmail. A lot has been said and written about the Blitz spirit, and occasionally the idea of people going about their business as per normal after an atrocity (for instance the London bombings on 7th July 2005) might be viewed as defiant, but really and truly, did people have an option? I'd sooner believe that Britons' famous resilience, no-nonsense attitude and deadpan, dry sense of humour are more influential factors in how they deal with emergencies.

In my opinion there are many scenarios that beget heroes and heroines. One of them can be the one-off event, for instance tsunamis and terrorist attacks. The unpredictability of the situation, plus our own survival instinct make us behave in ways of which we were probably unaware before. Just as there are many cases of human cowardice in the face of disasters, there are plenty of tales of courage and bravery. I would like to believe that the latter outnumber the former.

Another scenario involves everyday life and mainly people at the bottom of the social and economic ladder. It's called daily grind. Bread and butter. Nine to five. We come up with words to describe this kind of contribution: menial, rut, toil. There's no glamour in it. And yet, in my book, I view it as important as, or more important than 'one-off heroism'. Right now, outside my kitchen window I see men spreading rock salt on the pavement in almost subzero temperatures. The postman/woman delivered our correspondence today as if the Arctic weather was merely a blow of the nose. In a couple of days the refuse collection people will arrive at my door (I'm writing this post before Christmas) and empty our recycle bins in their lorry. As I mentioned before, you might think that these people are just doing their job, but let's consider that idea for a second. The post office faces an overhaul which could leave thousands of its workers without employment. Local authorities have been told to cut back their budgets, which begs the question: how many of those refuse collectors will be facing the sack in 2011? And still, they go about their business as per normal, in the face of an uncertain future.

Around the same time I met this road-sweeper, I found out through my local volunteers' centre that my borough had decided to award prizes to 'local heroes'. I picked up a form without having any second thoughts as to who I wanted to nominate. But I had to let the candidate know beforehand. One day, on my way to work I saw the cleaner early in the morning and stopped to explain to him why I thought he should get the red-carpet treatment. His response still resonates in my ears after all these years: 'Me, hero? No, mate! I'm just doing me job'. I smiled, shook his hand and chucked the form in the next bin.

Disclaimer: The clip this week contains some strong language but I have not seen many cover versions of Lennon's 'Working Class Hero' as beautifully sung and heartfelt as this one. I hope you enjoy it.