We need a Facebook campaign. We need to take immediate action. And we need a colour, too. Georgia had a rose revolution, Ukraine an orange one. Burma went for saffron to enliven its social uprising whilst Iran's one gave us a spring green. And as we saw recently in Tunisia jasmine was the scent and tincture that permeated their insurrection. Let's have, then, a silver-letters revolution. Let's rally our argent-uniformed troops against the Philistines bent on wreaking havoc on one of humankind's cultural bastions: the local library. 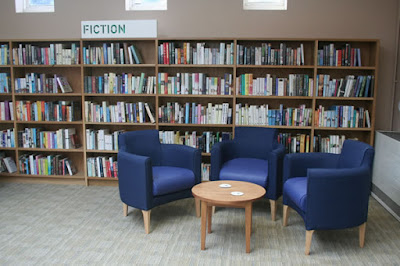 I have already stated in previous posts how valuable I think libraries are. In one of my 'Living in a Bilingual World' columns, I explained the influence they'd exerted over me in certain periods of my life. They still do.

Libraries are not just books warehouses. They are essential to a person's cultural education throughout his or her life. As class-levellers, they help bring down barriers, since anyone can use them. They can also be utilised as mid- and long-term tools to prepare a person for his or her professional future (the nature of which is rather uncertain in the current climate). A child's library card (obtained when he or she is still an infant) is a passport to freedom, a guarantee that they will not be prisoner number 46664 locked away on Ignorance Island.

And now this cultural treasure is under threat. At the time of writing local councils are considering shutting down hundreds of libraries across the country. From North Yorkshire to Fulham the effect of the axe will be heavily felt.

The argument is still the same as it was when Labour was in power: libraries cost too much money to run and their role is no longer crystal clear. The onset of the digital age has dealt a deadly blow to a service whose main remit is still to act as a cornucopia where books, newspapers, magazines and other materials may be read or borrowed. That libraries have actually enhanced their functions to include CDs and DVDs amongst a range of options open to the public has not been factored in. Regarding the financial cost, I could understand it, especially under the present circumstances. But then that argument is turned on its head when you notice that the government lacks the same zeal in pursuing tax-evaders, whose contributions could rake in billions of pounds for our recessionary economy.

One of the ideas bandied about when discussing what to do with local libraries is to use volunteers instead of paid staff. It would be laughable if it wasn't so tragic. Volunteers already do an incredible amount of work in local libraries, so nothing new there. What they can't offer is the know-how that comes with years of training and experience. Somebody ought to take a cup of nice, strong, aromatic coffee to Downing Street to wake David Cameron up. His 'Big Society' dream was already happening whilst he was busy developing his PR portfolio. My local library has always acted as a hub for a wide range of activities: from parents and toddlers groups (my son went to one when he was little) to internet access.

I'll give you an example of how paid staff cannot be disposed of willy-nilly in favour of volunteers. A couple of years ago I decided to write a post about Johann Sebastian Bach. I went online first and after perusing a few websites, I decided on two titles. I contacted my local library and asked them if they had the books I wanted. They didn't, but they could request them from another library, one which wasn't even in my own borough but several miles away. I placed my order and before you could say 'Johann', both books were ready for collection within days of my initial phone call. My experience was, however, far from exceptional, but rather the norm.

Of all the cuts the government has either brought forward or is proposing, this is one of the crueller ones. It strikes at the heart of a person's cultural perspective in life, especially if his or her financial circumstances are below average.

I suggest two ways of counteracting Downing Street's barbarian hordes' attack on our libraries. And both methods are peaceful. In fact they follow in the footsteps of those protesters who decided to make a statement about Tony Blair's biography when it was first published last year. They placed it in the crime section.

One solution I propose is to create mobile libraries on trains and buses, although the latter is more impractical due to there being fewer seats available, especially during rush-hour. There are already mobile libraries in the UK, but they, too, are under threat, especially because in their case fuel is also added to the operating costs. However, what I am proposing is that whenever possible you take a slim volume with you (or a few, depending on what kind of bag you carry around) and leave it/them behind you on the overground/underground. It doesn't matter whether it is fiction, poetry or autobiography, what it's important is the intention. You're leaving it for someone else to read. Be creative, too. How about using a couple of empty seats on the London (Victoria)-to-Brighton service as a bookshelf for your collection, for instance? You could even leave your future customer a little card with it. Then, that person would pass your book(s) onto the next one and so on. You would become the anonymous donor who benefits society as a whole. And with no tax-avoider tag to fear.

My second suggestion is for every person, who has been or will be affected by local councils' plans to close down libraries, to post a book to their local government representative. Inundate your borough's civic centre with tomes by the likes of Tolkien and Alice Walker. Send them with a covering letter, explaining how much these books mean to you. Even better if the volume you're posting was first borrowed from your local library many years before and it made a huge impact on your life then. Dig out that dusted poetry collection by Rabindranath Tagore and leave it at the civic centre's front desk marked 'For the Attention Of the Leader of the Council'. Be bold and send books in other languages, too. After all, recent modern foreign languages GCSE results in the UK still make for grim reading. So, enlist the Sartres and Flauberts (en français), the Goethes and the Brechts (auf Deutsch) and the Lezamas and Dulce Marías (en español) in your crusade. Go the extra step and send a few books to Downing Street, too. Imagine that. A whole country reminding the Prime Minister what his duties to literacy are.

We need a silver-letters revolution. Silver because it's an elegant, distinctive and dignified colour. Just like literature. And my choice of book to send? Antoine de Saint-Exupéry's 'The Little Prince'. It contains one of the more appropriate quotes for the battle ahead: 'It is only with the heart that one can see rightly; what is essential is invisible to the eye.' Is the government's heart malfunctioning to such a great extent that it can no longer see?

Next Post: ‘Sunday Mornings: Coffee, Reflections and Music’, to be published on Sunday 13th February at 10am (GMT)

Photo taken from the London Borough of Hillingdon’s website
Posted by A Cuban In London at 23:59

Labels: A Cuban In London, Cubans in London, library, literature, Of Literature and Other Abstract Thoughts, reading