Living in a Bilingual World (The One About Body Language) 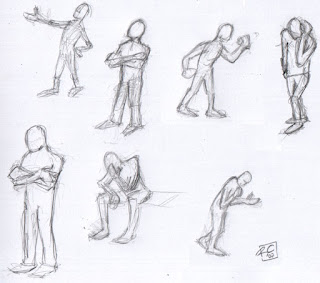 Maybe you belong to the two-fingered peace sign brigade à la Paul McCartney (as long as both forefinger and middle finger are facing out to your adoring audience). Or, perhaps, you're part of the raised-eyebrow Ancelotti's tribe (Chelsea's manager). Or, how about lifting up your left leg at the same time one of your political foes hoists his in the middle of a television debate? That would surely show your supporters your power for 'joined-up' thinking. Alas, it didn't save Gordon Brown's premiership, whose choreographic movement with Lib-Dems leader, Nick Clegg, was caught on camera. The latter still plumped for the Tories when it came to choosing a political dance partner.

But regardless of what your gestures or facial expressions say about your affiliations, one aspect is beyond doubt: like the rest of humankind, you speak 'body language'.

We're capable of learning as many languages as we want to, even if certain aspects of them might fall without our reach (grammar, syntax, pronunciation and so on), but there's a lingo we can always fall back on: the one spoken by our bodies.

Whenever we, humans, are not displaying our natural skills for rhetoric, we tend to replace words with movements. Sometimes we fold our arms in what could be inferred to be a defensive stance. Or we acknowledge the person talking to us with a half-smile. We even do that when said person is boring us to death.

We also use gestures to back up our speech. In this case our verbal arsenal is given a boost by the physical component. Cuba is a good example where this approach has been woven into a nation's identity. Even on radio we gesticulate wildly, and as someone who spent an awful long time promoting dance and art on that medium, I've got enough evidence. I remember a particular DJ who was banned from carrying anything resembling a mug or a glass into the studio. He'd caused many an accident with his body language.

Corporal expression is also a way to convey our inner world to others even when words fail us. I still remember when we came across Stanislavski's 'The Method' at my uni drama group. We all jumped at the chance of finding our inner truth and subjecting ourselves to a process of rigorous self-analysis and reflection. The results were mixed, at least for me. I recall our drama teacher inviting once a famous actor to one of our sessions. We did various exercises and at the end of the rehearsal the guest spoke to each of us, giving us feedback on our pluses and minuses. When my turn came, he asked me quite a lot of questions: Did you mean this when you were acting out this scene? Were you worried when you were carrying out this particular exercise? Was there something on your mind other than the speech you were given when engaging with this other actor? His conclusion was that, although I had natural thespian skills, my face was a kaleidoscope of expressions, many of which were unrelated to the task set by my tutor.

It was a valuable lesson on the importance of our body language. It also brought back some of my more memorable moments in movies; when the protagonist(s) does/do not utter one single word and yet their expressions say more than what you could convey with a thousand words: Glenn Close removing her make-up at the end of 'Dangerous Liaisons' (from 1:34 onwards), Al Pacino squaring up to Kevin Spacey in 'Glengarry Glen Ross' (between 0:47 and 0:59, then, of course, body language goes out of the window and Al goes all 'Carlitos Brigante' on Spacey) and Antoine Doinel in 'Les Quatre Cents Coups' (3:18 to 3:24).

With all this in mind, I have often wondered what response the late John Lennon would have given to his former The Beatles pal, Paul, when the latter suggested some years ago that their collaborations together be named McCartney/Lennon and not the other way around as we had come to know them. Again, body language would have been handy. A two-fingered peace sign would surely have been the reply from the writer of 'Power to the People'. But this time it wouldn't be hard to guess which way the forefinger and middle finger would have been facing.

Next Post: ‘Sunday Mornings: Coffee, Reflections and Music’, to be posted on Sunday 30th January at 10am (GMT)
Posted by A Cuban In London at 23:59