The first seven lines creep up on you like a stalking tiger. They, then, wrap around your legs like an evergreen shrub and climb up your body until they reach your head. Finally, they break in. Chaos is about to ensue.

When/if the times ever comes to decide upon a melody that perfectly captures a lover's feelings of dejection (and rejection) Nick Cave's "There She Goes, My Beautiful World" must be placed either near or at the top

With this post I am not intending to steal Laura Barton's mantle. The author of the 'Hail, Hail, Rock'n'Roll' columns I thoroughly enjoy every fortnight is inimitable. Nick's song, however, deserves to be dissected because it calls to a different part of me. A part you could say that is rooted in the hopeless, hapless romantic fool I have been at times in my life (not for many years, fortunately, I hasten to add). But, say, dear fellow blogger/reader, who hasn't ever penned a love letter after being dumped? 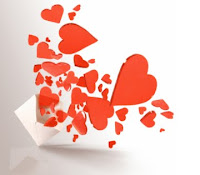 For some reason, I imagine that the Australian singer wrote "There She Goes..." on a piece of paper, longhand, sitting down on a rock, with his right leg crossed over his left one. I can perfectly imagine him drafting up that second stanza: "John Willmot penned his poetry/riddled with the pox/Nabakov wrote on index cards/at a lectern, in his socks..." I love the way he likens the difficult conditions in which these authors wrote their correspondence to his own predicament:"Well, me, I'm lying here, with nothing in my ears/Me, I'm lying here, with nothing in my ears/Me, I'm lying here, for what seems years/I'm just lying on my bed with nothing in my head". He is empty. He has been emptied. By his lover. Can you empathise with him, bloggers/readers? How many times have you sat there, in your lounge, you, forlorn ex-, wanting to write the letter that will wash everything away, that will return your partner to you, and yet, you can't find the words?

The love letter has a long history. Whether written by jilted lovers or hopeful ones, there are so many examples in literature that picking one or two seems unfair on the rest. However who can forget Beethoven's romantic epistle to his 'immortal beloved'?

"Why this profound sorrow, when necessity speaks? Can our love endure without sacrifices, without our demanding everything from one another, can you alter the fact that you are not wholly mine, that I am not wholly yours?"

C'mon, play the 'Moonlight Sonata' whilst you're reading the words above. And then think of all those lovers who've had to face the stark reality: a 'Return to Sender' for their efforts.

But how many can conjure up the spirits of a German philosopher, a French post-impressionist painter, an English poet and a Welsh writer and still make sense of a sung plea to his lover? Or maybe not make sense at all, but at the same time making it? If you know what I mean. Does it make sense? Anyway, Nick pulls it off beautifully:

"Karl Marx squeezed his carbuncles while writing Das Kapital/And Gaugin, he buggered off, man, and went all tropical/While Philip Larkin stuck it out in a library in Hull/And Dylan Thomas died drunk in St. Vincent's hospital"

But if Nick is heart, the piano in 'There She Goes... is soul. Especially as the song reaches its climax. Pity that in the clip below the keyboard is drowned out by the two guitars and bass. In my recording (commonly found on my mp3 player) the frenzy caused by the triumvirate of Cave, lyrics and piano is enough to send me on a sprinting run, especially as I normally listen to this melody whilst out jogging. The irony is that love letters from rejected parties are meant to be calm affairs of the heart. Your passion has been subdued, you can do nothing but give up. Cry your eyes out, drink your blues away, or eat a whole box of bon-bons with your friends. Yet Nick's insistence on becoming one notch up above a doormat borders on the insane: "I will kneel at your feet/I will lie at your door/I will rock you to sleep/I will roll on the floor/And I'll ask for nothing/Nothing in this life/I'll ask for nothing/Give me ever-lasting life"

Valedictory reflection from me today? Sometimes you don't want anyone to know what and how you're feeling. It happened to John Keats. He knew he didn't have much time left in this world on account of his tuberculosis, Yet, that was not deterrent to pen one of the most beautiful love letters ever written, in his case, to Fanny Brawne ("... The last of your kisses was ever the sweetest; the last smile the brightest; the last movement the gracefullest. When you pass'd my window home yesterday, I was fill'd with as much admiration as if I had then seen you for the first time...") The missive remained secret many years after the poet's death. Some other times, though, you want to shout out to the whole world: "I've loved and I've been loved!" Enter Nick again:

Unrequited love has never sounded so passionate, sincere and honest. Thanks, Nick.

Next Post: ‘Sunday Mornings: Coffee, Christmas and New Year Reflections and Music’, to be published on Sunday 19th December at 10am (GMT)

Labels: A Cuban In London, Cubans in London, music, Nick Cave, There She Goes My Beautiful World