Self-deluded, indulgent, (over)exposed, arrogant, "inadequate, pimpled and single" (the last three epithets courtesy of Andrew 'Bah, humbug!' Marr of the BBC). When it comes to describing bloggers, there's no shortage of insults to hurl at us. How unfair. And pathetic.

I joined Blogland in 2007. I'd just had an article published in a national newspaper and realised that I didn't have a platform on which to continue to discuss the issues about which I had written. Since my column had been on dance, it was logical to open a forum about this art form. Thus, I spoke to the designer who'd created my website a couple of years before about opening a space for debate, but she told me that online talkboards, fora and blogs cost money. It was then that I discovered blogger.com.

I'd heard about blogs before but wasn't very sure about what to expect from blogger (in the back of my mind I probably had a similar prejudice to Andrew 'Ebenezer' Marr's about online posters). Since it was a free service, I had nothing to lose and in June 2007 (cue drum roll) 'A Cuban In London' was born. The name was not easy to choose. I first thought of a catchy one like 'Our Cuban In London', echoing Graham Greene's Cold War novel. But it'd been such a long time since I'd read about Wormold and his web of deceit that I gave up on the idea almost immediately. Around that time one of the British television channels showed 'An American In Paris' and I knew there and then that I'd found a good alternative for the name of my little online nook. Still doubts kept creeping in. It's all right if your blog has a generic name (including your real one), or a title that is closely related to the issue(s) about which you write. But when you define yourself by your nationality, gender, or political leaning, you might, unintentionally, be courting controversy. After all, what is a Cuban, besides the obvious answer: a person born in Cuba? And in what way, I thought at the time, would I be contributing to people's notions of what my countrywomen and men were like? Then, there was the most important question: what did it mean to be a Cuban in London?

After some weeks of - aimless - blogging, I realised that really and truly, besides dance, I had a lot of topics to write about, issues that I had not even contemplated addressing before, matters that had last been discussed to the soundtrack of an empty bottle of rum rolling down the floor of a desolate school dormitory in the small hours. I'd acquired some experience writing for the now defunct monthly newspaper "Noticias", a publication aimed at the Latin community in London. I had also written a few music and books reviews for websites. I put those skills into practice. Dance was not the only subject on which I could wax lyrical. Cultural, social and the occasional political post could well be woven into my online threads. I'd finally found my blog's mission statement.

And friends. During the first few weeks my comments section looked as arid as the Sahara Desert, but little by little, fellow bloggers arrived. My compadres and comadres from Cuba and other Ibero-Latin countries were the first ones on board. They were quickly followed by a coterie of US-, and later, UK-based posters, who were sometimes acquainted with Cuban culture. Eventually the list of international contributors to my comments section grew enough to resemble an ad for Benetton, not only due to our ethnic mix, my darlings, but also to our glamour. Credit where credit is due (smiles and flutters Penélope Cruz-style eyelashes). These fellow posters gave me the encouragement I needed to go the extra mile, to make an effort. 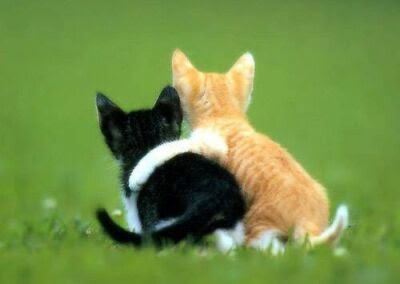 Online friendships work differently from real, physical ones. I think that on that point we all pretty much agree. But our cyber-social interaction needn't be cold and distant. After all, we (I, at least) do spend an awfully long time in front of my PC, reading posts by fellow bloggers, oohing and aahing at their creative output, or at the songs they upload, or at the images they choose to illustrate a particular topic. This exposure to other like-minded folks, even if it was just from the comfort of my computer, led me, shortly after I began my own journey through Blogland, to shed any vestige of prejudice I still had (attention Andrew 'Scrooge' Marr, you'd do well to heed this message).

This is not to say that there are no bloggers for whom my opening words would be a perfect match (thankfully, none belong to this parish). At the last count there were roughly four million blogs in the UK alone. Many times, I've come across websites that are pure vitriol, or are trying to sell something (quick tip, always check your followers' list), or were last updated when Henry VIII was having his little tussle with the Pope. But what I've also realised is that on Blogland, equal attracts equal and after more than three years as a blogger, I count more successes than failures. I especially single out those who've stuck it out with this space for that long.

There're risks, though, in confusing your online life with your real one (if you notice a cautious tone in my words, it is the guarded Scorpio talking). What happens when your fellow bloggers/regular readers unexpectedly disappear? How is one meant to feel when all of a sudden they stop commenting on your posts? Even worse, what about when you pop by a "mutual friend's" blog and you read his/her comments there? Published after your own column went online? How to react? Whereas in real life friendships can either end abruptly (after an awful fall-out, for instance) or peter out slowly, in the wide web world there's no way to arrest the demise of acquaintanceship. All you have is an empty comments box to mull over. Then the questions begin: was it something I wrote? Have I offended him/her? Human emotions on a virtual medium. We homo sapiens surely know how to keep life interesting.

The second risk is the actual, physical disappearance of a fellow blogger, especially someone who has had a big impact on you, be it because of their writing or the thoughtful comments they leave in the feedback section. I still can't get over the death of fellow blogger Renee, who sadly passed away earlier this year. The pain is as palpable as if it had been a friend in real life.

But as I mentioned before the triumphs outnumber the setbacks. In three and a half years as a blogger, these are some of the issues I've discussed and to which I've been introduced, and the writing/photography/art to which I've been exposed:

- Museums I've always wanted to visit and on whose floors, thanks to the existence of blogs, I've left my virtual footprints.
- Musings and observations on the mysteries of life, written with the linguistic flair of an 19th century écrivain.
- Floristry.
- Disability, awareness of it and its effects.
- Books, music and films reviews and recommendations.
- Multilingualism (a topic in which I have a special interest and which never ceases to generate debate).
- Illustrations (and collaborations with caricaturists).
- Travelogues that have taken me from St Kitts to Belgium, from Greenland to Malaysia, from Mexico to Maine. The list is endless, the writing and images are always superb.
- A network of like-minded Cubans, scattered throughout the world, but united by the same desire to be seen as individuals, rather than being defined by a political figure (well past his use-by date, mind you). Incidentally, my blog has just been featured in a book about the Cuban presence in Cyberland called, 'Buena Vista Social Blog'.
- Epic poems whose lessons are still relevant today.
- Discussions about religion and multiculturalism.
- Serious analyses about literature.
- Well-crafted poems, either prompted by a mischievous magpie (isn't that a case of iteration?) or landing on my virtual lap courtesy of a weekly bus.
- Exploration of the subconscious mind through autobiographical writing.
- Cookery columns.

I could carry on forever, but you probably get the gist: like our real human selves in our real human lives, bloggers come in all forms and guises. I consider myself to be one of the luckier ones for having so many online friends with whom I share similar interests. And for that reason, I raise my glass of (insert name of juice here) to you today. As for Andrew 'Fence-sitter-in-chief-at-the-BBC' Marr, well, Andie boy-o, how to put it into words? You know one of those of things that they give you when you're born, it starts with 'l', it has four letters, ends in 'e', you give it back when you die, and it has a lot of stuff happening in the middle? Well, get one, mate. In the meantime allow me to praise my 'bredrin' and 'sistas' from Blogland. May you all have a Merry Christmas and a Happy New Year!

Next Post: 'Sunday Mornings: Coffee, Reflections and Music', to be published on Sunday 9th January at 10am (GMT)

Labels: A Cuban In London, Cubans in London, Fatboy Slim, music, Praise You