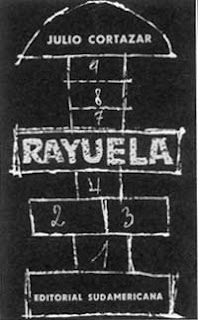 'Quizás vivir absurdamente para acabar con el absurdo, tirarse en si mismo con tal violencia que el salto acabara en los brazos de otro.' ('Maybe the answer is to live absurdly to do away with the absurd, to leap into oneself so violently that the leap will end up in another person's arms')

It would be fair to say that the essence of 'Rayuela

') lies in the above sentence. Published in 1963, Julio Cortázar's second novel (he'd already had an earlier stab at the longer narrative with 'Los Premios', ['The Awards'], published in 1960) displays the innovative techniques that swept through the world of Hispanic literature at the end of the 1950s and beginning of the next decade. This is the time of Cabrera Infante's 'Tres Tristes Tigres

'). With its convoluted plot and avantgarde approach 'Rayuela' soon joined the ranks of the aforementioned classics.

And at the centre of its success, both critical and commercial, is the author's intent on building up on the vast Hispanoamerican cultural canon and his idea of using creative fantasy, not as a challenge to realism, but as an alternative. It is the reason why I chose that quote to open my review.

The first element that greets the reader who comes to 'Rayuela' for the first time is that it belongs to that clutch of novels that are much talked about and whose significance much highlighted, yet a full explanation of the plot is hardly ever forthcoming. In this category we find 'Ulysses

' by Proust and 'Paradiso

' by Lezama Lima. To avoid making the same mistake, let me break down the storyline from the outset. 'Rayuela' is a love tale.

Horacio Oliveira is an Argentinian based in Paris. There he meets 'La Maga', an Uruguayan expat who has a young child, Rocamadour. They start an on-off relationship which ends with Rocamadour's death (a masterclass on writing's "show, don't tell" golden rule). 'La Maga' allegedly returns to Uruguay (we only have Gregorovius's word for it) and Horacio goes back to Argentina where an old girlfriend of his, Gekrepten, is still waiting for him. In reality he begins to hang out with his childhood friend Traveler and his wife, Talita. In the latter he sees a reincarnation of 'La Maga' and this vision triggers off an emotional crisis.

That, in a nutshell, is 'Rayuela'. But of course there's a lot more. And this is the second element that surprises the reader.

First off, there's the structure. You can digest 'Rayuela' as a normal book from Chapter 1 to Chapter 56 and then read the 'alternative' chapters - called 'prescindibles' in Spanish - (from 57 to 155). In fact my copy has the order the reader ought to follow if they choose that option. At the end of each part and in brackets there's the chapter number that should come after, for instance after the second chapter comes the one-hundred sixteenth). Or you could ignore the alternative parts and just close the book after finishing Chapter 56. In which case you will be missing out on a huge chunk of metaphysical and surrealist analysis, part of what makes 'Rayuela' a classic.

Secondly, there're the levels at which this novel works. 'Rayuela' is a reflection on the contemporary literature of its time (specifically from the 1940s to the 1960s, although it's still relevant today) and the embodiment of such analysis. To achieve this, Cortázar uses Oliveira's inner voice as well as the investigations of one Dr Morelli, a philosopher with whom Horacio and his friends are obsessed. The author is also far from interested in catering to that archetypical reader whose sole purpose is to find out what's going to happen at the end of the book. To him this type of passiveness is damaging to literature. This is the reason why many people consider 'Rayuela' a strenuous read. I found it seducing, dramatic, deep and cheeky in equal measure. At no time did I feel patronised or mocked. And humour plays a fundamental part in keeping the reader hooked.

The 'alternative' chapters, the philosophical musings (the 'ergo' from the phrase 'cogito ergo sum' has lost its meaning, Chapter 2), the 'gíglico' language (Chapter 68), the intentional misspelling of words with 'h' in Spanish (it's a mute consonant, Chapter 69) and the appearance of the same letter in words where it doesn't belong (Chapter 19) all show a writer displaying a high degree of facetiousness. Cortázar himself said once that without the humour 'this book would probably be unbearable, as it's the case with many Latin American novels that shipwreck in themselves, crushed and destroyed by earnestness. I don't even want to think of the passengers on board.'

Finally, along with the humour in the novel, there's another element that makes 'Rayuela' a compelling read: the music. And specifically jazz. Whilst in Paris, Horacio is part of a gang, broadly speaking, who call themselves The Club. They spend most of their time discussing philosophy, literature and music. Jazz becomes their elixir of life. Records are played and changed, strong opinions are voiced (Dizzy Gillespie, for instance, is rubbish, Bessie Smith is superb). At times the novel's pace feels like a piece by Dave Brubeck: meditative and with a syncopated beat. Some other times, the mood is more Ornette Colman: free, improvised and unshackled. Precisely the combination I look for in a novel that comes preceded by so much fanfare.

Must some books be written? Apparently for Julio Cortázar the answer seemed to be yes. In an old interview he said that 'if I hadn't written "Rayuela", I would have thrown myself in the Seine'. Fortunately for us, instead of jumping into the famous French river he leaped into himself and as a result we got a classic.

Next Post: 'Sunday Mornings: Coffee, Reflections and Music', to be published on Sunday 16th May at 10am (GMT)
Posted by A Cuban In London at 23:59