What Makes a Good Writer? By Zadie Smith (1st Part)

Starting today and for the next fourteen weeks, every Tuesday until 15th December, I will be reproducing an essay written by the British author Zadie Smith for The Guardian's Saturday Review section which was first published on 13th January, 2007. Zadie has penned three novels: 'White Teeth' (turned into a successful television series), 'The Autograph Man' (my favourite book by her so far) and 'On Beauty' (her most accomplished work, according to critics, I loved it). 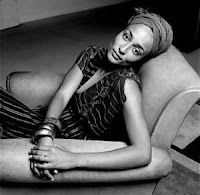 She currently divides her time between the London's Institute of Contemporary Arts where she is a writer-in-residence and Harvard where she is furthering her studies.

I would also like to thank, once again, Ginny Hooker from the Saturday Review team for allowing me to post this thought-provoking article. You're great, Ginny, and just in case I did not make it clear in my e-mail, you deserve a payrise.

There are three reasons why I am publishing this essay now: the first one being that literature has become an intrinsic part of this blog. I review books on a professional level and share a passion for both fiction and non-fiction works with other bloggers. The second reason is that some of the people who visit my blog are writers themselves, the majority of them published authors. I believe that Zadie's musings on the art of writing will generate a healthy debate amongst my readership. The third and last reason is that I have always been attracted to writing's 'how'. The genesis of the project, the development, en bref, the process.

I am lucky to count amongst my acquaintances a Cuban cartoonist like Garrincha. He has very kindly provided the illustrations that go with each post gratis. We had already partnered up before for my 'Living In A Bilingual World' columns and I am happy to say that one of his images has ended up in a book about multilingualism. Although his blog is mostly in Spanish, his humour is universal and therefore not hard to understand. Needless to say he is available for commissions and even has his own online shop (you can visit it here). Garrincha's motto is 'Cartoonist to the End' and it is this conviction plus his quality as an illustrator that led me to ask him to complement the stimulating series to which you are about to be introduced. Please, be aware that the reproduction of images and text is absolutely forbidden and permission must be sought first before copying the content included herein and pasting it somewhere else. Without any further ado, here is the first installment of 'What Makes a Good Writer?'

The tale of Clive

I want you to think of a young man called Clive. Clive is on a familiar literary mission: he wants to write the perfect novel. Clive has a lot going for him: he's intelligent and well read he's made a study of contemporary fiction and can see clearly where his peers have gone wrong. He has read a good deal of rigorous literary theory - those elegant blueprints for novels not yet built - and is now ready to build his own unparalleled house of words. Maybe Clive even teaches novels, takes them apart and puts them back together. If writing is a craft, he has all the skills, every tool. Clive is ready. He clears out the spare room in his flat, invests in an ergonomic chair, and sits down in front of the blank possibility of the Microsoft Word program. Hovering above his desktop he sees the perfect outline of his platonic novel - all he need do is drag it from the ether into the real. He's excited. He begins.

Fast-forward three years. Somehow, despite all Clive's best efforts, the novel he has pulled into existence is not the perfect novel that floated so tantalisingly above his computer. It is, rather, a poor simulacrum, a shadow of a shadow. In the transition from the dream to the real it has shed its aura of perfection its shape is warped, unrecognisable. Something got in the way, something almost impossible to articulate. For example, when it came to fashioning the character of the corrupt Hispanic government economist, Maria Gómez, who is so vital to Clive's central theme of corruption within American identity politics, he found he needed something more than simply "the right words" or "knowledge about economists". Maria Gómez effectively proves his point about the deflated American dream, but in other, ineffable, ways she seems not quite to convince as he'd hoped. He found it hard to get into her silk blouse, her pencil skirt - even harder to get under her skin. And then, later, trying to describe her marriage, he discovered that he wanted to write cleverly and aphoristically about "Marriage" with a capital M far more than he wanted to describe Maria's particular marriage, which, thinking of his own marriage, seemed suddenly a monumentally complex task, particularly if his own wife, Karina, was going to read it. And there are a million other little examples . . . flaws that are not simply flaws of language or design, but rather flaws of . . . what? Him? This thought bothers him for a moment. And then another, far darker thought comes. Is it possible that if he were only the reader, and not the
writer, of this novel, he would think it a failure? 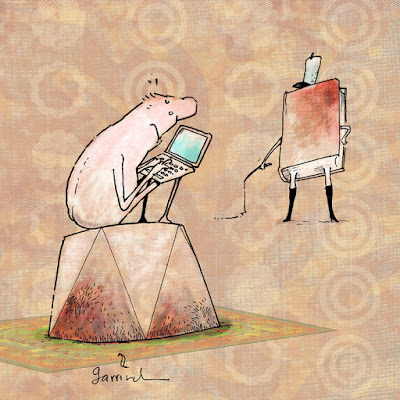 Clive doesn't wallow in such thoughts for long. His book gets an agent, his agent gets a publisher, his novel goes out into the world. It is well received. It turns out that Clive's book smells like literature and looks like literature and maybe even, intermittently, feels like literature, and after a while Clive himself has almost forgotten that strange feeling of untruth, of self-betrayal, that his novel first roused in him. He becomes not only a fan of his own novel, but its great defender. If a critic points out an overindulgence here, a purple passage there, well, then Clive explains this is simply what he intended. It was all to achieve a certain effect. In fact, Clive doesn't mind such criticism: nit-picking of this kind feels superficial compared to the bleak sense he first had that his novel was not only not good, but not true . No one is accusing him of so large a crime. The critics, when they criticise, speak of the paintwork and brickwork of the novel, a bad metaphor, a tedious denouement, and are confident he will fix these little mistakes next time round. As for Maria Gomez, everybody agrees that she is just as you'd imagine a corrupt Hispanic government economist in a pencil skirt to be. Clive is satisfied and vindicated. He begins work on a sequel.

Next Post: 'A Cuban In Cantabria, Spain (Photography)', to be published on Thursday 10th September at 11:59pm (GMT)