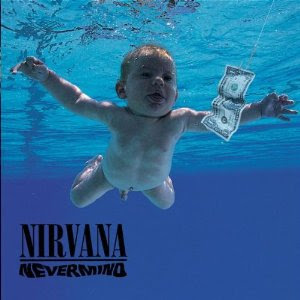 In 1991 Seattle conquered the world.

As statements go, they don't get more opinionated and boisterous than the one above. But Killer Opening Songs has a big mouth. Oh yes! And K.O.S. will demonstrate immediately why the caption decorating the top of this post is not just a display of cheap bravado.

By the time Nirvana broke into the pop charts with their sophomore album, 'Nevermind', the musical scene had totally changed. Glam metal was in freefall with bands like Def Leppard and Mötley Crüe almost collecting their pensions whereas rap was becoming comercially successful with the likes of A Tribe Called Quest and De La Soul releasing ground-breaking records. This was also the year when Freddie Mercury, Queen's erstwhile singer, died of AIDS, prompting 'Bohemian Rhapsody' to top the charts once again sixteen years after its first release. It was this musical vacuum that grunge stepped into, turning Seattle into the hotbed of alternative rock'n'roll. And the song responsible for that? 'Smells Like Teen Spirit'.

However, it would be totally irresponsible and unfair to claim that Nirvana invented grunge. This particular musical style had been doing the rounds since the mid 80s in the USA, a spin-off of hardcore punk and heavy metal. What happpened in the early 90s was that grunge stripped down its image and bared its teeth. Out went the big perms from the eighties, in came shorter hair, checked shirts and baggy trousers. Instead of the usual 30-second guitar solo so typical of bands like Poison and Whitesnake, bands like Pearl Jam and Alice in Chains went for a sludgier and more distortioned guitar sound. The lyrics got angrier and so did the feelings expressed by what then began to be known as 'Generation X'.

On the other hand, though, it would not be too far-fetched for K.O.S. to claim that 'Smells Like Teen Spirit' opened the floodgates of the grunge movement and brought it into the mainstream. DGC Records was hoping to shift a maximum 250 000 units of 'Nevermind'. In the event, the album was selling 400 000 copies a week in the US by Christmas 1991.

The song, as such, has become an anthem for young people around the world who feel disenfranchised, alienated and confined. From the iconic intro, the main feature why Killer Opening Songs has always regarded it so highly, to the guitar solo, which, in a blatant break from convention replicated the lyrics verbatim, only instrumentally, this is the track that encapsulated the movement's ethos.

'Smells Like Teen Spirit' has been covered by many artists over the years, Tori Amos and Patti Smith are but two of them. Without wanting to come across too snobbish, K.O.S. has not been always happy with the outcome. This is an angry song by and for an angry generation and the stripped down, acoustic versions that abound sap the energy that is so ubiquitous in the original piece. Only Kelis, in K.O.S.' humble opinion did it justice a few years ago when she played the Glastonbury Festival.

So, another week, another Killer Opening Song. Enjoy.