Brompton Cemetery and Kensal Green: flipsides of a royal coin 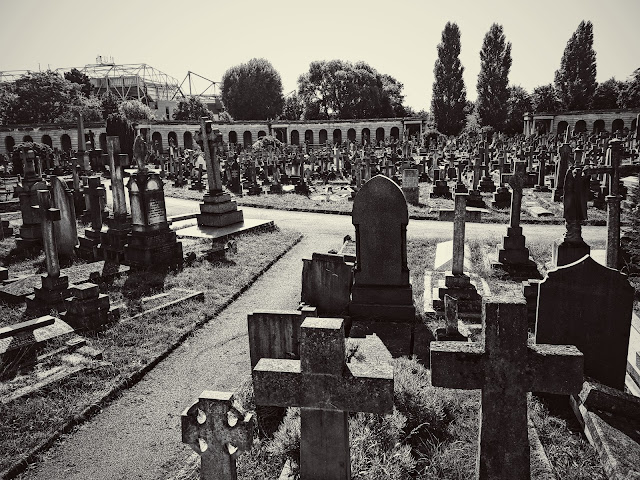 London works in mysterious ways. How many times have I cycled or walked on Fulham Road? Usually on my way to or from Stamford Bridge (never to a game, though. Can’t afford the ticket prices. But I’ve been to a couple of events there and, of course, to the shop).

What I’d never realised was that one of London’s Magnificent Seven was right next door to the Bridge. Many years ago, I stopped at the entrance to the cemetery on the Fulham Road side to fix something on my bicycle (you can also access the graveyard from Old Brompton Road).

What first catches the visitor’s eye is the layout. A road called Central Avenue threads its way southwards straight past regularly spaced colonnades and the Great Circle until it reaches the chapel.

The affluence of the neighbourhood Brompton Cemetery sits in is reflected in the many notable people buried here. From women’s suffrage movement leading activist Emmeline Pankhurst, to the “Lady Gaga” of the 1920s, Marchesa Luisa Casati, you’ll find plenty of several famous residents here.

Brompton Cemetery is also an architect’s dream of a place. Or that of a student of architecture. Or even an art student’s. Today I spot a couple of people sketching the columns in the Great Circle.

The café is a welcome stop. I’m in need of a sugar boost. What with this September day being hotter than your average August one. A warm, but much-needed breeze caresses my face as I rest my bones for a few minutes before saddling up and carrying on to my next stop: Kensal Green.

I come out directly onto Kempsford Gardens, turn left onto Warwick Road and ride all the way up, Ladbroke Grove-bound.

As a city, London has a peculiarity that I feel puts it in a category of its own. However, my lack of world-travelling experience stops me from making conclusive, conversation-ending comments. For instance, I’m unable to make comparisons with any other major metropolis, where perhaps, a similar situation plays out.

In the British capital it’s not uncommon to find social housing estates (or council estates) within spitting distance of well-off areas. I lived in Edmonton, Enfield, north London, for many years. The area had (still has) a reputation for being rough. Yet, it was within walking distance of Winchmore Hill and Bush Hill Park, two neighbourhoods that could comfortably be labelled as middle-class.

The Royal Borough of South Kensington and Chelsea is different. There is a stark contrast between the moneyed southern part (mostly hundred-thousand-pound houses and million-quid mansions) and its multicultural, migrant-heavy northern counterpart. A bicycle journey between two of London’s Magnificent Seven, Brompton Cemetery and Kensal Green, is evidence of this.

As soon as you turn left from Holland Park Avenue onto Ladbroke Grove, the scenery changes. What were tree-lined streets before becomes a compact mass of people walking up and down the busy roads. It doesn’t help that this next stage of my tour coincides with school pick-up time. Throngs of children and their parents/carers mill about. Either waiting for lights to change or for buses to arrive.

Ladbroke Grove’s tarmacked surface carries a painful reminder for me. It was on this road that I pushed my bicycle down to the site of Grenfell, where a fire had broken out on Wednesday 14th June, 2017, in the early hours of the morning. A few days after, Saturday 17th June, I pedalled down the Regent’s Canal towards Notting Hill. I wanted to help out. I wanted to show the survivors that they mattered, that this part of London mattered. That they were in our thoughts and hearts. That like many of them, many of those who died, this immigrant could have faced a similar fate (I, too, used to live in a high-rise).

Pedalling up Ladbroke Grove today, I recall a few lines from a poem written by the Vicar of St Clement Church, Alan Everett, for the victims of the fire:

Forced to watch
Lights at the windows
Torches
Of those who were still alive
For the time being
Signalling
Desperate faint hope
Until floor by floor
The darkness snuffed them out. 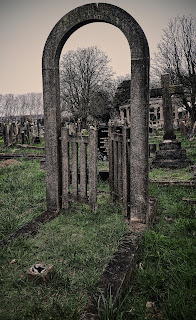 The oldest of London’s Magnificent Seven, Kensal Green is also the city’s oldest commercial cemetery. For birdwatchers, the graveyard is heaven on earth. It was declared a conservation area in 1984 and boasts rare flora and fauna.

With seventy-two acres covering the area between the Grand Union Canal and Harrow Road, this is a place worth more than a visit. I’ve already been twice and it’s likely I’ll come again.

153 monuments are included in the National Heritage List for England at Grade II* or Grade I. No wonder Kensal Green has a lot to shout about. Some of those buried here include novelist Anthony Trollope, Lord Byron’s wife and the engineer Isambard Kingdom Brunel.

With only an hour to spare, I get back on my bicycle and head for my final destination: Highgate Cemetery. Sadly, I get there at quarter to five and last admission is at half four.

Of London’s Magnificent Seven, Highgate is the only I’ve never visited. There are two sides (although if you’re only interested in paying your respects to Karl Marx’s grave, it’s the East Cemetery you need to go to). There’s an entrance charge, which is eight pounds fifty if you only want to visit the East Cemetery and a tenner if you want to include the architecture-rich west side, too.

I get back on my two-wheeler and make my way back to Abney Park, where this tour started. Hard to believe that the sun is still shining brightly and that the hoodie I brought with me (you can never be too sure when it comes to the highly unpredictable London weather) stayed in my pannier. As I cycle down Stoke Newington Church Street, I’m already thinking of my next adventure. By bicycle, of course.