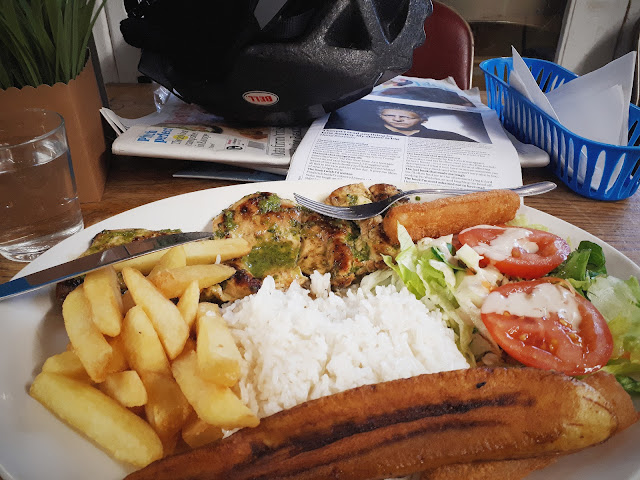 Colombia may have gone out to England’s Eric Dier’s game-winning penalty in last year’s World Cup, but luckily, that temporary setback never affected its well-known cuisine. El Parador Rojo in Seven Sisters, Tottenham, is evidence of this.

Meals on (Two) Wheels has been to this restaurant a few times and it rocked up there again recently, gobbling down an overflowing plate of chicken, rice, chips, salad and beans (yes, cycling does make one hungry and the staff are familiar with our regular cycling-themed section, so the portions are usually generous).

What makes this establishment stand out in an area choc-a with international bars, cafes and restaurants is its atmosphere. El Parador Rojo is that very modern London combination of good music-filled atmosphere (no muzak here, thank you very much, just, mainly, Colombian salsa, as heart-warming as the food being served), clientele and staff. The restaurant sits on a popular corner, Seven Sisters Road and Tottenham High Road and it is well served by the Underground (Victoria Line), rail (all trains go to London Liverpool Street or Enfield/Cheshunt in the opposite direction) and an efficient bus network.

Cyclingwise (after all this section is bicycle-related), getting to El Parador Rojo is easy. This part of South Tottenham is almost incline-free and bicycle racks are dotted about. It is also part of the CS1 (Cycle Superhighway 1) and therefore full of quiet roads nearby on which to ride your two-wheeler undisturbed. Should you resume your travel eastwards, you will have Stamford Hill to contend with but that’s a small hurdle. The slope is easy to overcome and after that you have the flatter-than-flat space of east London under your feet (or wheels, rather). To the north lies Enfield and as long as you stick to the high road, including Fore Street and Hertford Road you will have a smooth journey to the sticks. 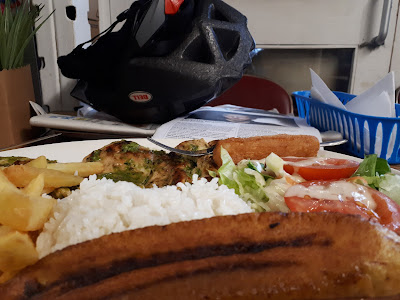 If you do encounter any hills or elevations, you can rely on the food you consume to take care of that. Whether we’re talking buñuelos (fried dough balls) or empanadas (pasties), you’re spoiled for choice at EL Parador Rojo. When Meals on (Two) Wheels last visited it found its chicken to be well-cooked, with the skin on and slightly crispy. The rice was loose and soft, just the way it should be. MoTW added a ration of plantains half way through its meal. They had a tempting, light-syrupy colour. The beans were tender.

After scraping the last bits off its plate, Meals on (Two) Wheels got back on its bike and as it cycled away, belly full and energized and with the echo of another salsa song in its ears, it thought: Now, where were we regarding hills?