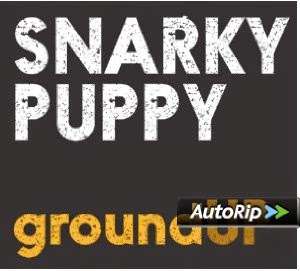 Is it funk, is it fusion, is it electronica, is it avant-garde, is it Latin, is it mellow, is it trad, is it experimental? What is it?
It’s jazz.
Moreover, it’s Snarky Puppy’s jazz and it is “the shape of jazz to come”, to quote Ornette Coleman.
Sometimes Killer Opening Songs makes his musical discoveries on his doorstep, as in when he picks up long-awaited CDs shoved through his letterbox, ordered from evil, tax-avoiding Amazon. But occasionally, K.O.S. travels far to dig out new melodies. Far as in going all the way to Glynde Place, near Brighton, in southeastern England, to the Jazz FM-sponsored Love Supreme festival.
Forget the hellish journey back home (more than three and a half hours on the road late at night, including a diversion that added an extra hour to the already long drive), the memories of Snarky Puppy’s performance more than made up for any inconvenience suffered. This US band that sprang into the jazz scene in 2004, has been making a lot of noise in the right way ever since, and they have the rich, eclectic and mind-blowing musical output to back up the buzz they have generated.
The driving force behind Snarky Puppy is bassist and composer Michael League, yet, it would be wrong to leave out the other band members. Drummer Robert “Sput” Searight, who has collaborated with the likes of Snoop Dogg and London-based Bill Laurance, who has just released a well-received debut album, Flint, are just some of the stars to be found in this combo.
Killer Opening Song Thing of Gold appears on Snarky Puppy’s 2012 record groundUP, a combined CD and DVD offer. The track showcases everything that makes this band the future of jazz to come. Beautiful piano and saxo join forces together at the beginning of the song to weave a spellbinding tapestry of rhythm patterns. Strings kick in shortly after and add gravitas to what is already a mesmerising piece of music. The coup de grâce is provided by Texas-born keyboardist Shaun Martin who leads the whole ensemble to a hymn-like finale.
Music like this is a joy to listen to. Watching the members of Snarky Puppy perform live at Love Supreme was equally a pleasure to see. And at the centre of it all lies the key: the Killer Opening Song.
© 2014
Next Post: “Sunday Mornings: Coffee, Reflections and Music”, to be published on Sunday 13th July at 10am (GMT)