Rain. It is the same everywhere, isn’t it? Madrid, Sâo Paulo, Kuala Lumpur, Tokyo, Johannesburg. No matter what your surroundings look like, what the geometry of your town, village or city is, or the size of the buildings that populate the main avenue, rain remains unchanged.

Not wrong from an objective point of view. The same condensation process takes place all over the world. The same aqueous vapour that forms in the atmosphere before plummeting to earth in the shape of fat drops occurs in all the aforementioned cities. But it’s the subjective, the unbidden subjective interpretation of rain that renders this phenomenon distinctive.

A few hours ago (on the day of writing this post) I went out for a run. It had been more than a month since I last had jogged. The storms sweeping across the UK put paid to any notion I might have had of nipping out for my usual seven-mile run. But today we had a glorious afternoon in London and I felt like doing my longer circuit; ten miles and sixty yards in total.

Halfway through my run the skies opened. To my amazement, to the west the sun still shone brilliantly, whereas to the east (where I was headed) the rain was coming down hard with a vengeance. I could have done a left turn there and then and headed back home. It was still a bit of a jog, about a mile and a bit, but at least I knew I would be dry in minutes as opposed to getting soaked to the skin.

I got soaked to the skin. I carried on running, not only out of enjoyment (I was going at a good, steady pace and the music pumping into my ears was the right one) but also out of the magic this unpredicted rain produced out of its wet sleeve. Sorry, London, the Southeast and Britain: this rain was not British. 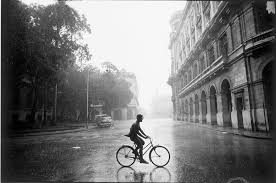 This rain was Cuban, or at least tropical.

This was not the rain that has kept pumps working overtime in the last three or four months, the kind that has left cars stranded and made people mutter under their breath: “Oh, bloody 'ell, not again!”. No, this was rain in Technicolor, throwing shapes around as if one were on an LSD trip (which I have never undertaken, mind).

The rain in which I got caught a few hours ago was not cold (we had 14 degrees in London today for the first time in ages, unusual for February). This rain had a warm muzzle with which it poked me gently on my ribs. This rain had “home” written all over the sleeveless T-shirt it was wearing.

What I saw in this downpour was my birth city in my adopted one. Home in home. As I pounded the pavement the scenery around me changed and a sense of randomness took over. Like a film set where leading and supporting actors, extras, the crew and the director mill about and move aimlessly in between shots, the objects and people around me as I ran looked as if they had been scooped up by a giant hand and thrown back down like pick-up sticks. In my delirium (what else to call it?) I heard glasses half-filled with Havana Club cincoañejo rum (the better one) clinking and dominoes being shuffled. I saw a postman stopping right under a balcony and screaming out: “¡Carmencita, telegramaaaaaaaaaaa!”, raindrops falling off his moustache. A couple of children, feet swimming in their oversized shoes, approached me and asked me: “Mi tío, can you get us the ball that went over the fence, please?” The bluesy, funky music on my mp3 player was replaced by the sound of conga drums, hand-clapping and a Spanish guitar. This was not London's February winter rain, but Havana's May’s first spring shower, the one you allow yourself to get caught in because it brings you good luck. The one where the sky parts in two; one side sunny, the other one rainy. I was soaked in the rain; I also was soaked in voices, sounds, rhythms and pregones.

I ended my run an hour and thirty-five minutes later. By then it was letting up. A slight drizzle saw me to my front door. To the west the sun was still shining. Sorry, London, the Southeast and Britain, the rain that had just assaulted my senses was not British. I had just had a Havana moment. Or at least a tropical one.

Next Post: “Pieces of Me, Pieces of Havana”, to be published on Wednesday 5th March at 11:59pm (GMT)