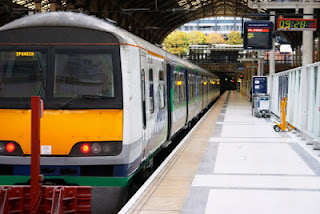 16:40. I’ve got five more minutes to catch the 16:45 overground train from Liverpool Street to Enfield Town departing from platform 4. My pace quickens. I “Oyster” myself through the ticket barrier along with the rest of the rush hour pack. The eight-carriage metallic Monstro swallows us all, willing Pinocchios; some going back home from work, others, visiting friends in the sticks.


My seat faces west. In front of me a couple. They giggle constantly, in a world of their own. To my right a besuited businessman. He holds a tall latte from Starbucks and listens to some music on his iPod? iPhone? Smartphone? Hard to tell from where I am sitting. But that the gadget he is holding in his hand is a sophisticated one, I have no doubt. Behind him another couple. They silently look outside the window at the impromptu-Usain Bolt-copycats, making a mad dash for the closing doors. Everyone’s clothes are a statement of the change of season: bright pinks with reds mix with beige wool coats. Purple polo necks pair up with grey skirts. Some, like me, remain monochromatic; I am part of the sea of blacks, dark greys and navy blues that sweeps through my carriage, like a challenge to the light brown and off-whites sported by those more attuned to nature’s current colours. London’s urban landscape has just got classier and trendier.


The doors shut. There’s a two-second silence in which you can almost hear everyone’s breathing. Especially that of the late arrivals; gasping for air, taking off their scarves and opening the top buttons of their jackets. Suddenly through the tannoy a voice announces that “this is the 16:45 train Liverpool Street to Enfield Town stopping at…”


Ahhh… I wonder,what if it were a different announcement? What if it said: “This is the 16:45 train Liverpool Street to Enfield Town stopping at…”


Bethnal Green, formerly part of rural Middlesex and now multicultural hub. Sliced up by the new railways in the 1800s and key player in the East End’s lore.


The dying sunlight steals through the windows of my carriage as the train moves past tower blocks, factories and London Fields. Again, the imaginary voice comes on the PA system:


We have now arrived at Hackney Downs in the borough of Hackney, a part of London that has gone from no-go area to gentrified hipster’s paradise in the blink of an eye. Excellent traditional, alternative and international cuisine can be found here as well.


The train snakes further up north and east until it comes to a halt. This time the greeting from the voice is different:


Shalom, passengers, you are now at Stamford Hill station. This area is renowned for its Orthodox Jewish population. On Saturday mornings yarmulkes mingle with tichels, and black is the colour to be seen in on the high road.


On the train rambles and at almost exactly 17:03 a sharp bend announces the next stop. I peer down as the train crosses a bridge beneath which lie dozens of shops run by Ghanaians, Turks and Jamaicans. Seven Sisters station needs no introduction. It can do so itself:


I’ve got a big Colombian community who love hanging out outside El Parador Rojo restaurant on Saturday night; reggae, soul and funk music fans checking rarities at Every Bodies Music just up the road; the warm and welcoming Marcus Garvey library within spitting distance and the Bernie Grant Arts Centre dedicated to the memory of one of only three black MPs to be elected to Parliament in 1987.


At 17:11 we arrive at Edmonton Green station. This time it’s poetry that takes our hand and invites us to get off the train. John Keat’s Draught of Sunshine is becoming weaker and weaker as twilight begins to envelop us. The imaginary voice on the tannoy informs us that…


As soon as you come out of the station, you need to turn left onto Church Street. Walk up the road for about five minutes and you’ll see the house on your right handside. Venture in and a blue plaque will tell you that “On this site formerly stood the cottage in which the poet John Keats served his apprenticeship (1811-1815) to Thomas Hammond, a surgeon of this parish."


The train reaches its final destination: Enfield Town. The early evening hustle-bustle contrasts sharply with the notion that this is a sleepy suburb in north London. The last announcement comes on:


This train will now terminate at Enfield Town station belonging to the borough of the same name. The area has one of the oldest, if not the oldest, markets in England, established by Royal Charter in 1618. Catch the 191 outside the station and get off at Forty Hall and you’ll be able to see the remains of Henry VIII’s Elsyng Palace, a hunter lodge also used by Elizabeth I. I hope you have enjoyed your journey.


Indeed, I have. I hope you have, too, reader, for this is part of my urban landscape. What makes London my London.


Next Post: “Sunday Mornings: Coffee, Reflections and Music”, to be published on Sunday 11th November at 10am (GMT)
Posted by A Cuban In London at 23:59