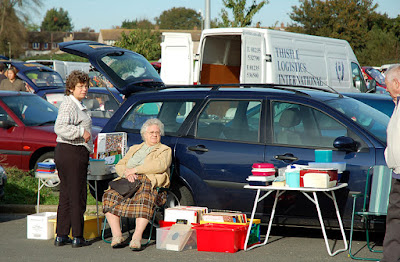 ... car boot sales. Those typically British outdoor markets - especially during spring and summer - where all kind of paraphernalia are put up for sale.

The main objective of a car boot sale ("trunk" in the States) is to get rid of unwanted items, whether they be bric-à-brac or gardening equipment. There's however another unintentional motive.

Car boot sales are the perfect introduction for children to the workings of modern capitalism.

Professional traders selling their cheaply-produced wares at cut-off prices, domestic surplus on display and never-ending haggling; all these elements are the sine qua non of modern capitalism. And children, especially younger ones, lap it up in the same way some people dream of becoming the next Bill Gates.

In preparation for our first car boot sale, my children and my wife divided and labelled the various items that would be put up for sale and worked out how much to charge per unit. There were a few heart-rending moments as toys that had, not so long ago, filled up my children's playtime, were put in the pile. But this was no time for cheesy, Kate Winslet "gather, gather" sentimental moments. There was a trip to Cornwall looming ahead and if my son and daughter wanted to have money to spend, then, they would have to sacrifice some of their precious childhood keepsakes.

As soon as we arrived at the pitch (twelve quid for sale and parking space, not bad, really), we all threw ourselves into action. The merchandise was strategically placed. A bicyle that had seen better days was one of the two items that we were desperate to get rid of. The other one was a tent that had been blown over the fence into our garden and had not been claimed by anyone. In between them both we scattered dinosaurs, small cars, prams, dolls and books. We were ready. Are you watching Greece? This is how you run a business. Default was never a part of our vocabulary that day.

Yet, one issue with which you have to contend at a car boot sale is that everyone has the same idea. After all, we're all there, not just to sell, but also to return home with fewer items than we left. And if we have to start yelling at the top of our lungs, like traders in the City and Wall Street, to attract attention, we'll do it.

Out of my two children, I now know who will be the hedge fund manager. My daughter went from a passive, almost angelic state of on-the-spot salesperson to a hands-on CEO using sophisticated market strategies to generate returns higher than traditional stock and bond investments. She left our pitch and wandered around the cordoned-off field bartering goods, cajoling customers and driving hard bargains. My son, in the meantime, got fed up after a while and sneaked into our car to read his book. He will be the chairman. And when the going gets tough he will probably blame the minions who work on the sales floor.

In my case, I took a closer look at what people were selling. It's not too far-fetched to suggest that a car boot sale is almost a peek into someone's front room. Volumes by Dean Koontz, Danielle Steel and Lynda La Plante were ubiquitous. CDs by the likes of Macy Gray (On How Life Is), Michael Buble, the Spice Girls, Westlife and Will Young convinced me once more that in the UK a lot of people live their lives in the middle of the road, with no fear of ever getting run over. Occasionally a stall would stand out, either by displaying left-of-field music by bands such as Placebo or Garage (I bought their debut album) or books by Ian Mc Ewan and Mark Haddon. But on the whole I was witnessing mass consumerism in a large scale. The result of spur-of-the-moment purchases, which later end up in the scrapheap. Or in a car boot sale. This is what capitalism is about. Buying what you neither need nor - sometimes - really want, yet makes you feel better, because the act of buying - and having - is stronger than the act of saying, no, I don't need it.

However, a car boot sale is a great way of fostering a spirit of enterprise and adventure in the younger generation. After all, if they're careful enough with the merchandise they're selling, including pricing, they're more likely to think in real money terms as opposed to inflated notions of investment. And after what happened three years ago (Lehman, RBS and Northern Rock, I'm talking to you), that can only be a good lesson to learn.

Next Post: “Sunday Mornings: Coffee, Reflections and Music”, to be published on Sunday 2nd October at 10am (GMT)
Posted by A Cuban In London at 23:59

Labels: A Cuban In London, Cubans in London, Let's Talk About