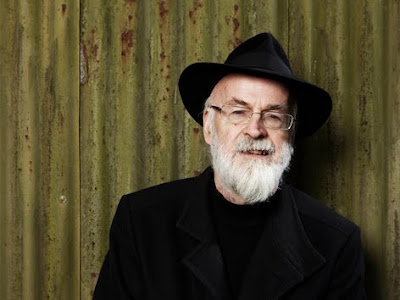 In Terry Pratchett's recent documentary 'Choosing to Die' the author says at the very beginning: "Sometimes, particularly when I'm depressed, I dread what the future may hold. And it's occurred to me that in these modern times one shouldn't have to fear that sort of thing." Terry suffers from Alzheimer's, a condition characterised by memory lapses, confusion and emotional instability. The process is irreversible and the result is loss of one's mental abilities. In our 21st century, as Sir Pratchett avers, we should be able to deal with this kind of malaise. I'm not talking about the total elimination of it, though, that, I think, is still light-years ahead. After all, nature is the smooth operator steering the wheel and as we well know nothing can stop it, but at least let's ensure that sufferers have access to the best care possible. Including the most humane. Terry is of the mind that one of the available options should be assisted suicide. He wants to be able to decide when and where he should die, possibly aided by a loved one without any legal repercussions for him or her.

Terry's dread, however, is not just shared by those afffected by Alzheimer's. About the same time his documentary premiered on the BBC, the news delivered a couple of shockers. One concerned the alleged attack on a female resident at a care home by a male worker. The other one was about Southern Cross, Britain's biggest care homes operator and its struggle to stay afloat because of its inability to pay its rent.

All these items are related in the end: Terry's support for assisted suicide, the way some elderly people are treated in care homes, and the financial constraints under which many of these residences find themselves in our economically straitened times.

Would a person think of ending his or her life all of a sudden, if there was any hope of dying when "their time came" in a dignified way, surrounded by the people he or she cared about and who loved them in return? I don't think so. Would a person feel so despondent to the point where death would be a welcomed, soothing balm if we, as a society, showed him or her that we cared? I have my doubts about that. And yet, here we are at a crossroads: one arrow seems to point at a third age where, in order to be cared for properly, one will have to sell their own home; a second sign leads us to Dignitas, the famous Swiss assisted-dying group that helps those with severe physical and mental impediments die. And even that option is chiefly available to the well-heeled. The third prong of this fork forces us to confront an image before venturing down its path. It is the future to which some of us will be subjected: bad-tempered nurses and care workers leaving us in sodden beds for days on end, denying us food and water when we want them and abusing us physically and mentally when we dare to protest. Ironically the only company for whom 'Dignity' is paramount is the one trading in death when, really, the (still) living should be the ones accorded the respect and decorum they deserve.

I agree with Terry's stand on assisted suiced and, after having watched the programme, I came away thinking that should I fall prey to a terrible and terminal disease, I would like to have the right to end it all when and where I wished. If I was incapable of doing so myself, however, I would like my long-term partner to do it for me. What better leave-taking present than to die in the arms of the wife whom you so much loved and who returned the same affection in equal if not larger quantities?

But at the same time I can't stop thinking about what would (or will) happen if I ended up in a care home. In the same way that society - and that includes me, too - benefits from my contributions to it, be it through my taxes which help fund our cherished NHS and our schools, or through my cultural input as an immigrant, I would like that contribution to benefit me in my twilight years. Quid pro quo.

To be clear, not all care homes are like the Ash Court Centre, the scene of the alleged assault on the elderly female resident. Nor are our care workers 'Nurse Ratched' wannabes salivating at the prospect of inflicting pain on unsuspecting and vulnerable OAPs. The majority of them do a commendable job, sometimes under dire situations. Frequently for very little financial retribution. But when money comes before our human principles, then it shouldn't surprise anyone that scandals such as the one engulfing the Kentish Town-based institution break out. In order to maximise profit safeguards and checks are sometimes overlooked and staff hired with a cost-effective business plan in mind instead of a palliative one. Faced with this between-a-rock-and-a-hard-place situation even I would be on the Easyjet website trying to book a one-way ticket to Zurich.

As Terry says in the documentary there are plenty of people in the UK who are against assisted suicide. Some of them on moral grounds, and others on religious ones (ha, surprise, surprise!). I understand the motivation of the former. Helping someone die can become an excuse for unscrupulous relatives willing to take advantage of a frail person who is no longer capable of making decisions by themselves. But I, naive and gullible human being that I am, think that the immoral brigade will always be outnumbered by the principled one. Plus, not everyone has the dosh to top themselves off against the backdrop of the magnificent Swiss landscape.

In the end, it comes down to death per se and how we deal with it. In a totally unrelated article in the paper the other day the writer Karen Armstrong remarked on this very issue. According to Ms Armstrong 'we prefer to speak of somebody "passing away" and push the dying out of sight into hospices and nursing homes.' What's clear to me, too, is that we still can't make up our minds as to what to do with this - growing - elderly population. If they want to bring their lives to a halt, either themselves or aided by a loved one, that's to be frowned upon. If, on the other hand, they insist on living longer, then that's also wrong because who'll foot the bill for their care? No wonder Roger Daltrey was singing in 1965: "I hope I die before I get old". What I would like to happen in the next few years is that today's twenty-year-old, on coming across with the The Who's famous song, will be able to say confidently three decades henceforth: "That's a lot of old bollocks. I love being old." And when he/she dies that they do so with dignity.

Terry Pratchett's documentary can be seen in its entirey by clicking here. Please, be aware that it contains distressing images.

Labels: A Cuban In London, Cubans in London, music, My Generation, Terry Pratchett, The Who