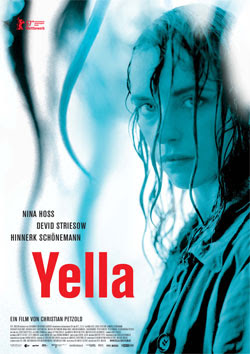 What if we try to escape from our past by running away into another dimension? What if that dimension is literally figurative instead of a construct of our minds? And what if that past caught up with us later in the unlikeliest of scenarios?

These are some of the questions that German director Christian Petzold tries to answer with 'Yella', a pessimistic, grim drama, which centres on the life of a woman (Nina Hoss) whose life is turned upside down when she attempts to leave her hometown for a new life and job with better prospects. Tragedy strikes when her violent ex-husband turns up on the day she is leaving, gives her a lift to the station and then tries to kill her by driving his car into a near river. Yella manages to escape and eventually she reaches her destination but discovers the job she was promised was a hoax. It doesn’t exist. It is in these circumstances that she meets Phillip, an unscrupulous investor, whose main agenda is to roam the country looking for smaller companies of which he can take advantage. Yella turns out to be a formidable sidekick and soon the two of them become a lethal duet, cheating their way into and out of deals. Parallel to this, Yella begins to experience small paranormal moments where she can hear voices or sounds from her past. Her former husband, thought dead, also starts to stalk her and when her relationship with Phillip moves from the professional to the amorous, her ex- makes an unwelcome appearance.

'Yella' is a visually striking film, that moves from a desolate East Germany - where the leading character's hometown is located - to the western side of the country. The landscape is a combination of urban modernity and vast fields.The movie also delves into the still unsolvable issue of East vs West. In recent years, German cinema has addressed this topic in flicks such as: ‘Good Bye Lenin!’ and ‘The Lives of Others’. The former is a comedy whilst the latter is a faithful and painful account of the role the Stasi played in hundreds of thousands, if not millions, of Germans. 'Yella', by contrast, could be considered a metaphysical thriller, more in the mould of the 'X Files'. However, I couldn't help noticing that it is the East German woman who gets corrupted by the West German ruthless businessman.

Having come out in 2007, 'Yella' is also quite a prescient movie in that it foretells the crisis that venture capitalism unleashed on an unsuspecting world a year later. The world of hedge funds, acquisitions and mergers is well illustrated, mixing moments of witty facetiousness (for instance, when Phillip explains to Yella the theory of the crossed-fingers-hands-behind-the-neck position) with instants of utter desperation which wouldn't look out of place in a David Lynch or Ken Loach film.

And the ending? I usually include spoilers in my film reviews. But not this time. You have to watch the ending. The first time I saw it I was confused. The more I thought about it afterwards, and the more I analyse it now with the benefit of hindsight, the more I've come to the conclusion that the ending is the icing on the cake of a powerful critique of modern society's self-harming tendencies.

Next Post: 'Sunday Mornings: Coffee, Reflections and Music', to be published on Sunday 11th July at 10am (GMT)