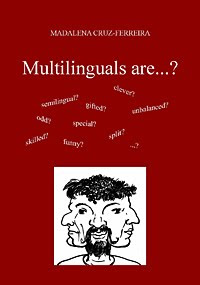 I'm sure that in years to come people all over the world will come to appreciate the efforts made by the likes of Madalena Cruz-Ferreira to raise awareness of multilingualism. And I know that I am not alone in thinking that as the global population becomes savvier in linguistic matters (alas, less so in cultural ones sometimes), this will have been made possible thanks to books such as 'Multilinguals Are...?' (Battlebridge Publications).

I must, however, declare, in the interest of fairness, that this review is impartial and unbiased. The reason for this clarification is that my blog was referenced in the illustration credits on account of one of the images Madalena used in her book. It was a cartoon drawn by my fellow Cuban blogger and long-time collaborator, Garrincha and you can read the original post here.

As readers and followers of this blog know, I have been an advocate of multilingualism for a long time, both from a professional perspective (I studied linguistics in university, in Havana) and from a personal point of view since my two children and my wife are all fluent in Spanish and English. In that respect Madalena's book provided answers to many of the questions I had asked myself many times.

'Multilinguals Are...?' is a fun, practical and unpretentious dissertation on the benefits, myths and misconceptions of multilinguals. The first element that caught my attention was Madalena's writing style: not confrontational, yet adamant and firm. Very early on in the book, she turns the tables on those who criticise multilingualism by asking a series of questions normally posed to people who use more than one lingo: 'Can monolingualism affect language development? Can monolingual development affect the development of a child's single language? Is monolingualism an advantage or disadvantage? What are the reasons to nurture monolingualism? How do people become monolingual?'

I confess that I'd never asked myself these questions because I had always assumed that monolinguals outnumbered multilinguals. This is not the case, as Madalena correctly states, and the truth becomes more obvious when you take into account that a person born in India, Kenya or Norway will be exposed to a myriad languages both in their immediate surroundings and in school from a very early age. When I worked in the travel sector, the company was owned by two brothers born in Kenya and fluent in Gujarati, Urdu, Swahili and, of course, English. They could switch from one language to the other effortlessly. Far from them being the exception to the rule, they were rather the norm. Most Scandinavians I've met can converse in English (learnt at school when they're very young), French, Spanish or German. Or in all of them. However, even in what Madalena considers to be a standard linguistic setting, the effect of acquiring a new language is seen as a miracle and the author is well aware of the danger this laudatory attitude poses. In her own words, 'Multilinguals should be wary of taking these kinds of comments as flattering because the problem here is of course that what is awe-inspiring cannot be normal'.

The book is divided in thirteen chapters with thought-provoking titles such as 'Multilinguals have no mother tongue, because they are not native speakers of any language', 'Multilinguals don't have many languages, they have many half-languages' and 'Multilingualism should be encouraged, but only in languages that matter'. The purpose of these eye-catching captions, in my opinion, is to shift the responsibility from the multilingual person, who has to put up with plenty of misconceptions about his or her 'gift', to the monolingual one.

Take Chapter 10, for instance: 'In order to raise multilingual children, you must speak to them in only one language'. It brought to mind the time when my son was born and my wife began to speak to him in Spanish, despite the fact that she herself had been born in the UK. We were under the - wrong - impression that if the two of us did not talk to him in my mother tongue he would never learn it. This approach, however, did the opposite. My wife is British, she learnt Spanish whilst doing her degree in university (although her dad comes from Gibraltar and his family from southern Spain), so therefore many of the phrases that I used with my son, expressions with which I had grown up, were beyond her reach. A few months after our son was born, my consort decided to switch to English and I agreed with her, and also thanked her for making the effort. Madalena puts this situation in context in the book. Here's an excerpt:

'We may start by asking ourselves why no monolingual family worries about the best way of raising their child monolingually. The issue doesn't arise in monolingual families because their use of language will, expectedly, be natural: the parents will speak to their child the (one) language that comes naturally to them, and the child will naturally learn it. In contrast, families, who decide to raise their children multilingually are bound to start at once seeking information and advice about what exactly should be done to achieve this purpose successfully. We may go on wondering why is it that multilingual should worry about this at all. In other words, what is it that makes multilingual hesitate to resort to what must come naturally to them to, as far as uses of language are concerned?'

Such a short book (my copy is eighty-six pages long) will not be able to cover everything related to linguistics. I would like, then, to add two more factors to the whole monolingual/multilingual entente (or discord, your choice). One is culture. It's not strange that monolingualism usually translates as monoculturalism, although many monolinguals are well-versed in multicultural matters. However, in my opinion, they are in the minority. Based on my personal experience, the more an individual retreats into his/her own - sole - language without attempting to reach out, the more his or her cultural perspective narrows. There's mention of this phenomenon in the book, but it is very brief.

The second factor is the relationship between parents/carers and their offspring. My wife's and mine biggest achievement in the linguistic area has been to raise two children who can speak fluently two of the most popular languages in the world: English and Spanish (number two and three, respectively, behind Mandarin at number one). For me this accomplishment is even more rewarding when one takes into account that in a foreign land the sound of one's children speaking one's native tongue and discussing their personal problems (grammatical and syntactical gaffes notwithstanding, and who cares about them, really?) in a frank and open way beats any academic feat they might carry through in school. It's one of the essential rungs on the ladder of respect, trust and friendship that lies at the heart of any parent/children relationship. Again, there's very little of that in the book.

But such observations are mere droplets in the vast ocean of wisdom and common sense Madalena navigates. I laughed out loud when I read her views on people who compare the human brain with a computer. Yes, Your Honour, I used to be one such culprit. Cruz-Ferreira states that: 'If you assume that the brain works like a hard disk, its contents get stored in more or less neat compartments. There must therefore be physical brain space dedicated to language too. You then assume, with the mainstream, that the "normal" language compartment fills to capacity with just one single language (...) And if you further assume, to complete the analogy, that the disk/brain needs some free space to be able to go about its housekeeping tasks properly, we have the ideal conditions that explain the havoc that multilingualism is said to wreak "normal" brains. Symptoms of "Warning: disk full!" crop up through, say, a child's refusal to use one language, adults' difficulties with learning new languages or language mixes from speakers of any age. Whichever the case may be, the error message is ascribed to glitches in language warehousing, where the little grey cells struggle about and waste precious brain energy to defend the territorial rights of their one brain-one language.'

Thorough thinking as demonstrated in the excerpt above is one of the reasons why 'Multilinguals Are...?' deserves more attention. I will be e-mailing publishers and editors in the UK, who, I gather, might be interested in promoting such an impressive book. For the record, I will be doing this without pursuing any financial interest whatsoever. If you're an editor or a publisher and receive an e-missive from me, please, do contact the author directly. As for you, dear fellow bloggers and followers, it doesn't matter whether you're monolingual or multilingual, go and buy this book. It will give you a powerful insight into a fascinating world, one of which you might already be part, or are thinking of joining: multilingualism.

Note: At the author's request, I have included the following links, a couple of which have already made it into the post.

In addition, all profits from the sale of the book go to Yuti (meaning 'unity'), a trilingual children's magazine in Sinhala, Tamil and English. This publication is distributed, free of charge, to Sri Lankan children, ages eight to fourteen, three times a year. For more information, click here.