The Book of Laughter and Forgetting by Milan Kundera (Review) 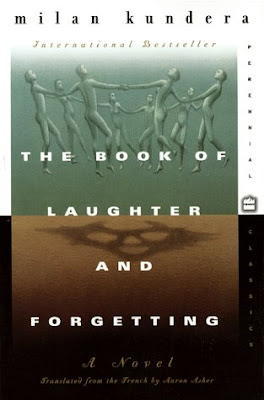 Milan Kundera is a man on a mission. And his mission is simple yet arduous: to preserve his country’s collective memory.

In 1968 Soviet tanks rolled into Prague to quell the uprising led by progressive forces against the totalitarian, Moscow-backed Czech regime. The aftermath of this invasion saw Czechoslovakia remain occupied until 1990. ‘The Book of Laughter and Forgetting’ deals with what one of the characters in the novel calls ‘the struggle of man against power’.

At the time of the Prague Spring (as this period became known) Kundera’s first novel ‘The Joke’ and his collection of stories ‘Laughable Loves’ were being published in editions of 150,000. After the Soviet invasion the Czech writer was dismissed from his teaching post at the Prague Institute for Advanced Cinematographic Studies and his books banned. He has lived in France since 1975.

To the seasoned Kundera’s reader (and I count myself as one), ‘The Book of Laughter and Forgetting’ offers yet another spin on the same theme of Stalinist totalitarianism. Milan had already touched upon it in ‘The Joke’ and delved into more thoroughly in ‘The Unbearable Lightness of Being’. But far from being repetitive, in ‘The Book…’ Kundera focuses on the existence and loss of humour, on the various ways in which laughter manifests itself – the Devil’s laugh vs the angels’ laugh- and man’s metaphysical attitude to laughter. Above all, Milan resorts to what I have come to label ‘positive negativity’ (I’m sure there’s a technical term for it in literature) where by means of a series of positive phrases, sentences and expressions the opposite is implied. His allegory of Stalinism as the dream of paradise is spot on. Here’s a world where everybody could finally live in harmony, united by a common belief. And it is through this archetype that totalitarianism attracts so many followers, especially during the early years of its existence (Cuban Revolution anyone?). Once the dreams of paradise starts to turn into reality however, those who oppose this golden dream end up in a prison/concentration camp in the outskirts of Eden.

It is hard to define the plot of this novel as in Kundera's own words 'this book is a novel in the form of variations.'

Mirek travels to the countryside to meet Zdena, a woman he once had a fling with. Marketa and Karel have constant run-ins with the latter's mother and so decide to move out. Gabrielle and Michelle are two American girls who are doing an analysis on a play by Ionesco. Tamina, the main character in the novel, is a waitress in a small café which belongs to a married couple in some provincial town in the west of Europe. However, Kundera states that 'this is a novel about Tamina, and whenever Tamina is absent, it is a novel for Tamina. Tamina dies in Part Six of the book. In the meantime there's also an explanation of the word 'litost' in Czech, which, to a linguist like me, was a wonder to enjoy and behold. And as in many books by Kundera there's sex, a lot of it, uncompromised, unbridled and taboo-less.

How to read this novel, then? As an allegory? Nein, Herr Kundera seems to be saying. In an interview with the American author Philip Roth that appears at the end of the book, almost like an epilogue, Kundera states what constitutes a novel for him and what to me would serve as a good guide for first-time readers of this important, contemporary Czech writer's oeuvre:

'A novel is a long piece of synthetic prose based on play with invented characters. These are the only limits. By the term synthetic I have in mind the novelist's desire to grasp his subject from all sides and in the fullest possible completeness. Ironic essay, novelistic narrative, autobiographical fragment, historic fact, flight of fantasy. The synthetic power of the novel is capable of combining everything into a unified whole like the voices of polyphonic music. The unity of the book need not stem from the plot, but can be provided by the theme. In my latest book, there are two such themes: laughter and forgetting.'

Labels: A Cuban In London, books, Cubans in London, literature, Milan Kundera, The Book of Laughter and Forgetting