A few weeks ago I was behind the wheel, as I'm normally these days that I'm in charge of the school run, going about my business as usual. The speed at which I was driving oscillated between twenty and thirty miles per hour, the car window was rolled down whilst a cool morning breeze caressed my face. On the radio John Humphrys was grilling yet another politician. Then, all of a sudden, as I tried to overtake a bus that was stationary, I realised what I was doing and what I was about to do, too. Unwittingly, I'd fallen into a pattern, following the car in front of me without actually thinking of my actions. Had I overtaken the bus on my left, I would have collided with another car coming in the opposite direction. Luckily I managed to brake in time. But not before seriously telling myself off for being so stupid.

It was not the first time that I'd made the same mistake. I once trod on cow dung on a walk through the countryside when I was in uni doing my work experience despite the fact that every single person in front of me had already done it. And moaned about it! At the time I was the head of a brigade working on orange trees and we'd decided to skip work (as we often did) in order to explore the area. No matter that the dozen or so members of my unit sank their wellies and Russian boots in fresh bovine faeces. I was also following the herd, albeit of a different kind.

I sometimes wonder how "hardwired" we are, human beings, to copy other people's actions, the impact this trait has on us and the benefits (if any) they might bring to us.

A case in point is smoking. This is the same example I use when I try to demonstrate to people, like my children for instance, the perils of lighting up. If you smoke, or have smoked at some point in your life, try to go back to that moment when you first held that cigarette in your hand and took the first puff. How did it feel? Nauseating, I think. You probably coughed like mad as well. But you did carry on. Why? Didn't that initial "experiment" put you off? Well, of course not, because all around you your mates were doing the same. Regardless of the discomfort, the teary eyes and the raspiness in their throats, they kept puffing at their roll-ups. To me this is typical of the social networking enviroment in which human beings thrive, but also it illustrates how it can lead to failure. Twenty or thirty years from that first cigarette some of your friends will be paying a visit to their GP to find out about that "dark cloud" in their lungs. Maybe you'll join them. 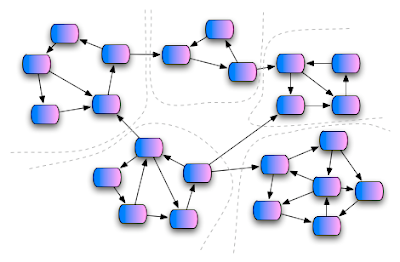 We build networks through our lives. It's part of man's (generically speaking)gregarious nature. Some of these connections start in school and last well until our twilight years. Others are more ephemeral. But each leaves a mark, no matter how indelible it can be at times.

I've always been interested in human interaction and this was intensified last year when I joined Facebook. Until then I was one of those refuseniks who saw Mark Zuckerberg's creation as an attempt to shorten out attention span even more (as if that was humanly possible) through a combination of LOLs, smileys, emoticons and snaps taken by a shaky hand on a mobile phone. However, I was able to re-connect with old classmates from my uni years and form an online community in which we do a lot of reminiscing. At the centre of this virtual reunion are patterns that are embedded in our genes. It's the reason why one of the members of this online group posted a photo of his wedding the other day and despite the fact that I didn't know him that well, I had a lump in my throat nonetheless. It was the black-and-white-yellow-around-the-edges colour of the photo that did it for me.

These social networks we create when we are younger have upsides like the one described before. They also help us find love and employment. Since we seem to be connected ad infitum, our future partner should ideally be three persons away according to the Six Degrees of Kevin Bacon game whilst our dream job should just be around the corner. But that's not real life. We know better than to make these assumptions.

The negative impact of copycat behaviour brought about by close human connectedness can be, on the other hand, often fatal: alcoholism, the aforementioned smoking problems and drugs addiction. It usually starts innocently enough and in such a subtle way that before you know it you're in it up to your chest. A spliff is passed around. A drink is shared. A needle is produced. We, humans, are certainly interesting, and so are the networks we beget.

Companies cash in on these interactions, whether they be along the lines of the mistake to which I referred at the beginning of my post (following a pattern set by others), or the individual who stands out in a crowd and defies the "herd mentality" to which he or she is being subjected. Or if you like, it's the clash between T-mobile's carefully choreographed "flash mobs" (groups of people dancing in joyful mood in Liverpool Street Station, east London, for instance) or VO5 and its status quo-approved rebellious stance.

It's amazing that human relations can determine sometimes what we eat, how we vote and how we educate our children. Such a statement, said or written so coldly, would probably provoke a stern response from those of us who believe we have the mental and physical capacity to make decisions about our diet, our political choices and our offspring. But scratch the surface and look closer and you'll occasionally find a complicated microcosm of self-doubts and nagging self-interrogation. Influenced in no small measure by the "herd mentality". Which is one of the reasons why we're fallible and make mistakes. And why some of those gaffes end up on Facebook twenty years later. And yet, there's still a certain beauty in it.

Next Post: “The Ground Beneath Her Feet (Review)”, to be published on Wednesday 2nd November at 11:59pm (GMT)

Labels: A Cuban In London, Cream, Cubans in London, music, Sunshine of Your Love