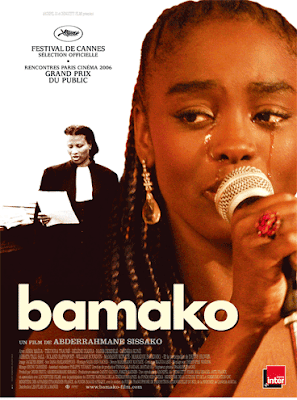 I still remember the first and only time I watched the movie Waiting for Happiness, Abderrahmane Sissako's meditation on migration. It was at an African film festival I had curated and managed and the feature was amongst a number of obscure submissions over whose reception I was fretting somewhat. Yet, I, and the rest of the audience were blown away by the director's subtle images of sand and sea, juxtaposed with a feeling of otherness and a state of limbo.

Whereas in Waiting for Happiness the setting is all whitewashed buildings and almost total tranquillity, Bamako is the opposite. The movie centres on a court case in the Malian capital where the plaintiff seems to be Africa itself and the accused are the World Bank, the IMF and other corporations. Beyond the premises there's the hustle-bustle that characterises an African city. However, to say that the court case is at the centre of the film is somewhat misleading because there are other subplots that are as interesting as, if not more interesting than, the main one. There're the marriage problems between a nightclub singer and her unemployed husband. There's also a photographer, who works part-time for the police, and who records marriages and funerals, choosing the latter over the former because they're 'more real'. There's even an out-of-this-world (and some might think totally unrelated) scene where people are watching a spaghetti western called Death in Timbuktu, starring Danny Glover and the Palestinian film-maker Elia Suleiman.

Sissako's achievement is in presenting an Africa that speaks with its own voice and in its own language. His intention is to celebrate the dignity of those who have very little but without displaying any kind of self-pity. At the same time he avoids the usual pitfalls of laying all the blame at the doors of those who are better off. During the court proceedings we hear stories from both sides. Some of the witnesses are very articulate and others aren't. The magic of the film lies in the combination of an off-the-cuff approach (Sissako has a reputation for hiring non-actors) and a calculated and sophisticated one, especially when it comes to the photography and setting.

The result is a stunning film where the viewer is challenged to come up with his or her own answers and where the protagonist, Africa, gets one of those rare chances to speak its mind. Another one not to miss.

Next Post: “Sunday Mornings: Coffee, Reflections, Music and Dance”, to be posted on Sunday 16th October at 10am (GMT)