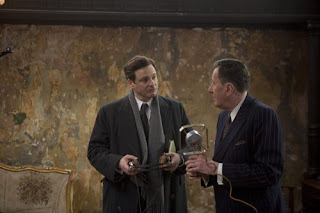 There's a very funny, short scene in The King's Speech that had me, in a manner of speaking, rolling on the floor and howling with laughter. It's one of the conversations between stage-actor-cum-speech-therapist, Lionel Logue and monarch-in-waiting Albert Frederick Arthur George, or Bertie as he was known to his family. The specialist is goading the future king to think of and say as many swear words as he can, though the latter is reluctant to bite his bait. Finally, the therapist asks George if he knows the "f" word, to which the stammering royal responds:

What follows thereafter is an explosion of expletives, tumbling out of George's mouth like hundreds of bats flying out of a cave all of a sudden. The scene works because of the self-restraint displayed at first by the soon-to-be last emperor of India, only for him to cave in at the last minute under pressure from his therapist. The distant and cool demeanour crumbles to the ground, revealing a human being who has suffered humiliation and bullying for most of his life. George might not have been expected to occupy the throne (that honour went to his elder brother Edward, who abdicated in the end) but a stiff upper lip was still de rigueur.

It's the same stiff upper lip that still fascinates people all over the world. Was I surprised by the success of The King's Speech? Not a bit.

I've come to see the relationship between the monarchy (and the upper classes by default) and the rest of the British people, not as a love-hate liaison, but as a love-"I couldn't give two hoots" one. Unless you come across a staunch republican, most people feel nonchalant about Lizzie and her son and possible successor, Charlie. You might find people who were reluctant to tune in to Prince William and Kate Middleton's wedding last April, but they were the same ones who didn't have any second thoughts about paying for a cinema ticket to go to see The Queen. This poses the following question: Isn't there a contradiction between the modern Cool Britannia picture that was plastered on the cover of newspapers and magazines everywhere in the late nineties and early noughties, and the obsession with all things royal and upper class right now?

The King's Speech is not the only successful product in recent years to have had a strong regal and toff flavour. Upstairs, Downstairs was a drama series originally aired on ITV in the 70s and adapted by the BBC in 2010. The title was a reference to the lives of the masters "upstairs" and the servants "downstairs". It was a ratings winner for the corporation last year. Downtown Abbey, another ITV programme, swept the boards at the Emmys last month. It seems that when it comes to producing a surefire cinema or television winner these days, Blue Blood trumps the British "It" factor any time.

I've no problem with the upper classes, including the monarchy; as an outsider I see them as yet another element of British life. Obviously, I'd sooner they paid more taxes and were responsible for their own upkeep rather than getting us, hoi polloi, to foot the bill. My curiosity is, however, piqued by the apparent contradiction between a country that is growing more and more racially, socially and culturally mixed per day (and this week the BBC marked the tenth anniversary of "mixed race" as an ethnic category on the UK census with the first installment of a three-part series on the subject) and a fascination with the past. Especially with the colonial, imperial one.

From a commercial point of view, this approach is understandable. The Crown sells, toffs in jodhpurs hunting deer in autumnal weather, rake in profits at the box office and, as I write, the dress worn by the Duchess of Cambridge on her wedding day this year has attracted so far approximately 600,000 visitors to Buckingham Palace. The bottom line is that once again Queen PLC+media exposure=Kerching!, above all, from overseas visitors. This transaction has also been helped by a government which is made up of many of those who belong to the "upstairs" class and where, for example, the Chancellor of the Exchequer comes from a privileged background (dad is the 17th holder of a hereditary baronetcy).

One of the downsides, and there are many, is that this newfound love for the type of establishment that Prince Williams represents, belies the true nature of contemporary Britain, especially in urban areas. For instance, the film Notting Hill, with Hugh Grant and Julia Roberts in the leading roles, took its name after the area where William Thacker's (played by Grant) bookshop was. However, any person acquainted with the neighbourhood would have been shocked to see that black people had been airbrushed out of the movie. On top of that the most famous carnival (and a very multicultural, too) in Europe is called... Notting Hill. But Richard Curtis, the screenwriter, was more interested in creating the illusion of a London that could sell (a London full of eccentrics like Spike, played by Rhys Ifans, greeting the press in his underwear, or toffs like Grant, stammering his way through the film) than the real London in which many of us live.

Another drawback is that romanticising the upper class too much stops us from conducting a critical analysis of their influence on contemporary British society and more importantly on our economy. Right now our cabinet is made up of people who, I'm pretty sure, have never signed on in their lives. Yet, they're the ones introducing austerity measures. That the majority are toffs with trust funds intent on destroying our welfare system, is scant consolation for the supposed success that movies and books based on their lives brings.

It is true that this fixation with the monarchy and the upper classes (and more specifically with notions of Englishness) appeals more to the occasional tourist to the UK, or to the person living abroad, for whom time stopped circa 1920, than to the resident of Blighty. But I've also noticed a growing interest amongst the younger British generation in trends and styles that better suit the Windsors and their ilk. Even some rappers, or as they're called nowdays, "urban artists", draw inspiration from Prince Charles' wardrobe for their clothes designs. Travelling in the opposite direction and probably returning the favour, we have Prince Harry's love for hip-hop and his attempts at MC-ing. I'd be willing to see this exchange as nothing more than a passing fad, but when you have the looming threat of Boris Johnson, mayor of London and another aristocrat, apparently plotting to succeed David Cameron as the next leader of the Tories and possibly eventually becoming Prime Minister, I fret, I seriously do. Because one thing is to amuse oneself with a scene where a future monarch attempts to loosen up his stiff upper lip. And a different one is when that stiff upper lip is the one pronouncing on your future.

Labels: A Cuban In London, Cubans in London, God Save the Queen, music, Sex Pistols