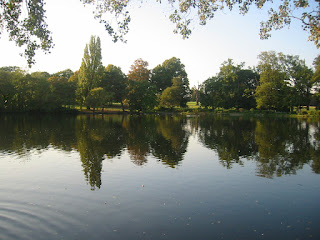 Certain seasons arrive all of a sudden: in later years winter (especially the Christmas period) has been summoned earlier than usual by mince pies that go on display at the end of August; spring showers turn up unexpectedly and summer is like a Houdini act: now you see it, now you don't. Or rather, now you're wearing four layers of clothes, now you're wearing almost nothing.

Autumn, however, floats about, hovers and finally comes down in a choir of rustling leaves. I first notice its appearance when the air takes on a crispy, metallic feel. Not cold, but cool, comforting and translucent. I, then, look around to see the changes. The victorius heather that reigns supreme in summer with its pinkish-purple flowers, sees its territory decimated. The hustle and bustle of June, July and August give way to a slower pace, the better to savour the stillness around you.

This year, September started strangely. Then, again, the weather has been most unusual of late. As I write, temperatures in London are predicted to rise to 27-28 degrees (Celsius). Earlier this month, the remnants of a hurricane that had swept through the eastern coast of the US reached the UK and gave us gales that wouldn't have been out of place on a tropical island in the Caribbean in the middle of October. But still, autumn is here.

Whereas for me winter's monochromatic landscape resembles a painting by Jackson Pollock on LSD, autumn seems to be the product of the soft brush stroke of a Degas or Monet. In the case of the former, an exhibition has just opened at the Royal Academy under the name "Degas and the Ballet: Picturing Movement". 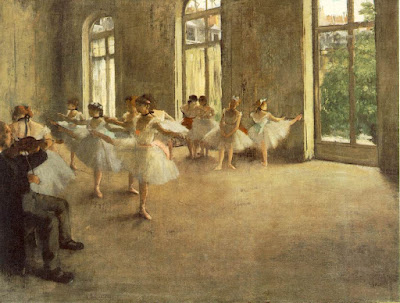 The pieces on display prove my point about autumn resembling an impressionistic painting. Degas captured hundreds of positions from various angles. Autumn works in shades. Hundreds of them. A leaf is not just either orange or yellow, but auburn and chestnut at the same time. Rumour has it that when asked why he was so interested in ballet dancers, Degas answered that it was because the dance form was all we had left of the combined movement of the Greeks. Autumn is Mummy Nature's last annual plea for life before it is plunged into the darkness of winter. That's why after a slow start, autumn suddenly explodes into a multitude of colours. It's nature's way of saying "I'm still here, still, alive and this is what I have to offer". The same happens in a ballet show when the soloist (man or woman) pirouettes endlessly in the middle of the stage. It's their own way to stand out. 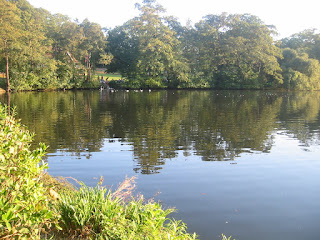 There's a third element. Degas's paintings don't normally depict performances but rehearsals. The effect is a frank, revelatory, behind-the-scenes exposé of the workings of a dance company. To someone, like me, who's been involved in the performing arts for a number of years, Degas's ballet pieces convey a feeling of Nostalgie. Likewise, autumn is synonymous with melancholy and memories. This leads to a contrast between the gold carpet laid out in front of our eyes and the cyan pigment that adorns our insides. Blue might not be the ruling colour in the surrounding landscape (unless you include the sky), but when it comes to soaking up the fresh, morning breeze stirring the coppery leaves above, enjoying the spectacle of nuts-munching squirrels and watching enviously the acorn-collecting children, you're damn right I've got the blues.

Next Post: “Of Literature and Other Abstract Thoughts”, to be published on Wednesday 5th October at 11:59pm (GMT)

Photos taken by the blog author.