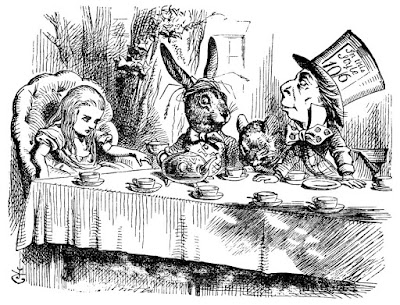 Recently I finally managed to watch director Tim Burton's version of Alice in Wonderland. More than anything else, what I really wanted to know was what the fuss was about and whether the praise heaped on the movie was fairly deserved. What stood out from the word go was that if I hadn't seen the original 1951 film, my feelings towards this recent reworking of Lewis Carroll's classic would have been somewhat ambivalent. Whereas Disney's take on the tale was based on Alice's innocence and curiosity (prevalent in the book), Burton's approach was more adult-minded. As expected, both Helena Bonham Carter and Johnny Depp stole the show with characters who were not that dissimilar from previous wacky and clownish incarnations, especially in the latter's case.

Lately there's been a slew of movies looking to provide a modern take on previous - and occasionally - well-established films. Sometimes the director pulls it off, as in the case of Tinker Tailor Soldier Spy (though not one belonging to a genre of my preference). There are also instances when the end result fails to satisfy. Above all, when the movie bombs, people often ask themselves why on earth someone would go to the trouble or re-working a classic if they lack the wherewithal to succeed.

However, despite the pros and cons of re-making films, this is part and parcel of the world of celluloid, along with profitable franchises and a frequent formulaic approach to storytelling. But is there any other creative industry where a similar style would be just as easily accepted?

More specifically, would/could we ever conceive of an author re-writing a classic? Including keeping the original title?

With visual arts, for example, the response is swift and simple: plagiarism. But what about literature? Could someone pen a new version of Ulysses, one where the wandering Leopold Bloom, going about his business on that one day, is not just a mere figment in Joyce's imagination, but also a red hot-blooded Jack-Bauer-like figure in charge of an anti-terrorist unit in early 20th century Ireland? With the same Latinised version of the Greek name as its title, of course.

Naturally, we could argue that literature is underpinned by the type of architecture that could well serve as a template for would-be writers. For Alice..., read similar books such as Peter Pan, The Secret Garden and The Jungle Book. Talking animals already made up the bulk of stories in ancient times, with even a moral thrown in at the end for good measure. Woods have rarely shed their image as the ominous sign where "things happened" (sometimes bad ones, ask Hansel and Gretel and Little Red Riding Hood, for instance). In fact you could even say that literature is governed by narrative patterns that attempt to pin down our infinite human experience into the equivalent of ready-made meals, therefore creating a limited variety of plots. The city that is in danger and needs a hero to rescue it (The Pied Piper of Hamelin), the woman who is in love with a man her parents disapprove of (Romeo and Juliet) But a verbatim replica like The Italian Job (the original, a 1969 cinematic vehicle with Michael Caine and Noel Coward, the "modern" version from 2003 with Mark Wahlberg and Donald Sutherland, transported to L.A. and minus Caine's iconic "You're only supposed to blow the bloody doors off!")? No.

Why is that, then? I would say that one of the reasons is that writers, like visual artists (photographers, painters and sculptors, for instance) have a more individual and self-centred approach to their oeuvre. Film-makers, who depend more on a collective, think nothing of re-doing a classic. This could be as a tribute to the original director, or because they think that they can improve on his/her magnum opus. Or simply because there's more money on the table. Which is why we can have Bride and Prejudice, the Bollywood movie, but no Pride and Prejudice, the new version by Danielle Steel. I don't think that I'm alone in thinking that a painter re-painting the Mona Lisa would probably take umbrage at him/herself. Same with a writer penning a second Moby Dick.

Or it might be that literature doesn't need dodgy Doppelgängers because it's self-sufficient. In an excellent essay in The Guardian a couple of years ago the playwright David Edgar referred to Christopher Booker's The Seven Basic Plots: Overcoming the Monster, Rags to Riches, The Quest, Voyage and Return, Comedy, Tragedy and Rebirth. Combine them at your leisure and you needn't look at For Whom the Bell Tolls or The Color Purple as works to reproduce word by word. There's plenty of fish for everyone in the sea of fiction if you can use your imagination effectively enough.

What does happen, as Robert McCrum stated recently, is that certain authors - some of them already famous in their own right - piggyback on the classics and adapt them to their own genre. One of McCrum's example is Lynn Shepherd's Murder at Mansfield Park, which turns the idyllic estate into a crime scene. It's, in my view, literature's own way of doing what cinema did with Psycho (the original, a superb film from 1960 with Anthony Perkins and Janet Leigh; its totally unnecessary carbon copy, a disaster made in 1998 with Vince Vaughn and Anne Heche in the leading roles), although with better results. And an excellent way, I would aver, of keeping us, literature lovers, curiouser and curiouser.

Next Post: “Sunday Mornings: Coffee, Reflections and Music”, to be published on Sunday 9th October at 10am (GMT)
Posted by A Cuban In London at 23:59

Labels: A Cuban In London, books, Cubans in London, literature, Of Literature and Other Abstract Thoughts, reading