The Ground Beneath Her Feet (Review) 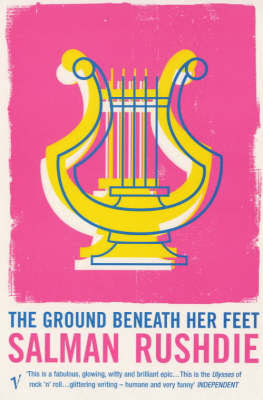 It's only fitting that one of the most playful contemporary authors gets to write a novel about two rock'n'roll stars and a no less rock'n'roll photographer. The Ground Beneath Her Feet, which originally came out in 1999, finds Salman Rushdie in a mirthful, but still pensive mood.

Spanning forty years, the novel focuses on the relationship between rock star Ormus Cama, the surviving half of twins, music phenomenon Vina Aspara, half-Indian, half American and the "invisible" Rai whose real name is Umeed Merchant.

Through these three main characters and a wild array of supporting ones, Rushdie weaves a tale about love, myths, religion and humankind. There's even time and space for paranormal activity, as exemplified by Ormus's communication with his dead twin brother. Both Ormus and Rai fall for Vina on the same day in 1950s Bombay, whilst on a day out with their families. By then, the teenage girl had had her own share of grief, including a bloodbath in her previous house in the US. Of the three leading characters, Vina's is probably the richest and most interesting. Hers is a mix of iconography - rooted in the ancient Abrahamic traditions -, feminism and femininity. The latter two turn her into a symbol of Diana, the late Princess of Wales, magnitude.

In such a long novel (my copy boasts more than five-hundred and seventy pages), Rushdie cleverly brings real people from the world of rock'n'roll to orbit around his characters. Thus, we get cameos from the likes of Elvis, Dylan and U2. In fact, the Irish band went the extra mile and recorded the song that, in the book, serves as the nexus between Ormus and Vina. The clip appears below at the end of this review. In addition, Salman also scatters these three stars (Rai turns out to be one of the better photographers of his generation) all around the globe, rooting them firmly especially in Bombay, London and New York.

There are parallels between the author's life and the story he tells, although he would probably scoff at notions suggesting that The Ground Beneath Her Feet is autobiographical. However, anyone familiar with Rushdie's social interactions might come to the conclusion that Ormus and Vina's shoulder-rubbing with the rich and famous might be a bit too similar to Salman's love of glamour and glitz. And they wouldn't be completely wrong.

Where to me the two strongest poinst of the novel lie is in its exploration of myths and its meditation on belief. The former reeks heavily of Princess Diana's death and the cult it inspired with the thousands of wreaths adorning the gates and fences of Buckingham Palace and the very public outcry it unleashed. This, in a land famed for its stiff upper lip. It's a similar situation with Vina Aspara when she's swallowed up by an earthquake in Mexico (fret not, I'm not giving the plot away; in fact, that's how the novel starts). The outpouring of grief at her death is so much that a whole industry based on her life and work does not take long to spring up and cash in. In regards to beliefs, Rushdie's always been very vocal against organised religion, especially in the wake of the fatwa issued against him by Ayatollah Khomeini. However, in The Ground Beneath Her Feet, Salman is far from a staunch, dyed-in-the-wool, Richard-Dawkins-style atheist. He is more interested in musing over the relationship between gods and humans, including those artists whom some people worship as semigods. Lennon comes to mind. He uses the imagery of ground-cracking or ground-shifting to show progress, evolution and also backwardness and procrastination, not from a biological or historical point of view, but rather from an artistic and human one. Above all, it's the way he plays (and I use the word in the sense of "toying") with reality and a "parallel world". One that we can only access through Ormus's double vision.

Although The Ground Beneath Our Feet came out twelve years ago, its message of love and humanism is as relevant as ever. Another great read by master Salman which I totally recommend.

Next Post: “Sunday Mornings: Coffee, Reflections and Music”, to be published on Sunday 6th November at 10am (GMT)