It has taken me sixty-seven days to write this column. As John Terry's foot slipped on the Moscow damp ground, Chelsea's hopes of European glory were given a deadly blow. 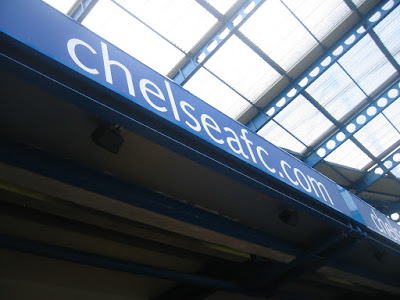 I have never intended this blog to be about sport. As a fellow blogger remarked recently, the mix of literary reviews, reflections on my life in Britain, more pertinently in London, music sections and recipes (with music to listen to whilst eating) form the bulk of this space. But, even the most hardened of souls would have felt for the England and Chelsea captain when his shot flew wide of the intended target.

That's why when I was at Stamford Bridge recently (for the first time in my life) I was struck by the image that presented itself in front of my eyes. A tractor was flattening the ground on the pitch. And as the vehicle moved from right to left I could not help thinking that that was a metaphor for how our season went. One by one the chances to silverware came tumbling 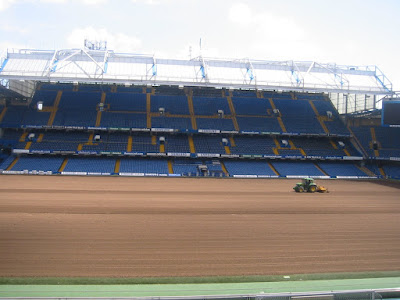 down like the mounds of soil on the pitch. The nail on the coffin was that night in Moscow.

Although I rarely write about sport on this blog that doesn’t mean that I am indifferent to it. I am passionate about both arts and sports equally, living to the core the Greek maxim: ‘Healthy mind in healthy body’. Both disciplines carry within them the ethos of enjoyment, resilience and narcissism. Where they both differ is in the pursuit of their goals. Whereas art concerns itself more with the process of creation (or it should, at any rate), for sportspeople, the result is everything. John Terry, on the night of Wednesday 21st May, 2008, probably left aside thoughts about the long road traversed by Chelsea to arrive at its first ever European final, especially after the most successful manager in the club’s history, Jose Mourinho, had walked out in September 2007. He probably excluded the facts and statistics that pointed at a club struggling to remain within sight of the champions, Manchester United, when its main players were either injured or on internationa 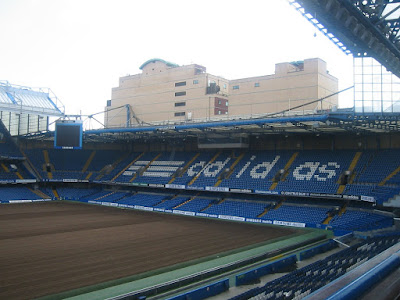 l duty. He probably chose to forget about players' discontent with Mourinho’s replacement, Avram Grant, who, by the way, was sacked by the club’s hierarchy following his defeat in the European Cup Final.

Art is more forgiving, though and so are its audiences. When on a warm Sunday afternoon I was in attendance at the Grand Theatre of Havana in the mid 90s nothing could have warned me that I was about to witness history being made. The bill promised a Swan Lake performed by none other than Lorna Feijóo, my favourite ballet dancer ever. Next to me sat my then German course teacher, an Austrian woman, with her boyfriend by her side. I had been raving about Lorna for so long that they both thought I was more than just a good acquaintance of hers.

The piece went smoothly and Lorna handled the various pas de deux with aplomb and vigour. But then came the strenuous and difficult role of Odile and the unexpected happened. Halfway through a spin, Lorna slipped and fell. The audience leant forward and covered their eyes with their hands and the atmosphere felt oppressive, as if someone had sucked the air out of the building. Lorna rose up once again and in a defiant, daring and challenging manner, dusted herself off (literally) and gave us a series of fuettés, each one of them improving on the previous one. The public went mad (not unheard of in Cuba) with cries and wild applause and the critics raved about the performance for a long time after.

Two top spectacles and yet what consolati on can John Terry get from a game that was almost won, but wasn’t? And that’s that the sad reality of sport, almost counts for nothing. Who knows? Maybe Terry could learn a thing or two from Lorna if they ever ran into each other.