Living in a Bilingual World (Symphony for Tenor and Orchestra) 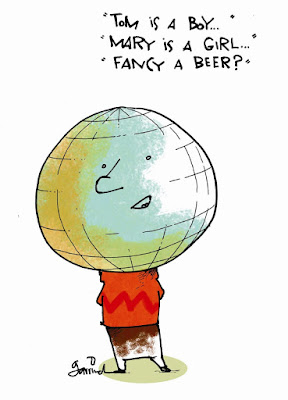 - Papi, why is it that not many people in our school speak another language? (this was Daughter) - What do you mean?
- Well, like we speak Spanish but the other children go to Spain for holidays and all they can say is 'Hola'.
- I am sure that they learn other words but they forget them as soon as they step off the plane after they arrive in the UK.
- Other children in my class always ask me what we are talking about when you drop me off at school and we are having a conversation. (this was Son)
- And what do you say?
- I just translate what we've been discussing because it is not like it is a secret or anything, is it?

This is a constant topic of conversation around the table with Wife contributing as much as I do. Many times whilst in Spain I have entered a bar only to find a handful of British expats leaning on the counter and bellowing out:

“Dos cervezas por favor.” (Two beers, please)
You could be forgiven for thinking that those are the only words a British tourist will manage to utter whilst on holiday in Spain or any other Spanish-speaking country. And you could be right.

The UK lies at the bottom of the league of European nations whose citizens can master two or even three other languages. A typical Scandinavian will speak English and French besides Swedish or Norwegian for instance. Go to Germany and most people will speak English as a second language, sometimes as fluent as their own mother tongue. Move over to Spain , and you will find many locals conversing in French effortlessly.

So, are British bad at languages? Al contrario. In defence of my adopted land, I have to mention some factors that have conspired against their taking up the learning of foreign languages more seriously.

The first one is that English is the recognised international lingua franca and this has created a sense of linguistic complacency amongst Anglophones. Travel to Nepal or Brazil and the chances are that you will come across someone who can muster a few words in Shakespeare’s language.

The second reason was the ill-fated decision in 2002 to make the learning of foreign languages optional after age 14.

The third and final explanation could have something to do with Britain ’s national sport: self-deprecation and self-effacement. Speaking a foreign language demands a type of mettle and exposure that could very easily be undermined by self-disparagement.

Still, there is room for hope. Following a study by the National Foundation for Educational Research, which showed that 84% of primary schools now teach children another language, the government is planning to encourage the take-up of languages overall. And as the proud father of two bilingual children I cannot vouch enough for the benefit the learning of a foreign lingo brings to a little one.

And who knows, maybe you will be able to take that conversation further than just two beers.

Copyright 2008
Illustration courtesy of Garrincha
Posted by A Cuban In London at 19:00