Some artists manage just one Killer Opening Song in their whole musical career. Some others get to release just a handful. But there are performers and bands for whom Killer Opening Songs are part of their DNA. One clear example is the British rock and pop group Queen.

I must declare an expression of interest here. I am a Queen fan. I have been one since age thirteen and I’m about to enter my thirty-seventh year of existence in a few months, so that would make me twenty-four years listening to one of the top bands in the vast rock universe.

So, there, I’ve written that paragraph. Now, you can either stop reading this post or the blog altogether and make tracks (no charge will be levied, mind) or stay for a while and learn a little bit more about one of the most dynamic and forward-thinking groups in rock’s short life.

Queen fans come under two guises, those who are enamoured of the band’s Greatest Hits Volumes (and can quote most of their hits by heart) and those who listen to their albums in their entirety and really understand the group’s ethos. I guess that by now you know which team I am in.

The first element that attracted me to this band when I was still a teenager and living in Havana, Cuba, was their pure and unbridled creative energy. From their debut album, ‘Queen’, with its nod to Led Zeppelin and The Rolling Stones, the band embarked on a never-ending experimental tour that brought them a huge following but also derision. It’s not strange that Queen never courted favour with British rock critics. In a country where self-effacement is the lifestyle of choice, captions like ‘No Synthesizers’ (plastered across the first seven albums) did not attract praise but mockery. And Freddie’s artistic vision (like for instance in the song ‘The Fairy Feller’s Master Stroke’ from their second album, ‘Queen II') did not find an enthusiastic audience amongst rock’s cognoscenti.

The other aspect that always appealed to me about this British band was their chutzpah. Theirs was a form of musical audacity that led them to see off more narcissistic rock styles, like punk, for instance, at a time when most people were writing their musical obituary.

That’s why it is a pleasure to bring to this column this week a song that encapsulates everything I have described above. Never released as a single, yet it has the same quality as ‘We Will Rock You’ or ‘Play the Game’ (two other anthemic Killer Opening Songs by Queen). Not sung live very often, however in a moment you will see footage of a very rare performance of it. The words are not in English, bar a few ones, but any real fan familiar with Queen’s music will know by now that the band sometimes indulged in French, Japanese and Spanish in their compositions. In short, ‘Mustapha’, the song I am uploading this week, was a very creative and challenging outing for his writer, Freddie Mercury. Sung in Persian, the song was very popular in France due to the large Muslim population in this European nation. The fact that I’ve selected this track from a plethora of songs used by Queen to open their albums with, attests to the brilliance and intelligence this band displayed for their entire twenty-year career (yes, to me they were finished after Freddie died in 1991, so that means 1971-1991 R.I.P.). Just to give you fellow bloggers and readers an idea of what else to find within the ‘Jazz’ album, where this song first appeared here’s a roll-call: ‘Fat Bottomed Girls’, ‘Bicycle Race’, (yes, the one with the naughty video), ‘Let Me Entertain You’, (a real camp-fest with words like ‘I've come here to sell you my body/I can show you some good merchandise/I'll pull you and I'll pill you/I'll CrueladeVille you/And to thrill you I'll use any device) and one of their stadium anthems, ‘Don’t Stop Me Now’, currently used in a car ad.

So, do you see my point? ‘Mustapha’ was nothing but the introduction to a huge musical extravaganza, the likelihood of which is hard to find these days amidst the anodyne and formulaic pop that gets churned out by production companies so often. What other songs from the album did not make it to singles or hits? Oh dear, you got me on a roll now: ‘If You Can’t Beat Them’, (the male rock version of ‘I Will Survive’ by Gloria Gaynor), ‘Dead On Time’ (heavy metal anyone?), ‘Dreamer’s Ball’ (Freddie said of this song in the ‘Live Killers’ album: ‘The things you have to do for money’) and ‘Fun It’ (precursor to Queen going disco in the 80s, but still a brilliant tune).

Now that I’ve held your attention for all this time, allow me to explain what you’re about to witness. The first clip is the original intro from the ‘Live Killers’ album, the Paris leg, which, as I have already explained, had the whole crowd asking for the song. The second clip is that aforementioned rare performance and the third video is just the album version, no funky visuals or anything.

I hope that you come away from this week’s column with a different idea about this British band that broke every single barrier there was out there in terms of creativity and originality. 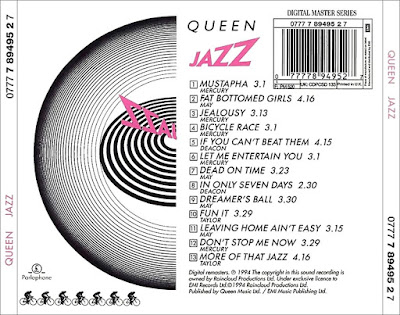