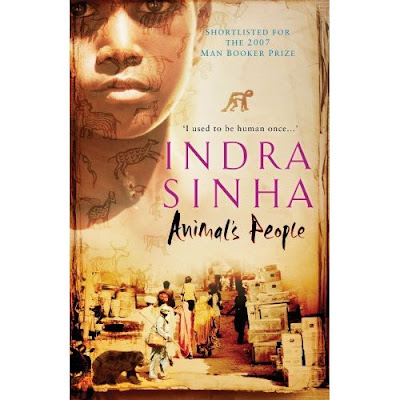 When in the early hours of the morning of 3rd December 1984 fumes emanating from the Union Carbide India, Limited plant, killed more than 3,000 people and injured thousand others, India was waking up to one of the world’s worst industrial disasters. The number of those dying immediately from exposure to the deadly gases and from their lethal effects later is roughly estimated in the hundreds of thousands.

It is against this backdrop that ‘Animal’s People’ is set. But instead of Bhopal we have the imaginary place of Khaupfur and au lieu de Union Carbide, we have the ‘Kampani’, a faithful replica of the former.

‘I used to be human once. So I’m told. I don’t remember it myself, but people who knew me when I was small say I walked on two feet just like a human being’. This opening sentence in the novel is the first snowball that sets in motion the powerful avalanche of feelings, emotions and conflicts that slaps us across our face and shakes us to our very core. The reader is invited to a true feast of what human life becomes once hope is almost gone. Throughout the three hundred and sixty-pages of the book, Indra Sinha introduces us to a whole array of characters full of flaws and virtues and whose lives are intertwined by what happened on that night.

Animal, a boy with a crooked back as a consequence of the chemical disaster that befell the village, narrates the book and it is his mix of Hindi and broken English that draws the reader in immediately. First, by trying to decipher the words he uses, afterwards this changes to an attempt to understand his feelings.

The other characters include Zafar, a romantic revolutionary who spearheads the Khaupfuris’ struggle for justice. His girlfriend Nisha is another strong personage, torn between her Hindi identity and Zafar’s Muslim roots. Her father, Somraj, a firm and law-abiding citizen is a singer whose voice was affected by the events of that night. Elli, an American doctor, who arrives in Khaupfur all of a sudden and unannounced with the purpose of making a difference to its inhabitants is a victim of the emotional roller coaster the villagers suffer from. Ma Francis, a French nun who has looked after Animal since he was a small child, completes the cast.

Indra’s main achievement is to weave a story that has social and political overtones with a love triangle. Animal, a twenty-year old who has been walking on all fours like a quadruped since he was a child, is besotted with Nisha; he loves her more than anything in this world. Nisha wants to marry Zafar, but she is aware of their cultural differences. Zafar wants nothing more than justice for Khaupfur, whose inhabitants are still suffering the consequences of the ‘Kampani’s’ negligence and abandon. He also loves Nisha but knows that the future is nothing but a chimera until the perpetrators pay their dues in a court of law.

Sinha’s use of humour (especially the sexual situations Animal finds himself in) is a welcomed relief in a novel that is politically charged. The narrative follows a series of tape recordings that Animal makes for an Australian journalist (Ostrali jarnalis) and far from following a set structure, some chapters are longer than others. The novel, thus, flows like a river.

The author’s other achievement is his use of political rhetoric. Far from falling into self-indulgence he constructs his characters around the disaster caused by that night and its aftermath. His prose is carefully weighted and beautifully embroidered across the pages of the novel. A metaphor here, a harsher tone there. Instead of using Khaupfur as a tool for emotional and aesthetic effects, he chooses to build hope out of the mud huts and the poisoned water.

Primo Levi, in his memoir ‘If This is a Man’ wrote: ‘Sooner or later in life everyone discovers that perfect happiness is unrealisable, but there are few who pause to consider the antithesis: that perfect unhappiness is equally unattainable. The obstacles preventing the realisation of both these extreme states are of the same nature: they derive from our human condition, which is opposed to everything infinite. Our ever-insufficient knowledge of the future opposes it: and this is called, in the one instance, hope, and in the other, uncertainty of the following day ’.

In ‘Animal’s People’ Indra Sinha proves that uncertainty can well become a weapon to make hope come true.
Copyright 2008
Posted by A Cuban In London at 19:00