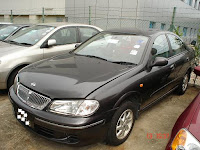 Cars, cars, cars. They are useful, neccesary, some may even say indispensable. The truth is, though, that they make our life easier. Their function is very simple, they serve as a vehicle to transport us from A to B. So, why is it so essential to have the latest make of a particular car? Why do some people fuss over this or that Ford, or this or that VW? To me, there are just a handful of elements I would be concentrating on if I was looking to buy a new motor (something I have never done in my life). Colour would be one, blue or black being my favourite ones. Make, as in VW instead of Ford, although taking into account that our car is a Nissan and it's turned out to be very good, I would probably go for that one brand. And functionality. What do I want it for? For the daily grind? Then, there's no point in getting a Chelsea tractor (that's a 4x4, by the way, for those of you who don't live in Britain, or rather, in London). But if I need it for longer journeys, then an eco-friendly SUV would be a better option.

What I can't see myself doing and I am lucky to have a wife who doesn't do it either, is change our vehicle everytime a new model becomes available. I might be a consumerist, but I do have my limits.

Music is pretty much the same. Certain songs have stood the test of time and they remain classics for that reason. However, you always get second-rate musicians or even brilliant ones trying to re-invent the wheel and attempting to add their own input to what is already a masterpiece, only to ruin the original work completely. And please, Annie Lennox and Wyclef Jean, take no umbrage for this tirade. Your respective cover versions of songs penned by Bob Marley and Pink Floyd did not go down very well with yours truly. Neither did they with many folks I know.

So, what follows below is what happens when an artist truly respects the piece they are covering and not only injects their own energy but maintains the original idea. Sinead O' Connor did it with her take on Prince's song 'Nothing Compares to You', to the point where no one believed it was originally by the Artist Formerly Known as Prince. Ditto Led Zeppelin and their cover version of 'When the Levee Breaks', originally sung by Memphis Minnie. And as the proud owner of both records (the Zep and Memphies') I can safely vouch for the quality displayed by the British band in that track in their album Led Zeppelin IV (or the one with no title).

So, there you have it, when it comes to cars, if it ain't broke, don't fix it, and if it's still going, then, let it go a little bit more. As to music, the same rule appplies, if you're going to rework a classic, please, please, please, make sure that you have what it takes to make it work. The second part of this post will appear next week.