Living in a Bilingual World (Cantata) 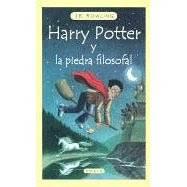 Muggle or muguel? Quaffle or cuafel? Bludger or...? Oh, well, I owe you that one.

For the last couple of months I have been reading the Spanish translation of 'Harry Potter and the Philosopher's Stone' (Harry Potter y la Piedra Filosofal) with Son and the experience has been both rewarding and bonding.

However, the linguistic pedant that dwells inside me has noticed how certain words have been allowed to remain unchanged from the original text in English. And this conundrum has caused a nice debate between Wife and me.

I am of the opinion that when converting the words and phrases of a particular language into another one, one must observe the golden rule of translation: 'Translate ideas, not words'. And although it's close to two decades now since I first came across it, I have tried to follow that maxim to the letter. Yet, this rule does not explain what to do when one encounters made-up words in the language we translate from. Shall we leave them the way they are? Or shall we at least attempt to bring them into our own language spelling them in a way suggesting that that was the way the author would have done it had he/she written in our language?

I am pretty sure that opinions on the matter are divided. However, occasionally I lean towards the latter case. And 'Harry Potter...' is a good case to illustrate my point.

Since the book takes place in London and we all know that English is the official language spoken by the denizens of the British capital, it would be really silly to try to translate street names and main characters' monikers (I am sure some of them could do with a Spanish translation, but let's not get too pedantic, shall we?). The issue is when we enter the realm of fantasy. A muggle (a person with no magical powers) could well be a muguel in Spanish. The spelling is similar and the word's semantics would not suffer. Likewise, the quaffle (the ball used to play quidditch with), could perfectly become a cuafel. Even the pronunciation is similar, let alone the spelling. So, why not?

I reckon that one of the reasons why this approach is not taken into account is reverence towards success. If the Harry Potter series had not become the financially rewarding franchise it has turned out to be, it would have been far easier (or less difficult, for it's never easy for a translator to stick their hands in the fire without getting burned) for Alicia Dellepiane, the person credited with bringing the British hero to Spanish-speaking peoples, to 'improvise' with elements of her own volition. But because the series has done remarkably well, there's a sense of genuflection towards and awe of both the author and the novels that probably (I am speculating here) deters translators from 'mucking about' too much with the original text.

The second reason derives from the first one in that Harry Potter, like many other franchises before it, creates a universal language that both children and teenagers (and adults!) default to. And whether you speak French, German or Portuguese, you will know what a bludger is (yes, I haven't forgotten, I still owe you that one!). And who wants to break up this harmony? Moi?

The third reason is our 'beloved' Royal Academy of the Spanish Language. Note the quotation marks, please. With close to 320 million Spanish speakers worldwide, is it not time to do away with such an archaic institution? English, my second language and the one I majored in at university, owes much of its international domination to a fluid and modern system. Namely the absence of a central body dictating all the different Anglophone nations how to use their lexicon. It is not surprise that the two languages that have suffered the most since the end of the World War II have been French and Spanish. The former through the loss of its colonies and the demise of its empire, the latter through holding to an ancient system that requires proof of use for new words to be accepted officially. The truth of the matter is that many of these words have been used for years, if not decades, or sometimes even centuries. The most vivid example I have is with 'fortísimo' (strongest), the 'correct' way according to the Academy and 'fuertísimo', more widely used since it comes from 'fuerte' (strong). It took centuries for the latter to be accepted into the mainstream, but surprise, surprise! The mainstream, i.e., the people who speak the language, had already been using it. True, not on television, radio or any other type of official media, but it was out there and it made sense. So, why deny it?

And that's probably why many translators leave certain terms the way they are in the original language, rather than trying to convert them into a version that resembles more the words in the language being translated to. Wife insisted that this was important to maintain a sense of continuity and not destroy the intention of the original text. But my point is that it doesn't destroy it, it enriches it. Besides, I very much doubt that the same reader who digests the Harry Potter books in English will be doing the same in German, French or Arabic. So, no harm done. Wife's other argument is that certain names should not be changed at all, ever. I knew what she meant because on some occasions she has brought my attention to the fact that I say Támesis instead of Thames . But that's the same for English-speakers who say Havana instead of Habana. And since we're there, why the 'j' sound in the English version? 'J' as in 'jugo'? The Spanish 'h' has not sound, a phenomenon I remarked upon in a recent column and for which I used Hamlet's soliloquy (talk about globalised world, this is globalised theatre and language). In the end we both agreed that neither was I going to change Alicia's mind (the title's translation suggests that the stone is the philosopher and not that the philosopher owns the stone, rather different meanings, I would say), nor would my way of calling the famous river that divides London into north and south change.

As for Harry Potter and the translation of certain words from English to Spanish, maybe I should not beat myself up about it too much. Given the current legal climate in the JK Rowling's camp, hush-hush is a better policy than trying to come up with alternatives for the words she has already made up. A lawsuit is the last thing I need, believe me.

However I cannot resist imagining what bladyer would read and sound like au lieu de 'bludger'. Just don't tell anyone at the Royal Academy of the Spanish Language, please.