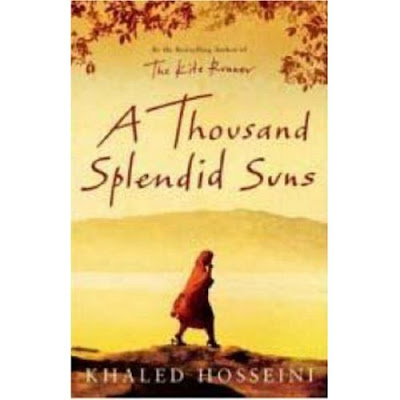 A certain phrase in Spanish ascertains that 'segundas partes nunca fueron buenas'. This refers to the public's perception that a sequel will never do as well as the original oeuvre, be it a movie, music album or fiction book. This also applies to second outings by literary authors, film-makers or singer-songwriters regardless of their follow-up's relation to their predecessor. A tad bit fatalistic, yes, but that's Spanish for you.

Thank God, then, for writers like Khaled Hosseini, who can turn that aphorism on its head. In 'A Thousand Splendid Suns', the Afghan author demonstrates again (as if proof were needed indeed!) why he is such a masterful story-teller, capable of combining recent historical events in that Asian nation with fiction. The result is a much more mature and balanced book, without the melodrama of his debut novel 'The Kite Runner' and with a very unusual powerful insight into the plight of Afghan women.
And it was this unusual insight that drew me further into the plot. Very rarely we get the opportunity to glimpse into women's lives from a man's perspective. Be it maladroitness or laziness, most attempts to describe the female world by the male of the species end up in shambles. Khaled addresses this issue in an adept way. He passes no judgement on his female characters even when they commit the most heinous acts and uses historical events as a backdrop against which to project their decisions, or the lack of them thereof. He also has a peculiar way in which to voice these women's innermost feelings such as betrayal, loss and hatred.
The first leading female character we encounter is Mariam, an ethnic Tajik born out of wedlock, who grows up near Herat in western Afghanistan. This 'illegitimate child' tag is nothing but the beginning of a series of tribulations and ordeals that accompany her throughout her life. It, however, takes a turn for the worse when she discovers in the space of twenty-four hours that the father she has idolised for many years does not love her back and that her mother chooses to end her own life rather than put up with her offspring's alleged desertion.
Mariam is married off to Rasheed, a cunning middle-class shoe-maker who, having lost a son in a drowning accident years before forces Mariam to produce a male heir. When this fails to materialise (Mariam miscarries three times), the consequences are dire.
Into this mix comes Laila, a vivacious child from a Tajik family. Laila's father is an educated man with an open mind, whereas her mother is a rather enterprising woman with a knack for hard chores. After losing her two sons in the fight against the Soviets, Laila's mother falls into despair. With Moscow withdrawing its troops from Afghan soil, the country enters a civil war which claims both Laila's parents as victims.
On her own now, Laila goes to live with Mariam and Rasheed. Unbeknownst to her Rasheed is already making plans to marry the 14-year-old. When Laila finds out that she's pregnant with her childhood sweetheart's baby, she capitulates and accepts the marriage offer.
What follows thereafter is a series of incidents that best explain why women are still at the bottom of the ladder in the social order. I argued that point in my review of Marilyn French's novel 'The Women's Room' and it's worth returning to this issue. A woman, whether in a western society or in a tribal one, still does not enjoy the full benefits that are accorded to modern polities in the 21st century. Namely, respect, freedom of choice and flexibility (both at work and home). The recent debates on abortion both in the US and the UK, the issue of genital mutilation and the effect of civil wars (Sudan, for instance) and illegal invasions (Iraq) affect more the female population than the male one. There's a telling moment in the novel when Laila's father, Hakim, makes a passing comment to her daughter on how the Soviet presence has inadvertently brought women more to the foreground. Yet, it is these same troops that kill his two sons.
Through both Mariam and Laila's eyes we see the catastrophic effects of the ill-advised Soviet invasion and how the fallout of that conflict fuelled a crippling civil war culminating in the arrival of the Taliban in power.
Khaled takes a no-holds-barred approach when writing about his native country and leads us, curious readers, through a forty-odd year period which covers many social and political landmarks in the history of Afghanistan, from Mariam's childhood down to 2003, two years after the Taliban is ousted. There are tears aplenty and surely readers will avert their eyes in certain parts of the novel, but he also weaves these moments with photographic passages like the one where Laila's father takes her to see the Buddhas of Bamiyan. From the top of these famous statues, Laila's gaze embraces the natural beauty that Afghanistan has to offer. It's the destruction of this beauty and the hatred towards anything that resembles it that despairs her most.
The main strength I found in 'A Thousand Splendid Suns' is that the novel, unlike 'The Kite Runner', only ventures out of Afghanistan once and that is to neighbour Pakistan. It was this localised approach that worked for me when I read it and probably the reason why so many readers consider it a far superior work to that of its predecessor.
Now that Khaled has overcome the 'second book syndrome' (and I have also heard through the grapevine that a motion picture production based on the novel is in the pipeline) I can't wait for his third book to come out. That is also a side-effect of writers who succeed with second novels. When the British writer Zadie Smith released 'The Autograph Man' years ago, I had been waiting for it avidly, since I had already read and loved 'White Teeth'. Needless to say, 'On Beauty', her latest novel was anticipated with the same zeal and consumed with similar passion by yours truly.
'A Thousand Splendid Suns', thus, breaks that old adage about 'second parts never being good'. And Hosseini, in chronicling the lives and works of his countrymen and women in such a respectful and compelling way, leaves the reader fully satisfied...
... but craving for more.
Copyright 2008
Posted by A Cuban In London at 19:00