'She did not really like her. She would not be the in a hurry to find fault, but she suspected that there was no elegance; - ease, but no elegance. - She was almost sure that for a young woman, a stranger, a bride, there was too much ease. Her person was rather good; her face not unpretty; but neither feature, nor air, nor manner, were elegant. Emma thought at least it would turn out so.' 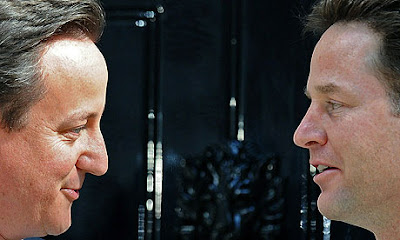 Honeymoon periods are not supposed to last long. Daily grind and cohabitation put paid to that notion pretty quickly. However, pre-emptive strikes against yet-to-be-tried political systems are just as childish.

A few months ago I wrote a post on this blog about how and why I became a cynic (you can read it here). It's ironic that I have now to do a volte-face and assume a Pollyanna position (well, semi-Pollyanna, let's not push it).

Like many around the country I was aghast when I saw David Cameron arriving at Buckingham Palace last May for his appointment with the Queen in order to be ordained as prime minister. Different feelings coursed through my veins, the majority of a negative nature. But when he announced that his government would be a dual split with the Liberal Democrats rather than a Tory autocracy, I breathed a sigh of relief. And that's when the problems began.

Contradictory, I know, but then politics is contradictory. The first measures taken by the incumbent Clegg/Cameron duo (and, please, please, journalists and political commentators everywhere, stop referring to those two as if they were in a civil partnership; it's tiring, boring and detrimental to gays. It was probably funny for one nanosecond, but the joke's wearing thin now) were actually quite progressive: their decision to stop the database, to cancel out the building of a third runway at Heathrow airport, to lower the prison population (Ken Clarke waxing lyrical on Radio Four's 'Today' programme about how it's necessary to transform our penal system was as surprising as it was welcomed). These were brave and bold steps that gave the impression that here was the fresh start people were asking for and that Labour had failed to provide for many years. However, like a pack of sweets-deprived gang of five-year-olds the media continued to hound its prey. For an example of the idiocy displayed by the British media, please, click here to watch a clip of the edition of the popular BBC programme 'Have I Got News You' that came out straight after the general election. At 3:55, journalist Julia Hartley-Brewer (of the Daily Express, a tabloid rag that malfunctions the day it doesn't carry a story about Princess Diana and it still is faulty when it does) seems to have a problem grasping the concept of a coalition government. Thank God for 'The Thick of It' Chris Addison who puts her and any other puzzled hacks in their place.

The price, we, the population, pay for this pirahna approach is that when problems do occur, we no longer have the energy to combat them. Because we've wasted it in mindless drills, usually led by a voracious media. And dear me, there are problems aplenty now!

As I wrote before, honeymoon periods have a short lifespan. And the one this coalition enjoyed with the electorate was brought to an abrupt halt as soon as David Laws, the (now ex-) Chief Secretary to the Treasury, resigned from the government in June following false claims for expenses. The latest instalment in this I-don't-love-you-anymore saga was Michael Gove's, the education secretary, botch-up in cancelling out Labour's Building Schools for the Future programme. He mistakenly had suspended capital spending for 715 schools which thought they could go ahead with projects they had in the pipeline. Mr Gove was forced to apologise in the House of Commons. And as if to add more snow to the avalanche of political malapropisms rushing towards us, we had a few days ago Andrew Lansley, the health secretary, saying he wanted to shake up the NHS in order to 'liberate' it. Is Lansley the new Mandela? A freedom fighter heretofore in disguise? The long-term effect of Lansley's plans will be the elimination of one of the services of which most British people (and I've got the evidence to back me up) are proud. But as I mentioned before, our brio is wasted debating whether Chris Huhne, the Energy Secretaty, should resign or not, following allegations that he'd cheated on his wife.

There are two issues to consider in the current political and economic climate. One is that cuts are necessary, and that not all of them are bad, and the other is that we need to learn which fights to pick. Otherwise we'll sound samey-samey. As an example of the former, Stephen Jones's column in Times Education Supplement (the TES, Friday July 9, 2010) was a breath of fresh air amidst so many voices crying out: 'No cuts!'. Stephen writes about the Quasi-Autonomous Non-Governmental Organisations, otherwise known as quangos. Contrary to their name, these are bodies created by the government which are allowed to spend taxpayers' money (that's you and me, reader) but are not accountable to us. Just in education, Stephen reckons there are thirty-three out of more than a thousand. A small amount one might think, but due to the ever-changing nature of quangos (and that's got to do more with their funding streams than volition) it's hard to keep a tab on all of them. Jones sets off on an expedition to find out more about these organisations and the results are hilarious... and sad. Here's he, trying to learn about the Further Education Unit: 'I determined the other day to find out all about the work of the Further Education Unit (FEU). I was too late - by 15 years. In 1995, the FEU became the Further Education Development Agency (FEDA). Don’t bother looking for that either: it was humanely put down in 2000 when the Learning and Skills Development Agency (LSDA) was founded.'

What the example above shows is that when the coalition government recently announced that it was going to get rid of a few quangos, several voices rose in unison to protest. Actually, based on the evidence presented by Jones and other education practitioners, I don't think we would miss many of these (government-backed) non-governmental organisations. In fact, I don't believe we would notice their disappearance either.

Our concentration would better be placed, in my opinion, on press releases coming from Whitehall regarding Cameron's Big Society. An idea that was first mooted during the running to the general election by Team Cameron, it was discarded just before the first television debate. It has re-appeared recently and this time it arrived at the same time as the budgets cuts were announced. The fact that David and Nick are asking people to do more unpaid work in their local community should be placed in the same context as private sector's deliverers of public services being given even more free rein to come in and kick out voluntary and community groups that have a long-standing, trusting and fruitful relationship with their members. Now, that's a battle worth fighting for.

The fact that Jane Austen's Emma is right about Mrs Elton (the character alluded to in the opening paragraph of today's post) does not validate the former's attitude. It's true that Mrs Elton turns out to be snobbish, annoying and controlling (the passage where Mrs Elton tells Jane Fairfax not to go to the post office again because if the lattter gets caught in the rain she will get a cold, is excruciating) but that doesn't mean that Emma is right. Innocent until proven guilty? Or the other way around? Even an old cynic like me would know which one to choose.

This is all from me for the time being, my lovely readers and fellow bloggers. I'm shooting off on holidays to the wonderful Welsh countryside, so forgive me, my cyber-friends, for not visiting your beautiful bloggy-houses as often as I usually do because I will be incommunicado. Yes, that's right, no telephone (or mobile), no television, no computer, nothing. Just family, greenery, beach and books (and yoga in the morning. There, that's a nice sequitur to last week's column). I'm planning to re-read "Uncle Tom's Cabin" and finally sit down and devour (and hopefully enjoy) Karen Armstrong's 'A History of God'. I will also take my Shakespeare's Sonnets Volume, which I rarely leave behind when I'm away. I tend to appreciate his poetry more than his plays. Saying that, a re-read of 'Othello' beckons some time soon.

In the meantime, my blog will remain active. Continuing with the same idea I had before the Easter break of posting a selection of 'Greatest Hits', you will (hopefully) read some of my earlier columns, when I was just a wee, teeny, blogger, back in 2007.

It's been fantastic reading your blogs and sharing ideas and opinions. I realise that not always we've agreed on certain issues, but respect has always been present in both posting and feedback, and for that I thank you all, from the bottom of my heart. Have a nice summer break, everyone.

Next Post: Greatest Hits - 7 'Living in a Bilingual World', to be posted on Sunday 1st August at 10am (GMT)