When I'm not contributing to my local community's wellbeing via my nine to five job as an education coordinator, I can be found joining the virtual one, through my blog, or submitting a review to an online mag (or trying to get them published in the national press, sometimes to no avail). Alternatively people can also spot me on the board of the Association of Modern Cynics, a somewhat loose and informal (dis)organisation with thousands, if not hundreds of thousands, of followers. From people who strive towards moral excellence to those for whom nihilism is the ultimate goal in life, the AMC has it all. 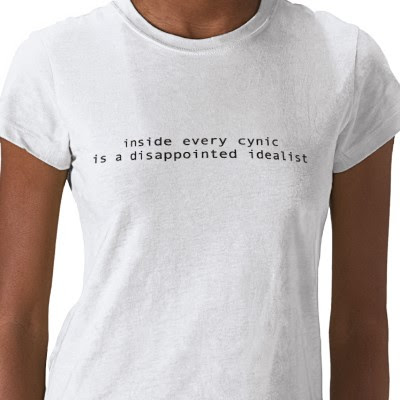 How and why did I become a cynic? The answer is rather easy: the economic and social class division to which I woke up in my teens in Cuba. If you're born in a society where from the outset you're told that everybody is equal, only to find out later on that the government was telling porkies the whole time, the result will surely be disillusion. But rather than adopting a combative position towards this newfound reality, I opted to stay on the margins. Don't rock the boat. Look at what happened to Orlando Zapata Tamayo. And if you think that maybe cowardice got the better of me, consider for a second that a cynic sometimes does more damage to a dictatorship in the long term than a dissident who's more vocal in his or her opposition to the government. The latter is scapegoated by the regime and shown to future human rights campaigners as an example of the fate awaiting them if they persist in their efforts; the former is harder to engage politically and can corrode the status quo from within.

But what happens when cynicism becomes your default more to deal with the world? When it loses its original meaning, that of the pursuit of virtue?

Accusations of bullying, expenses claims (including that channel), non-dom status, alleged tax-evading and inchoate policies. When it comes to the political scene in the UK nowadays there's no shortage of reasons that could go some way towards explaining why young people are frustrated and their elders feel shafted. At least, though, we have moved from Carole Caplin, Cherie Blair and Bristol flats (and no, the latter is not rhyming slang for anything).

But, I think there's a difference between an MP using the system to his/her advantage to claim for a duck island/moat and a company like BAE being let off the hook after alleged bribery charges. And no, I'm not excusing those who abused the expenses structure but selling jet fighters to dictatorships around the world is far worse in my book than dodgy accounting. Plus it gives more ammunition to us in the Doubters Brigade. At this point it's worth recalling Oscar Wilde's famous words in 'Lady Windermere's Fan': 'a cynic is a man who knows the price of everything but the value of nothing'.

And it is the second part of that quote that interests me more. What the current political situation translates as is lack of faith (broadly speaking) in everything, from country to party. Cynicism, when allowed to grow disproportionately, goes beyond rational and constructive criticism and it ultimately becomes a self-destructive weapon. And yes, I am aware that I mentioned at the beginning that I was a cynic. Overall, though, there are certain topics that bring the cynic out in me more than others. And one of those is charity, both the concept and ethos.

I'm not opposed to generous actions or donations to aid the poor, ill or helpless of this world. But I would stop at embedding those actions into a written constitution or similar document. Right now one of the debates doing the rounds on these shores is how much the arts will suffer with the impending cuts; regardless of whether Labour stays in power, or we get a Tory government. One of the ideas bandied around by the Conservative party is to have a more US-style philanthropy-based system, to which my reply is thanks, but, no, thanks. Like it or loathe it, the Arts Council functions as an independent entity whose commissioning process is not jeopardised - usually - by party politics. Scrap it, or downsize it and you'll be staring at a lifeless puppet, ready to move to where its owner tells it to.

Moreover, the concept of charity and the word as such carry with it (and this is my personal opinion) a stigma that is hard to shake off. If it's alms on which you depend, regardless of whether you are an individual or a nation, the way people see you will be coloured by that fact. My position, again very personal, is thanks for the crumbs, but I can make my own bread, thank you very much.

Thirdly, the innate power people have - and this has long been a topic of discussion with acquaintances à propos de the word 'empower' - is undermined by other individuals or organisations acting on your behalf. I call this the 'Bob Geldoff phenomenon'. When the former musician organised the Live 8 concert in 2005 in London, he 'forgot' to include African musicians both in the planning of the event and in the final line-up (Youssou N'Dour was only brought in after a public outcry), despite the fact that he said repeteadly that the aim of the event was to raise awareness of issues in Africa. How do you say 'Give us yer f*****g money' in Swahili, again, Bob? Or maybe, as a failed musician, you didn't fancy being upstaged by the likes of Baaba Maal and Souad Massi and went for bland pop instead, along the lines of Keane and Snow Patrol. Just a thought, a cynical thought.

The reasons I've stated so far as to why charity makes me feel cynical sometimes are not indicative of my position towards the act of giving. To me giving, when well meant enhances one's place in the world. But the problem for me is when we confuse who's supposed to benefit more from the act. And sadly, the evidence I come across more often than not is that it is the donor's comfort that takes precedence in this (sometimes unfair) exchange.

On a less cynical note I'm glad to be the emissary of good news for those who enjoy the rich cultural life London has to offer. Next Saturday, 20th March, I will be joining the sell-out crowd at Sadlers Wells to enjoy the spellbinding and majestic Compañía Danza Contemporánea de Cuba (Cuba's Contemporary Dance Company). At a personal level, it will be a most romantic occasion - thus, this second part of my Sunday post is the opposite of the first one - for it was thirteen years ago when I last saw this dance troupe. If you are visiting the British capital and fancy watching innovative and original works, then contact Sadlers Wells on 0844 412 4300 or pop by its website, http://www.sadlerswells.com/show/Danza-Contemporanea-de-Cuba. If you reside in London, then this is an opportunity not to be missed. Many thanks to Krista Booker and Havana Club for the complimentary tickets.

Next Post: 'Of Literature and Other Abstract Thoughts', to be published on Tuesday 16th March at 11:59pm (GMT)
Posted by A Cuban In London at 10:00

Labels: A Cuban In London, Bruce Springsteen, Cubans in London, music, This Land is Your Land