The Squid and the Whale (Review) 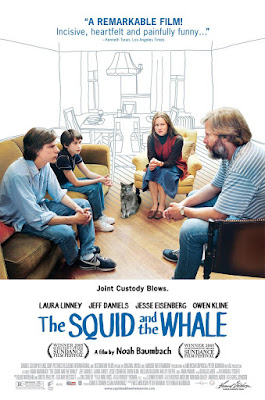 Sophie: Yeah. I mean, it's gross when he turns into the bug, but I love how matter of fact everything is.
Walt Berkman: Yeah, it's very Kafkaesque.
Sophie: [She looks at him oddly. She laughs] Cause it's written by Franz Kafka.
Walt Berkman: Right. I mean, clearly.

Disfunctionality usually thrives in the most trivial and inconsequential situations. When teenager Walt Berkman lies to his girlfriend about him having read 'Metamorphosis', his words are the latest porky in a long string of untruths, starting with him appropriating Pink Floyd's 'Hey You', performing it at a festival in his school and trying to pass it off as his own composition. But then, as the saying goes, 'like father, like son'.

'The Squid and the Whale' deals with the disfunctionality created by the estrangement of two parents in modern New York. University professor Bernard Berkman (played superbly by Jeff Daniels) is a successful lecturer but his writing career is in the doldrums. His wife, Joan (Laura Linney excels in her role), on the other hand, is gaining ground with her literary efforts. Their separation brings about a conflict that pits their two sons against each other with unforeseen consequences. Adolescent Walt sides with his father and starts copying him. Meanwhile, younger sibling Frank stays with his mum and his behaviour goes from erratic to abnormal.

Based on director Noah Baumbach's true childhood experiences, 'The Squid...' is a film that touches upon various subjects with subliminal messages galore. The beginning of the movie is soundtracked by young Walt intoning Roger Waters' immortal words: 'Hey you, out there in the cold/Getting lonely, getting old/Can you feel me?'. It's a way of letting us know that angst will be part of the film's emotional landscape. Frank gets into trouble for using semen to smear the books in his school library as well as a locker. That could well be a response to her mother Joan starting an affair with Frank's tennis teacher. Or it could be Frank's way of reacting to his father's snobbish personality.

The movie benefits from an intelligent script, a balanced mix of comedy and drama, sound direction and good performances from both leading and supporting actors. Furthermore, 'The Squid...' is part of a crop of films about the Big Apple, that are filling the gap left behind by director Woody Allen, when he upped sticks and decided to use Europe as his headquarters. We've had 'Synecdoche, New York' and before that 'Being John Malkovich', two vehicles, amongst others, that sought to make sense of existential quandaries. The difference is that in 'The Squid...' Jeff Daniels' Bernard Berkman comes across as a jealous, self-indulgent, chauvinistic has-been, as opposed to a troubled soul like Philip Seymour Hoffman's Caden Cotard or John Cusack's Craig Schwartz.

An acerbic divorce, sexual misbehaviour and plagiarism. It makes one not want to be part of the Berkman clan, yet, how delightful to be given the opportunity by director Noah Baumbach to become a fly on the wall and enjoy the spectacle. I hope you will, too.

Next Post: 'Sunday Mornings: Coffee, Reflections and Music', to be published on Sunday 25th July at 10am (GMT)

Labels: A Cuban In London, Cubans in London, movies, review, The Squid and the Whale