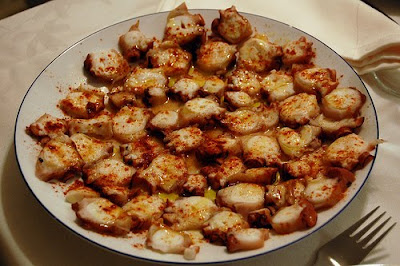 To celebrate Spain's success in the World Cup this section will be concentrating once more (as if we needed an excuse) on the cuisine from that Iberian nation. And this time we do it supported by a tapas specialist, Inés Ortega. According to Inés, "in principle tapas is a slice of bread topped with any ingredients, served hot or cold, and eaten with fingers or a fork. It's something to be done before a meal, but then tapas can often replace a meal. The point of tapas is that you're not locked into a formal meal. There's very little commitment in sampling tapa." (taken from Observer Foood Monthly, May 2010). So, what are we waiting for? Let's tuck in!

To tenderise the octopus it is best to freeze it before cooking. To cook it, bring a large pan of salted water to the boil, add the frozen octopus and cook for about 35 minutes, or until tender. You will need to test it, as the length of time depends on the age and size of the octopus. Drain well and rinse under cold running water. Remove and discard any remaining dark skin and cut the meat into small pieces with kitchen scissors.

Place the pieces in a bowl, pour the oil over them, season with salt, if desired, and sprinkle with hot paprika to taste. Mix well to ensure the octopus is thoroughly coated and serve immediately.
If this is not possible, transfer the octopus and oil to a heatproof bowl, cover with aluminium foil and keep warm in the oven until needed.

As a variation, you can also heat 175ml olive oil in a pan, add 25g roughly chopped onion and 1 garlic clove and cook over a low heat for 10 minutes. Remove the onion and garlic with a slotted spoon and discard. Remove the pan from the heat and stir in sweet paprika to taste. Add the flavoured oil to the octopus pieces, mix well and serve immediately.

I have selected a playlist that will leave you licking your fingers in the same way as the above dish. We open with Chris Botti & David Sanborn and their version of 'Flamenco Sketches', originally composed by Miles Davis for his album 'A Kind of Blue'. Great cover, this one is, and you also get to eat Pandora's nemesis, a relative of Paul, the omniscient octopus.

It wasn't until a few years ago that I came across Ben E. King, of 'Stand by Me' fame, and realised that he was the guy who had written 'Spanish Harlem', a song associated more often with Aretha Franklin. This performance is superb, I hope you enjoy it.

And to wrap tonight's session up and also to coincide with one of the hottest British summers in years, we're going off camping on a 'Spanish Caravan' accompanied by The Doors. This band deserves their own post, so amazing they were. Here's to the Spanish football team and to La Madre Patria. ¡Olé!

Next Post: 'Sunday Mornings: Coffee, Reflections and Music' to be published on Sunday 18th July at 10am (GMT)
Posted by A Cuban In London at 23:59