Insane in the Brain (Review) 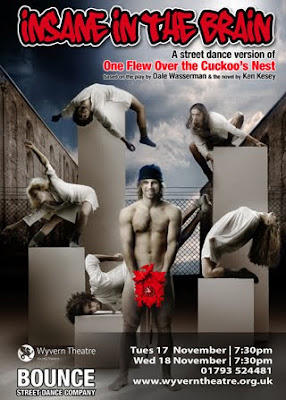 There are instances of artistic audacity that would bewilder even the strongest advocate for culture and creativity. For instance, what do you when you are presented with a piece based on a novel written by one of the most famous counter-cultural figures in US literature? Or when said book spawns a successful Broadway adaptation starring Kirk Douglas and Gene Wilder? Or when the play is then turned into a multi-award-winning movie, including best picture, best director and best actor?

And yet this is what the Swedish company 'Bounce' did with 'Insane in the Brain', a choreography based on "One Flew Over the Cuckoo's Nest". This is a title that one associates more with Jack Nicholson's free-spirited McMurphy going to war against the strict rule imposed by Louise Fletcher's Nurse Ratched than with streetdance.

Using the same psychiatric hospital setting, the hip-hop company's piece depicts the grim environment in which inmates are kept. As it happens in the novel, play and film, they are all under the rule of the cold and sadistic nurse Mildred Ratched. One day, a new patient, Randall Patrick McMurphy is transferred from a criminal unit to the mental institution since there is uncertainty about his diagnosis. From the beginning, when introductions are made, both guards and hospital residents are aware that the new arrival poses a challenge to Nurse Ratched's omnipotent governance. What follows after is a battle where human rights, society's miopia and misconceptions about mental illness all have leading roles.

Bounce is a rather unusual streetdance company in that their dramatic range works as well as their dance skills. To say that they are amazing performers would be mild to the extreme. The level of creativity, vision and risk-taking are formidable. And although there are references in the piece that are not suitable for a family-orientated matinee (oral sex, the 'f' word gratuitously used, a love-making scene that lasted far too long), the mix of different media and the bold approach to street dance are brilliant.

But there's another knock-on effect brought unwittingly by 'Insane in the Brain' (a title borrowed from the Cypress Hill track that is included in the show): maybe this is hip-hop's 'Philipic' moment. In the same way that Demosthenes raged against Philip of Macedon (hence the name) in the 4th century B.C., streetdance has been steadily and consistently raising its voice against the establishment. 'Insane in the Brain' is just the latest instalment of a trend that has seen the popular urban genre move away from its origins in 70s New York and adopt a more experimental and challenging style. In the last few years we've had Zoo Nation's 'Into the Hoods' (inspired by 'Little Red Riding Hood') showing off its street credo to full houses in the West End. Last December my wife and I took our children, not to a traditional Christmas pantomime of the 'He's behind you!' variety, but to Boy Blue Entertainment's 'Pied Piper' (based on the 'Pied Piper of Hamelin') at the Barbican. Again, the company performed to a sell-out crowd. What the two aforementioned shows have in common is that they have delved into the world of fairy tales, a literary style that one might not see at first as a match for the display of strength, speed and dexterity that hip-hop demands. And if we step away from dance for just a nanosecond and go into music, the fairy tale genre also features in urban music. In MC Solaar's 2001 album 'Cinquième As' the song 'La Belle et le Bad Boy' is a reworking of 'Beauty and the Beast', the only difference is that 'la Bête' is a criminal and the 'beauty' gets killed in the end as a consequence of following him ('Des projectiles partent quand une BM freine/Quand elle tombe, il a les larmes aux yeux/Deux balles de 22. Vingt deux ans adieu/Le contexte est plus fort que le concept/Son mec s'est jette dans les flammes il faut qu'il se lave avec'). More Bonnie and Clyde than Gabrielle-Suzanne Barbot de Villeneuve but you get the gist: hip-hop has raised its game.

Moreover, the stories from which Zoo Nation, Boy Blue Entertainment and Bounce have drawn their inspiration - whether they be fairy tales or counter-culture masterpieces - mirror streetdance's position in the performing arts world. Like Little Red, hip-hop has had to brave its way through the woods in order to arrive at, share and enjoy the spotlight with all the other dance styles. 'Insane in the Brain' could very well be depicting urban dance in the form of McMurphy rebelling against the narrow-mindedness of officials who tend to look down on streetdance as a lower category of bodily motion.

Bounce has created a truly spectacular show where each routine seems to outsmart the previous one. The beginning of the show depicting the symptoms of split personality condition is highly imaginative. The nightime bed choreography reminded me of the start of Pink Floyd's 'Money' in terms of synchronisation and harmony. The electro-shock sequence, set to System of a Down's 'P.L.U.C.K', conveys the pain and horror of a practice that was considered normal until a few decades ago. And while we're on the music, the tracks selected for the piece show how versatile this company is. They don't restrict themselves to just hip-hop melodies. From Mongo Santamaria's 'Watermelon Man' to Astor Piazzola's 'Libertango', Bounce shows an extraordinary ability to incorporate different rhythms into its routine .

The mad energy of 'Insane in the Brain' is a good example of how streetdance can be edgy and enterprising at the same time. Being deliriously bonkers never felt so good.

Note: I've uploaded three clips so that you can experience Bounce's creative power to the max. The first one is a promotional video by Sadler's Wells Theatre prior to the premiere of 'Insane in the Brain' in 2008. The second and third ones are extracts from the piece. I hope you enjoy them.