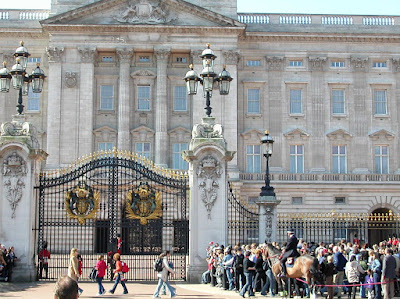 Thursday 21st February, Buckingham Palace, daytime but with poor visibility. Four characters are standing in front of the majestic building:
British Mother: Look at the guards!
Cuban Father: Yes! Wow! Two black guards!
British Mother: Yes, actually, that one over there is Asian!
Cuban Father: Two black guards, an Asian and a white one.
Half-Cuban-Half-British Son: What do you think the Queen is doing now?
Cuban Father: Brushing her teeth. She'll probably come out any minute now and scream at people: 'Stop f...... looking at my f...... house, will ya? Go and get a life, you motherf......!' And she will have toothpaste drooling all over her chin.
British Mother: She is probably playing 'hide and seek' so that people shout: 'I just saw the Queen! I just saw the Queen!'
Half-Cuban-Half-British Daughter: Doesn't she get bored of being a queen?
British Mother and Cuban Father in unison: No!
And we keep on walking...
Copyright 2008
Photo courtesy of Eufrates del Valle at El Imparcial
Posted by A Cuban In London at 15:48