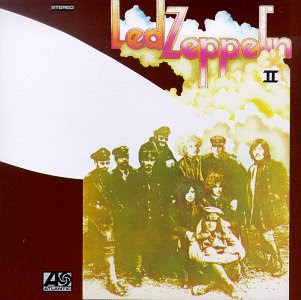 There are three famous guitar riffs that every aspirant to Jimi Hendrix's mantle vows to learn: 'Satisfaction' by The Rolling Stones, 'Smoke on the Water' by Deep Purple and ''Whole Lotta Love' by Led Zeppelin. Pedants will remark to Killer Opening Songs that there's also 'You Really Got Me' by The Kinks and 'Seven Nation Army' by White Stripes not to mention 'All Along the Watchtower' by Monsieur Hendrix, to which K.O.S. will reply, whilst shrugging his muscular shoulders: 'Bah, humbug. Maybe the last two, but not the first one. Nothing against Ray Davies and his boys, but in the scale of "phallic rock" (more about that later) melodies 'You Really...' comes up very short (pun unintended) when compared with the others'.

By the time Led Zeppelin came off stage at the Chatenay Malabry (Piston 70) in Paris on the 6th December, 1969, The Rolling Stones's free concert in Altamont had yet to start and its sad 'end of the sixties' label yet to be coined. In the meantime the Boeing 747 jumbo jet had already made its debut and the first draft lottery in the US since World War II had also taken place. It is in these circumstances that one of the better Killer Opening Songs of all times must be analysed.

Following their well-received debut album, 'Led Zeppelin', released in January 1969, the British band embarked on a series of concerts during the same year promoting material for their sophomore record. From the US to Sweden, from Denmark to Canada, Zep's bluesy, raw sound seduced thousands of youngsters and enticed a whole generation. The chemistry between Jimmy Page, Robert Plant, John Paul Jones and John Bonham played a major role in the band's ascension to the pinnacle of rock'n'roll. Although, to be fair, it was the group's 'fifth' member, manager Peter Grant, who made the impossible possible: Led Zeppelin remains one of the few bands (K.O.S. cannot think of any other) that never released singles in its entire musical career in the UK, only albums. A risky strategy when one takes into account that the pop industry had just accepted the three-minute song as the standard commodity. Under Grant's tutelage, the Zep roamed the vast realm of rock music practically unchallenged and it was John Bonham's untimely death that caused the group to disband.

The album 'Led Zeppelin II' built up on the various styles on which Jimmy and the boys drew their influences. And 'Whole Lotta Love' was the perfect Killer Opening Song. Based on a Muddy Waters tune, 'You Need Love, the Zep launched into a free blues riff for the intro until we come to the 'orgasm' mid-section. Plant's voice shouting: 'Woman, you need it!' was a bleed-through from a vocal recorded previously. Page decided to stick with it and 'phallic rock' was born.

I say 'born', but 'phallic rock' (K.O.S.'s term and definition) had been around for years ever since Elvis decided to shake his hips in a manner that horrorised polite US society. After him, most rock musicians, especially guitarists and singers, adopted the same pose with a slight variation here and there: legs wide apart showing off the bulge in their tight blue jeans, hands swinging in a windmill motion à la Towshend, or thrusting their crotch onto their - sometimes mainly female - audience like Mick Jagger. But it was the handsome, blond curl-haired frontman Robert Plant, wild, guitar wizard Jimmy Page and arms-like-a-builder John Bonham who put phalllic rock on the map. I did not forget John Paul Jones. Like many bass guitarists (see John Deacon from Queen), Paul Jones made a huge contribution to the Zep yet remained in the background most of the time.

The composition of phallic rock is as follows: in an ordinary four-strong rock band, two members will align themselves at the rear or sides whilst letting a third one hog the limelight. This third member can be a guitarist or singer, or both. For that see AC/DC, U2 and Black Sabbath. The ultimate aim of this process is to induce a cathartic state in the audience, a release, a visual and auditory orgasm. Hence the mid-section of 'Whole Lotta Love' and the inclusion of a theremin combined with Plant's howling screams of sexual pleasure. When the song debuted in the charts in the States (where it was released as a single) it was cut down to 3:10 instead of the original 5:33 and that orgiastic part excised.

Phallic rock was also characterised by relentless misogyny, rampant machismo and testosterone-fuelled bravado. And The Zep were the epitome of this trend: 'soul of a woman was created below' from 'Dazed and Confused'; "Lyin', cheatin', hurtin, that's all you seem to do. Messin' around with every guy in town (...) Drive me insane, trouble is gonna come to you" from 'Your Time Is Gonna Come'; 'Hey fellas, have you heard the news? You know that Annie's back in town? It won't take long just watch and see how the fellas lay their money down' from 'Heartbreaker'. But in their defense, K.O.S. would like to point out that since so many bands from the 60s and 70s were influenced by the blues from the Deep South and this was a genre not without some controversy in its male/female relationship, bringing the subject of misogyny up feels like nit-picking, especially in the presence of such good music. When Robert Plant sang: 'Squeeze me baby, till the juice runs down my leg/The way you squeeze my lemon, I'm gonna fall right out of bed' he was probably still a virgin.

K.O.S. favourite version of 'Whole Lotta Love' can be found in the 'BBC Sessions', a live, double CD covering a 25-month period in which the Zep sound incorporated elements of jazz and blues. On this record 'Whole Lotta Love' included a blues medley halfway through with songs by Robert Johnson and John Lee Hooker. Jimmy played a blinder on this number and Plant showed off his vocal prowess whilst the ever hard-working John Paul Jones provided the blood for this phallic rock band to keep its musical ziggurat up. And Bonham? Still pounding those drums up there, or down there, you never know.

'Whole Lotta Love' became an anthem beyond British and US shores. In Cuba K.O.S. used to headbang to it down at El Patio de María ('Maria's Yard', reference only for those in our thirties and forties growing up in 80s Havana) and the free-form mid-section was instantly a hit with the young Cuban generation wanting to liberate themselves from the state dogma. The song has been covered by a wide variety of artists, including this version here (I love it, I use it in one of my compilations tapes when I go out jogging).

Phallic rock faded out in the 80s - although both Kasabian and Kings of Leon are trying to bring it back - when it mutated into 'poodle rock' with the likes of Poison, Bonjovi and Mötley Crüe coming on board and introducing the 30-second guitar solo that became the standard amongst many rock bands, like pseudo-rock outfit, Europe. To the question of whether any female groups ever got a slice of the phallic rock pie, the answer is yes. However, a caveat, the posture adopted by these femmes was usually in tandem with that of Jimmy and his boys, only watered down a bit. See The Bangles and Heart. It is only with female soloists, in K.O.S.'s view, that the whole musical glans/foreskin/prostate connection loses some of its power and deflates (no pun intended, K.O.S. swears). Janis Joplin, Tina Turner, PJ Harvey, Fiona Apple, Patti Smith and Tori Amos (see her own version of 'Whole Lotta Love' here) are just a few examples of music - not just of the hard rock variety - written and performed without checking your crotch first. Unfortunately the establishment -mainly male critics - very often sees the aforementioned singers as nothing but an untamed bevy of succubi spewing out their male victims after a night of orgiastic excess. Plus ça change, plus c'est la même chose.

So, without any further ado, here's this week's 'Killer Opening Song'. And that bass hook is pretty good, too, huh?

Next Post: 'Living in a Bilingual World', to be published on Thursday 3rd September at 11:59pm (GMT)