What Makes A Good Writer? By Zadie Smith (4th Part)

This week Zadie tackles one of the more pressing concerns for aspiring writers. For parts one, two and three click here, here and here.

Tradition versus the individual talent

But before we go any further along that track we find TS Eliot,that most distinguished of critic-practitioners, standing in our way. In his famous essay of 1919, "Tradition and the Individual Talent", Eliot decimated the very idea of individual consciousness, of personality, in writing. There was hardly any such thing, he claimed, and what there was, was not interesting. For Eliot the most individual and successful aspects of a writer's work were precisely those places where his literary ancestors asserted their immortality most vigorously. The poet and his personality were irrelevant, the poetry was everything and the poetry could only be understood through the glass of literary history. That essay is written in so high church a style, with such imperious authority, that even if all your affective experience as a writer is to the contrary, you are intimidated into believing it. "Poetry," says Eliot, "is not a turning loose of emotion, but an escape from emotion, it is not the expression of personality, but an escape from personality." "The progress of an artist," says Eliot, "is a continual self-sacrifice, a continual extinction of personality."

These credos seem so impersonal themselves, so disinterested, that it is easy to forget that young critic-practitioners make the beds they wish to lie in, and it was in Eliot's interest - given the complexity and scandals of his private life and his distaste for intrusion - ruthlessly to separate the personal from the poetry. He was so concerned with privacy that it influences his terminology: everywhere in that essay there is the assumption that personality amounts to simply the biographical facts of one's life - but that is a narrow vision. Personality is much more than autobiographical detail, it's our way of processing the world, our way of being, and it cannot be artificially removed from our activities it is our way of being active.

Eliot may have been ruthlessly impersonal in his writing in the superficial sense (if by that we mean he did not reveal personal details, such as the tricky fact that he had committed his wife to an asylum), but never was a man's work more inflected with his character, with his beliefs about the nature of the world. As for that element of his work that he puts forward as a model of his impersonality - a devotion to tradition - such devotion is the very definition of personality in writing. The choices a writer makes within a tradition - preferring Milton to Moliere, caring for Barth over Barthelme - constitute some of the most personal information we can have about him.

There is no doubt that Eliot's essay, with its promise to "halt at the frontiers of metaphysics or mysticism", is a brilliant demarcation of what is properly within the remit of, as he puts it, "the responsible person interested in poetry". It lays out an entirely reasonable boundary between what we can and cannot say about a piece of writing without embarrassing ourselves. Eliot was honest about wanting both writing and criticism to approach the condition of a science he famously compared a writer to a piece of finely filiated platinum introduced into a chamber containing oxygen and sulphur dioxide. This analogy has proved a useful aspiration for critics. It has allowed them to believe in the writer as catalyst, entering into a tradition, performing an act of meaningful recombination, and yet leaving no trace of himself, or at least none the critic need worry himself with. Eliot's analogy freed critics to do the independent, radically creative, non- biographical criticism of which they had long dreamt, and to which they have every right. For writers, however, Eliot's analogy just won't do. Fiction writing is not an objective science and writers have selves as well as traditions to understand and assimilate. It is certainly very important, as Eliot argues, that writers should foster an understanding of the cultures and the books of the past, but they also unavoidably exist within the garden of the self and this, too, requires nurture and development. The self is not like platinum - it leaves traces all over the place. Just because Eliot didn't want to talk about it, doesn't mean it isn't there. 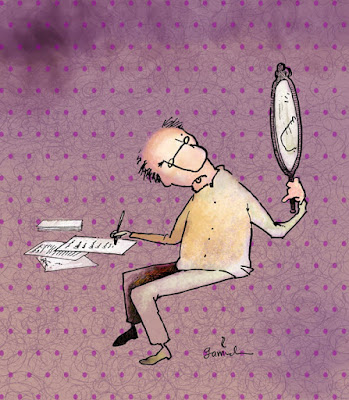