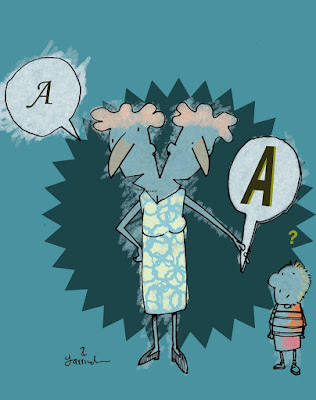 I found this story in The Guardian on Tuesday and it made my day. To think that there are so many ways in which to stimulate the minds of young people who are keen to learn a language. That's why I am still trying to get my head around the fact that the government decided to drop foreign languages as a compulsory subject at GCSE level a few years ago.
However, I gather that if I was faced with the prospect of learning a language that was not one of the modern ones, that is Portuguese, German, Italian, English and Spanish, I would probably get cold feet and backtrack. This teacher's experience showed me that sometimes all you need is a little bit of adrenaline at the right time.
He also addresses other topics like the eternal dilemma of having to speak in a foreign language in front of a group of strangers. And yet, my experience, at least with English and German, is that natives are rather considerate and most of the time go out of their way to help out if they can.
French was a different matter when I was at the Alliance. Whether I am now merely playing by stereotypes or not is a moot point but I remember when I was learning French how I enjoyed my lessons, but less the environment I was in. There was a lot of snobbery and an anti-Anglo-Saxon attitude, understandable as there has always been bad blood between the UK and France. But this was Cuba! They should have called it quits! Playing music in English during breaks was frowned upon and when I went back to Havana after spending a month in Britain in 1997, except for my classmates, the staff was just not interested, nor impressed, and no, they were not French... they were... Cuban.
Luckily, I persevered and adapted to the school, thus, making it to intermediate level. When the author of The Guardian's article, Rick Jones, mentions his embarrassment of having to speak out loud as a teenager, I was instantly reminded of the time when I learnt that there were three types of 'e' in French and they were, of course, pronounced differently. After long periods going through the motions of learning how to pronounce each 'e' correctly I managed to achieve such high level of expertise that I am pretty sure that even the recently deceased Marcel Marceau would have been proud of me.
Copyright 2008
Illustration courtesy of Garrincha
Posted by A Cuban In London at 22:19