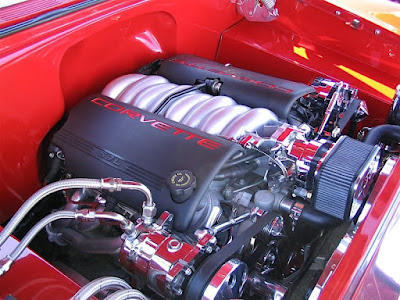 Open the front of a car and show me its insides and I will be legging it before you can say 'valve'. There is nothing more daunting and scary than that labyrinth of cables, pistons and plugs. Just before my third attempt to pass my driving test my instructor and I had a little run-through the various car parts I would be questioned on by my examiner. I am sorry to disappoint you my dear fellow bloggers, readers and posters, but I failed really badly.
Luckily I managed to scrape through on this subject in the actual test and was flunked twice in a row on my poor driving rather than on knowing when I needed to check the car oil.
And yet, this whole maze of tiny, medium and gigantic parts fascinates me no end. It is amazing to me how the combination of all these different components work together to move your car forwards or backwards, accelerate or slow down.
Sometimes music works in the same way. Certain combinations defy logic and go beyond our understanding.
Take my first example. On the one hand hand you have not only Nigeria's social conscience, but Africa's singing warrior. A thorn on the side of the corrupt government that ruled that West African nation for many years, Fela Kuti became a musical icon to many people around the world. His songs had difficult and complex arrangements and were heavy on the use of trombones, saxophones and trumpets. On the other hand you have 'l'enfant terrible' of prog-rock, Mr Ian Anderson, he of English band Jethro Tull, whose complicated and poetic lyrics delighted those of us who came to them via other groups from the same era: Yes, Emerson, Lake & Palmer and Genesis. The result is an intrinsic, comprehensive and mind-blowing collaboration between these two musicians which resembles the inner world of a car. Masterful.
My second offer is a mélange of blues, country and rock, and just like pistons and valves working together inside a vehicle, these various rhythms have a nice, funky beat going on that makes want to get up on my feet and dance with total abandon. I discovered The Audreys via Radio Paradise, the online radio station that should be a blueprint for wanna-be radio stations everywhere. Groovy.
Number three song this weeks brings what is normally called a chanteuse. She is a cross between a busker (which she has done after eloping to Europe following the success of ther debut album, strange way to celebrate, ain't it?), a jazz singer and troubadour. Madeleine Peyroux is not your traditional singer and her voice smacks of a throaty, powerful engine revving up nicely as all the different components conjure up their magic to make the car move. Smoky.
Finally this song is living proof that music is cyclical. Salsa is rooted mainly in son, a hybrid between African rhythms and their Spanish counterparts. And as the following track shows Orchestra Baobab took it back where it came from and transformed it into an African song with Latin undertones. Compelling.
And this is all for this week. In the meantime I am still trying to work out what to do when going on a long journey. What's the requirement my tyres must meet before I set off again?
Copyright 2008
Posted by A Cuban In London at 20:26