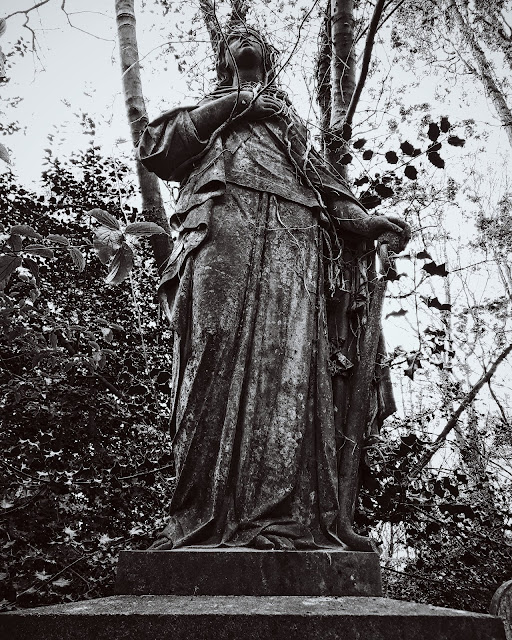 A serotinal morning announces itself by blending extant estival greens with emerging autumnal reds. Perfect start for a Covid-delayed tour of London’s Magnificent Seven. These are Victorian-era cemeteries that were created to ease pressure on parish burial grounds.

It’s logical that as a north London resident I kick off at Abney Park, a graveyard opened in 1840, in nowadays trendy Stoke Newington. I don’t spend much time inside, though. I’m so used to these grounds, having found them by chance many years ago, on one of my many cycling jaunts. During the first lockdown in 2020 Abney was one of the two places, along with nearby Clissold Park, my girlfriend and I frequented.

Like those belonging to the non-conformists buried here. These were rebels who defied the ways of the Church of England and refused to align with a particular Christian denomination. The chapel (derelict and rundown, though it is) was designed in a manner that showed no bias towards a single Christian sect.

In addition, if like me, you are into the music of the late singer Amy Winehouse, you’ll be interested to know that her video “Back to Black” was partly shot here.

With the sun beginning to beat down on the pavement and my stomach rumbling, I hop back on my bicycle and head off for my second destination: Tower Hamlets Cemetery Park.

No matter which route I choose, everywhere is bumper-to-bumper. The start of the academic year, road closures and the proliferation of LTNs (low traffic neighbourhoods, a polarising issue if ever I saw one) means that from Amhurst Road and all the way down Mare Street to Roman Road, I have to zigzag my way around buses, lorries and cars.

Some years ago I came up with a moniker for this area: the Hipster Republic of North, North-eastern and Eastern London. Its borders have changed slightly (gentrification works in mysterious ways), but the core of it remains the same. It starts in N16 Stamford Hill and continues through Stokey, Dalston, Hackney, Hoxton, Homerton and Shoreditch. From £5 bowls of cereal to ironic beards, from zany and thought-provoking graffiti to checked shirts, this is the new, creative (and some might say, overpriced) London.

One of the tell-tale signs that lets you know you have arrived in Hipster Land is the frames you see either on the road or parked. I’ve been dipping in and out of Laurent Belando’s excellent book, Urban Cycling, so I’m able to recognise some of the specimens. The bicycle par excellence in these parts is the fixie, or its close relative, the single speed two-wheeler. Understandable when you notice how flat most of east London is.

But it’s not just the road surface that contributes to the ubiquitousness of these machines. Both fixie and single speeds are fashion statements. Their cultish and aesthetic appeal is all part of the phenomenon I’ve come to describe as “the individualisation of cycling” (some people would call it “fetishisation”). A bicycle is not just a bicycle. A bicycle is an extension of a rider’s individuality.

Furthermore, there’re also the professions. Fixie/single speed owners tend to belong to that turn-of-the-century cabal that spread slowly through previous no-go areas in east London (I still remember when someone told me Mile End was known as “Knife End”) bringing rents and house prices up. They are the artistic directors, marketing managers, graphic artists, web designers, performers, project managers, communications and media managers. Of course, their bikes have to say something about them in the same way the brands they create say something about their company.

Following hot on the (w)heels of the fixie and single speed come the road bike, porter bike and vintage two-wheeler. Today I spot an equal number of these frames on the road. From just past Hackney Empire to Old Ford Road, off Cambridge Heath Road, they seem to be everywhere.

Out of the three, it’s both the porter and vintage bikes I’ve got a soft spot for. Road bikes, or “racing bikes” leave me cold. Perhaps, it’s their aggressive look, too much Tour de France, incongruous on these narrow streets.

The porter and vintage bikes, on the other hand, invite effortless elegance and style. Today I see a lot of what was formerly known as girls’/women’s bicycles and have been thankfully re-baptised as “step-thru bikes”. Just a clever way of convincing gents that they don’t have to swing their legs over their seats the whole time to prove they’ve got a pair.

Rolled-up yoga mats poke out of baskets sitting at the front of porter bicycles. In others, pooches sit comfortably, a gentle breeze ruffling their hair. In open defiance to speed or terrain, porter and vintage bikes are the non-conformists of our age. Perhaps a place at Abney is already waiting for them when they reach the end of their cycle.