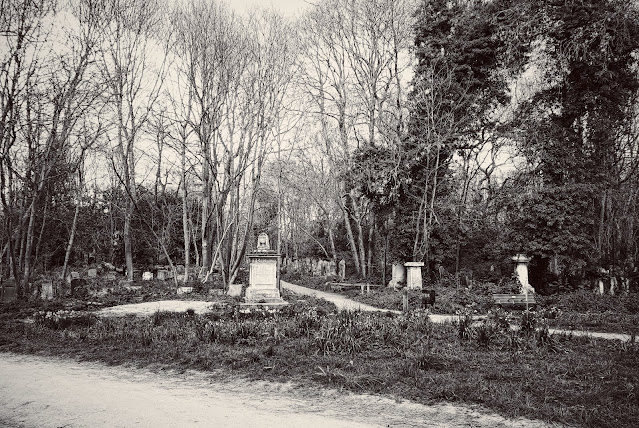 My early morning cycle ride to Abney Park sets me up for the journey ahead. Carrying on to Mile End, my body welcomes Hackney’s flat terrain. Not too much exertion yet.

At the bottom of Globe Road I turn left onto Mile End Road in order to continue my journey towards Tower Hamlets Cemetery Park. I’m now on the previously much-maligned Cycle Superhighway 2. Hard to believe that it was only a few years ago that this long road, running from Aldgate East to Stratford, was nothing more than a blue strip with no dividing line  between motor vehicles and bicycles.

The difference between then and now couldn’t be starker. At present an off-road, segregated lane snakes almost all the way eastwards.

I fall behind a head-down, traffic-charging, heavily tattooed fellow cyclist. “Fellow” might be stretching it a bit. With his brake-free, fixed-wheel track bicycle, he belongs to the sort of tribe for whom purity in cycling is all that matters. A frame, two wheels, pedals, handlebar and seat (D-lock hanging from his rucksack, of course). That’s it. Who needs my seven gears when his own muscular legs can propel him anywhere he wants to go?

His D-lock becomes a blur before I go over the canal. I’m now in Tower Hamlets, home to the largest Bangladeshi community in the UK. Saris are a common sight and I immediately think of Sujata Bhatt’s poem “My Mother’s Way of Wearing a Sari”. I still remember a few lines but I will have to look up the rest when I get home.

broken up by the moon’s

and in this room without a mirror

in this room where we all sleep together

she turns away from the windows-

her glass bangles pushed up, away

so they are motionless on her arms

In the darkness she finds her sari

and begins to wrap it around

her waist – her right hand is firm

fanning in and out of the waves-

so fast I cannot count them

By the time I enter Tower Hamlets Cemetery Park the sun has inched further up on the cloudless sky. I’m beginning to feel the effect of this early September’s Indian summer.

Unlike other members of the Magnificent Seven (Highgate, Abney and Kensal Green, for instance) THCP is not a celebrity-magnet. In fact, this cemetery almost ceased to exist in the mid-to-late 60s. At the time the Greater London Council (GLC) decided to clear the graveyard in order to make way for a brand new park.

The GLC’s plans hit a wall when many local residents, whose relatives were buried here, voiced their disapproval. The idea was shelved, but not before a section of the grounds was cleared for the intended park.

Tower Hamlets Cemetery Park’s proximity to the Docklands might be an explanation for the number of sailors interred here. Many of them lie in unmarked public graves.

Like Abney Park, THCP has a scruffy look. Paved paths and bush-covered trails share space equally. Personally speaking, I love it. The grounds have an air of wilderness about it. Plants and flowers grow almost undisturbed and species vary between woodland and meadow.

There’s however a sad story behind THCP’s “rough” look. During the Blitz, the Luftwaffe targeted the aforementioned Docklands (the Thames being a centuries-old major trading and shipbuilding area) which resulted in the East End being left in ruins. Many homes were left uninhabitable, shops and local business destroyed and a third of London’s docks wrecked. Tower Hamlets Cemetery Park suffered a similar fate unfortunately.

Trivia moment of the day. I learnt recently that one of the graveyard’s most famous memorials belongs to Joseph Westwood. This man ran a shipbuilding company. Eventually the company became known as Thames Iron Works. Some of the employees put a football team together. With the passing of time, the football team became West Ham United FC. The team’s origins are still referenced in nicknames such as “The Hammers” and “The Irons”.

Reaching-out me would have loved to share this information with my “fellow” track bicycle rider, but I doubt he’d have stopped to listen. It looked as if he had places to rush to, his D-lock hanging from his rucksack as he disappeared in the distance.