Nunhead: from hamlet to architectural gem 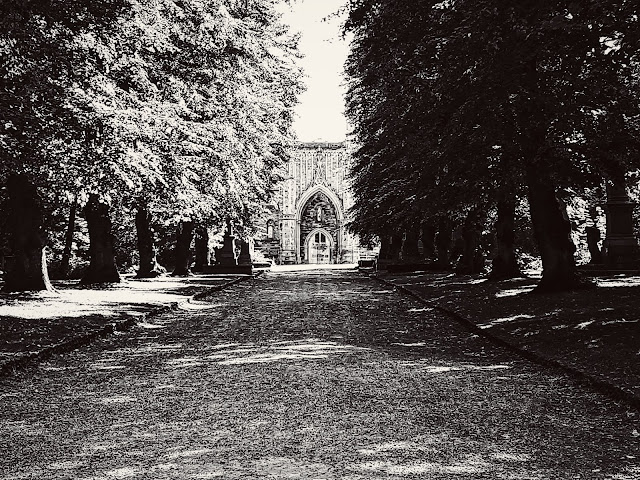 The first few days of the ninth month of the year are meant to usher in change. This change is of a slow nature and transition, though. It’s as if summer has trouble vacating its room and autumn is too lazy to move in. The unexpected weather situation plays out in people’s choice of clothes. Instead of long-sleeved tops and hoodies, we have vests, cropped tops and the odd bare-chested, beer-bellied bloke on display on the Regents Canal towpath.

I decide to take the longer route to Nunhead Cemetery; down the canal, Limehouse Basin-bound, instead of the faster and more direct one down Whitechapel and Mansell Street. I’m in no hurry and could do with a break from motorised traffic.

It’s logical that as a cyclist my eyes are fixed either on what’s ahead of me or on the ground. Factor in regular shoulder checks behind me and what this means in reality is that I miss a hell of a lot of what goes on above.

The end of summer signals migration for many birds. Whilst I’m still none the wiser when it comes to our winged friends (this was my homework from the first lockdown and I never got around to completing it), I’m aware that swallows are about to head south once more.

Still riding as carefully as I can, I scan the skies above me every now and then. There are no signs of swallows, or swifts (I often confuse the two). A V-shaped skein of geese passes me overheard, its quasi-military flypast formation a beauty to behold.

What I do notice is the long, white trail of a plane on the cloudless sky. A rare sight just a year ago, these other birds (of a metallic winged nature) are making a quick return to our airspace.

Over the walls of a school on the banks of the Regents Canal, I hear laughter. It’s the sort of laughter that makes me nostalgic for those eleven plus years I worked in primary schools. There’s no sweeter sound to make my heart sing than that of children playing during morning break or at lunchtime, making up their own games, giving a makeover to others or bringing back old ones.

I leave the off-road path and join the westbound traffic on the A1203. Again, I’m surprised by the amount of vehicles on the road. It’s not even noon yet, however it’s a horns-beeping and free-fumes-for-all motor festival here in east London.

Cycling over Tower Bridge and heading south of the river, I wonder (not for the first time) how Londoners feel about the Thames. I was born by the water. The sea was a few minutes away from my flat in Havana. And polluted though the water is, we love sitting by it, on the Malecón (seawall), declaring our love to it. Away from it, almost every single habanero I know feels nostalgic for the sea. But a river is not the sea. The vastness of the latter is limited by the banks of the former. At the same time, this city’s history is closely linked to water. The first settlements were based near the Thames. The current site of the City of London is the original Londonium, named so by the invading Romans who made their way along the river.

We must also take into account the sheer size of London. Would someone living in the sticks (say, Barnet or Bromley) feel the same way about the Thames as someone living in Greenwich or Westminster? Propinquity tightens bonds, in my opinion. A closeness that Wilfred Owen’s ghost feels himself in the poem “Shadwell Stair”, as he moves “along the wharves by the water-house/and through the cavernous slaughter-house”.

Built in 1840, like Abney and Brompton cemeteries, Nunhead was a small village surrounded by market gardens and open fields. Unlike five of the other “magnificent seven” (Highgate Cemetery sits on a hill), Nunhead rises to two hundred feet above sea level at its highest point. On a clear day, in the distance you can see the City of London and its (ugly, in my opinion) all-domineering, towering high-rises, St Paul’s Cathedral and even Alexandra Palace.

The silver lining for the graveyard, especially for its trees and wildlife, came in the 1960s and 70s. Unable to earn any revenue from the grounds, the United Cemetery Company left it to its own devices. Nature took over and the cemetery changed from lawn cemetery to meadow and woodland. Bird species include green woodpeckers, tawny owls and ring-necked parakeets. Amongst the trees, specimens include the horse chestnut, the gingko and the oak.

Nunhead has three Grade II-listed buildings: the two gate lodges and the Anglican Chapel. The latter was destroyed by an arson attack in 1976. Thanks to a Heritage Lottery Fund the building was refurbished and made safe and accessible to the public in 2001. It is nowadays used for theatre and music performances.

As I unlock my bicycle outside Nunhead I hear fluttering overhead. I look up and I think I see a couple of swallows criss-crossing the air. But, then, again, they could also be swifts. You never know. And I’m none the wiser.